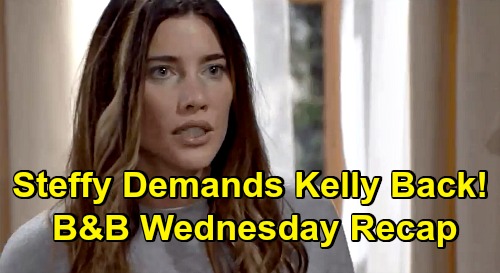 The Bold and the Beautiful spoilers recap for Wednesday, September 23, reveal that Steffy Forrester (Jacqueline MacInnes Wood) screamed at Liam Spencer (Scott Clifton) that he couldn’t take Kelly Spencer (Colette and Avalon Gray) from her.

Steffy and Liam argued as Steffy paced and pled with Liam to bring Kelly back inside from the car. Agitated, Steffy yelled at Liam that he had no idea what things were like for her, and that she wasn’t some kind of junkie.

Liam wouldn’t back down, and he argued that Kelly could have been seriously hurt while Steffy was passed out from the pills. “You come in here and you think you’re perfect,” Steffy fumed.

“How dare you keep me away from my child!” Liam argued back that Steffy had lied about the pills and that even Steffy’s doctor didn’t know about the pills. “Kelly can’t be in the middle of this,” Liam said.

Steffy started ranting some more, saying that Liam was going to take Kelly to Hope Spencer (Annika Noelle), and that she already lost one child to Hope. “I thought you loved me!” Steffy wailed. “We were so connected and happy, and you walked away! You will not have my child, too!” Steffy sobbed.

Liam said that Steffy clearly had a problem and needed professional help, then he took off with Steffy screaming after him and crying out Kelly’s name.

A short time later, Thomas Forrester (Matthew Atkinson) arrived at the cliff house and found Stefy frantically tearing the place apart looking for her car keys. Steffy was wild and out of control, and Thomas immediately knew that something was wrong.

Steffy yelled at Thomas to leave, and she ranted about needing to find her keys.

Through Steffy’s ranting, Thomas learned that Liam had been there and had taken Kelly. Thomas was immediately upset, as a very hyper Steffy went on about how Liam stole Kelly because she was napping on the couch.

Thomas wanted Steffy to stop, and he thought that it seemed a little over the top for Liam to have taken Kelly. Suddenly, Steffy found her car keys and raced out of the house before Thomas could stop her.

At Brooke Logan’s (Katherine Kelly Lang) house, Brooke and Hope talked about Liam, and Hope shared that it was a little frustrating watching Liam worry about Steffy so much.

Brooke praised Hope for stepping up and helping to care for Kelly while Steffy was injured. Hope said that she loved Kelly and always wanted her to feel welcome there.

Liam came in the room, having just dropped Kelly off at the cabin where Donna Logan (Jennifer Gareis) was watching the kids. Liam seemed upset to Hope and Brooke, and Liam recounted everything that had taken place over at the cabin – how he found Steffy passed out, then how found the pills and ultimately took Kelly out of there.

Brooke and Hope were shocked, and they surmised that Steffy got addicted to the pain pills after her accident.

Liam then started lamenting about how hard it was to take Kelly from Steffy, and Hope urged Liam not to beat himself up over it. As they were talking, Steffy burst in the room, and Liam was aghast that she had apparently driven there. “Where did you hide her!?” Steffy fumed.

Steffy was completely out of control and lashed out at Hope and Liam. “I want my daughter NOW!” Steffy screamed, as Hope, Brooke, and Liam wondered what to do next.

That was a terrific episode of B&B, and you won’t want to miss tomorrow’s episode! Stick with the CBS soap and don’t forget to check CDL frequently for the latest Bold and the Beautiful spoilers, daily episode recaps, and news. We’ve got you covered!