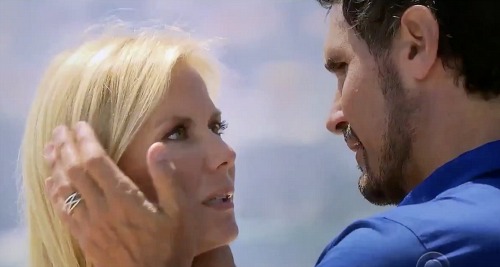 The Bold and the Beautiful (B&B) spoilers preview update for the week of April 27-May 1 teases that the drama will heat up. B&B fans got an early start on the “Escape to Monte Carlo” theme, which will be featured in the week ahead. Friday’s episode highlighted the Spectra Fashions vs. Forrester Creations fashion showdown, which was a ton of fun and brought back some characters we hadn’t seen in a while.

Monte Carlo will remain the backdrop for B&B’s upcoming episodes – and there’ll be some wild moments that you might’ve forgotten. Encore shows like these are a great opportunity to jog your memory on certain plot points or even see episodes you missed entirely.

Newer Bold and the Beautiful fans will definitely want to build on their knowledge of rivalries and soapy shockers.

Speaking of shockers, one of those will involve when Steffy Forrester (Jacqueline MacInnes Wood) attacked Quinn Forrester (Rena Sofer)! They had a Monte Carlo brawl over Quinn’s fling with Eric Forrester (John McCook), which we know turned into a lasting love story.

However, Steffy was boiling mad at the time and took her chance to slap Quinn into another dimension.

There’ll be two episodes of behind-the-scenes footage this week, so look for those on Monday and Tuesday. PopTV viewers might’ve seen these “Become Bold and Beautiful” specials before, but this will mark the first time they’ve ever aired on CBS.

As part of this extra content, Jacqueline MacInnes Wood is interviewed about that fierce hand to Quinn’s face. “The slap was real,” Wood admits with a laugh.

The Bold and the Beautiful’s weekly preview video ends with another Monte Carlo clip. Bill Spencer (Don Diamont) shares a romantic yacht moment with Brooke Logan (Katherine Kelly Lang) and insists, “I want to be with you forever.”

Bill’s about as bad as his waffling sons! “Brill” fans should enjoy these scenes though – especially when they cap things off with a steamy kiss.

RT if you’re excited for “Becoming Bold and Beautiful.” These documentary-style episodes on Monday and Tuesday feature rare, behind-the-scenes footage of cast and crew in Monaco and have never been seen before on @CBS! #EscapeToMonteCarlo starting tomorrow on #BoldandBeautiful. pic.twitter.com/UIweWqcnQ1