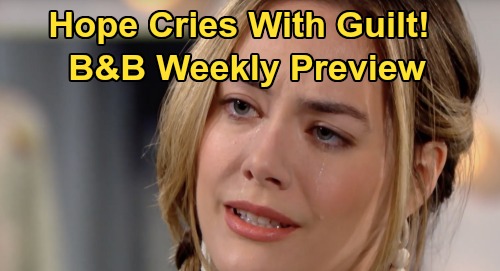 The Bold and the Beautiful (B&B) spoilers preview for the week of February 17-21 tease that the drama’s about to heat up. For starters, Liam Spencer (Scott Clifton) and Thomas Forrester (Matthew Atkinson) will get caught in their latest argument. After Zoe Buckingham (Kiara Barnes) listens in, she’ll seek answers from Thomas about his true motives.

Naturally, Thomas will say all the right things and promise he’s indeed moving on from Hope Logan (Annika Noelle). Despite that little voice telling her something’s wrong, Zoe will do her best to ignore it and focus on her future with Thomas. She won’t want to believe that he’d manipulate her like Liam claims.

Hope will overhear part of Thomas and Liam’s shouting match as well, so she’ll confront Liam about the incident. Her thoughts on the matter will only prove to Liam that Thomas’ manipulation is succeeding. Hope, on the other hand, won’t think Thomas is so bad. At least he’s the kind of guy who’s loyal!

Nevertheless, Liam will keep his eye on the prize and that means exposing Thomas. He’ll decide he’d have better luck with Zoe than with Hope, so he’ll corner Zoe and urge her to believe him. Liam will want Zoe to see that Thomas is using her, but she just won’t think so. Based on the way Thomas has behaved in Zoe’s eyes, she still won’t really think Hope’s on his radar.

Of course, Liam will insist that’s just what Thomas wants Zoe to think. He’ll make a passionate speech about all the red flags that Zoe’s ignoring, so he’ll succeed in giving her a few more doubts. The Bold and the Beautiful spoilers, updates and news all point to growing concerns for Zoe.

Back with Hope, her guilt will rev up as Thomas uses Douglas Forrester (Henry Joseph Samiri) to his advantage once again. Thomas will make sure the kid goes on and on about how much he wants Mommy and Daddy together. He’ll think it’s the perfect way to set the stage for his marriage proposal to Zoe, which is coming up by the end of the week.

Thanks to Liam’s wise warning, B&B spoilers say this proposal will leave Zoe a bit unsettled. Part of her will be thrilled that Thomas would ask her to marry, but another part of her will have to wonder why. Zoe will expect Thomas to prove his love before she makes this level of commitment, so Thomas will have to tackle a surprising demand.

It’s clear that when it comes to Hope, Thomas will push every button he has to. The Bold and the Beautiful spoilers say Thomas will count on his hard work paying off in the end. He’d better watch out for determined Liam though! Liam will vow to expose Thomas – one way or another. He’ll declare that to Hope and stand by it until it actually happens.

B&B fans will be treated to some heated confrontation and major shockers as this storyline progresses. We always have all the latest Bold and the Beautiful updates and news here at CDL, so check back in regularly!