The Bold and the Beautiful Spoilers: Week of October 5 Preview – Zoe Flirts With Hot Zende Behind Carter’s Back 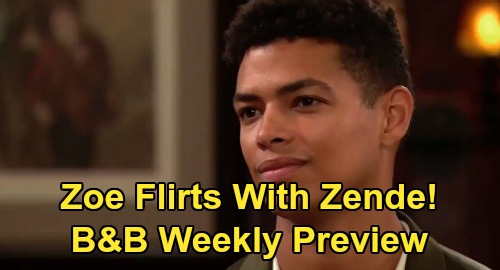 The Bold and the Beautiful (B&B) spoilers preview teases that a big return is coming during the week of October 5th on the CBS soap. It’s been a while since Zende Forrester Dominguez (Delon de Metz) has been around Los Angeles, but on Wednesday, October 7th, Zende will make his return to Forrester Creations.

B&B viewers will remember that the role of Zende was previously played by Rome Flynn, so this is a big return in more ways than one.

The new B&B preview for the week of October 5th shows Zende interacting with Zoe Buckingham (Kiara Barnes) and calling her out on some clear flirting on her part.

According to B&B spoilers, Zende’s homecoming from Paris will be a surprise for his family in Los Angeles, and he’ll quickly meet Zoe, who wasn’t on the Forrester scene when Zende was last around.

Of course, one big question will be what’s happened between Zende and his wife Nicole Avant Dominguez (Reign Edwards).

Will Zende and Nicole be on the outs, or perhaps separated or divorced? The promo indicates that Zoe might be one of the first people to encounter Zende when he returns, as she tells him that word is about to spread about him like wildfire.

It seems that Zende’s designing career has really taken off since he’s been away, and in fact he’ll be a “hot commodity,” or so Zoe claims in the promo.

The Bold and the Beautiful spoilers indicate that Zende will end up competing against Thomas Forrester (Matthew Atkinson) in a designing capacity, so could we possibly see a fashion showdown planned between the men?

Whatever the case, Zoe’s behavior in the preview promo is a little surprising, since she’s clearly flirting with Zende. In fact, Zende asks her point blank if she’s flirting with him, and Zoe replies, “Ok, well if you have to ask, I guess I’m not doing a great job.”

Given that Zoe has just begun a relationship with Carter Walton (Lawrence Saint-Victor), it’s a little odd that she’s openly flirting with a new guy…especially a new guy who may be very married still.

Of course, promos can sometimes be misleading, so Zoe’s flirtation as it is portrayed in the promo could be more about Zende’s designing prowess than Zoe actually wanting Zende as a romantic interest.

Besides, Zende and Carter are supposed to be friends! We’ll see what unfolds this week on the show, and what the rest of the week brings on the Carter/Zoe/Zende front.

It looks like we’re in for an exciting week, so stay tuned! We’ll give you updates as B&B news comes in. Be sure to keep CDL bookmarked so you don’t miss any of the latest Bold and the Beautiful spoilers, updates, and news.