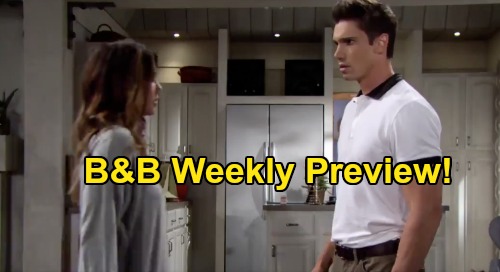 The Bold and the Beautiful (B&B) spoilers tease that the new B&B preview promo for the week of September 14 is out, and it teases a moment that Steffy Forrester (Jacqueline MacInnes Wood) fans have been waiting for – the first kiss between Steffy and John “Finn” Finnegan (Tanner Novlan).

As B&B viewers know, Finn has been coming to visit Steffy regularly, and he recently sat down with Steffy and was one of the first people to really listen to her in a long time.

During their talk, Steffy opened up about her devastating loss of Beth Spencer (River Davidson and Madeline Valdez), whom she thought was her adopted daughter for a while.

Steffy also voiced her ongoing grief over her sister Phoebe Forrester’s (MacKenzie Mauzy) death – something that Steffy rarely opens up about. Finn really showed that he cared, but during the week of September 14, it will become readily apparent to Steffy that Finn sees her as much more than a friend.

According to B&B spoilers, Finn will tell Steffy how he feels, in a very straightforward and “Finn like” manner. Viewers have already seen that Finn doesn’t pull punches and basically tells it like it is, so he’ll lay his feelings on the line and hope that Steffy feels the same way.

Steffy will, and she’s shown in the new B&B promo walking up to Finn and sharing a kiss with him confidently.

Of course, you’re probably aware that there will be a bit of trickery in showing that kiss, since the actors playing Steffy and Finn weren’t able to actually kiss due to COVID-19 restrictions.

Fortunately, B&B had a good solution for a stand-in for Steffy – Tanner Novlan’s wife, actress Kayla Ewell. No mannequins were used for Steffy and Finn’s kissing scene; instead, Kayla stood in for Jacqueline MacInnes Wood since they do resemble each other quite a bit.

Back on September 3, Kayla posted a picture of herself and Tanner in the car at CBS Studios on her Instagram Feed, indicating that she was headed to work with Tanner for the day.

It looks like that was filming day for the big “Sinn” kiss scene that viewers will see during the week of September 14. Tanner and Kayla are all smiles in the picture, clearly having had a great time together.

And fans couldn’t be more thrilled – there’s definitely a contingent of Steffy fans who have been itching for Steffy to move on past Liam Spencer (Scott Clifton), and this week will be the start of something brand new for Steffy and Finn.

Of course, that’s not to say that it’s going to be all happy and free from here, since Steffy is struggling with dependence on opioid painkillers.

This week on the CBS soap will also bring Steffy getting her own illegal refill of painkillers, which will come from Thomas Forrester’s (Matthew Atkinson) friend Vinny Walker (Joe LoCicero).

That sounds like a recipe for disaster, and at some point, we suspect that Finn will find out about it. But for the meantime, fans can enjoy that “Sinn” kiss and Steffy’s first steps toward moving on from Liam.

It looks like we’re in for an exciting week on the Bold and the Beautiful, so stay tuned! Remember to keep CDL as your go-to source for all things B&B. We’ve got you covered with all the hot news, sizzling spoilers, and daily episode recaps like nowhere else!

Get ready for a week full of Sinn on #BoldandBeautiful! 👏 B&B is new this week on @CBS and @CBSAllAccess. pic.twitter.com/1K5UqXGG6d

When Mom & Dad get to work together ??