The Bold and the Beautiful Spoilers: Wyatt & Flo Ready For Marriage – Quinn Comes Between Them, Threatens Relationship? 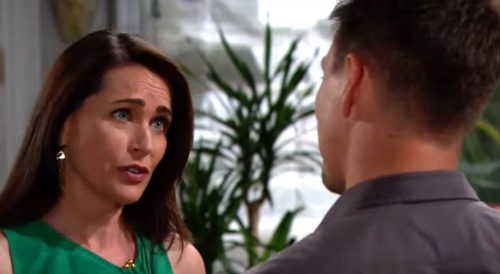 The Bold and the Beautiful (B&B) spoilers tease that Wyatt Spencer (Darin Brooks) and Flo Fulton’s (Katrina Bowden) relationship has been on the back burner for a while now on the show.

Of course, B&B viewers will remember that Wyatt and Flo had great drama back when Sally Spectra (Courtney Hope) was coming between them and faking her own terminal illness to do it. But ever since that storyline ended, we haven’t seen much of Wyatt and Flo.

That leads us to wonder what’s next for the couple that fought so hard to be together. Given that Wyatt and Flo are so happy and in love, it makes sense that they might want to take their relationship to the next level and get married.

But first, it appears that they’ll have some more unwanted drama in their lives…in the form of Quinn Forrester (Rena Sofer).

According to B&B spoilers, Quinn is soon going to be without a place to live, which can only mean that Eric Forrester (John McCook) is going to kick her to the curb.

That’s going to be devastating for Quinn, who will lose her entire existence at the Forrester mansion. It looks like Flo and Wyatt will step in and ty to help Quinn as best they can, but since Quinn can be pretty needy, it will probably be a big drain on Wyatt and Flo’s relationship.

And to make things worse, The Bold and the Beautiful spoilers say that Flo will actually extend an invitation to Quinn for her to stay at the beach house. It seems that Flo might just blurt out the invitation without talking about it with Wyatt, and Wyatt’s going to be beside himself.

We think it’s safe to say that Quinn’s going to turn into a third wheel in Wyatt and Flo’s relationship, and she’s probably going to be a bit of a nuisance.

Of course, this may have some real day-to-day consequences for Wyatt and Flo, who are used to having the place to themselves.

And let’s face it, Wyatt and Flo are at the stage in their relationship when they really need their alone time and privacy – and something tells us that they won’t get much privacy with Quinn hanging around and lamenting about how everything went wrong with Eric.

Wyatt may even be feeling fed up with his mom and her schemes at this point, so he’ll probably really feel the stress of having Quinn around.

Wyatt isn’t the best at handling stress, either, so we can probably expect to see the strain of having Quinn at the beach house wear on him, and that’s bound to affect his relationship with Flo at least somewhat.

Hopefully for Wyatt and Flo, Quinn won’t be around at the beach house for too long. Perhaps Eric will consider taking Quinn back, or maybe Quinn will have to find a place of her own – but something’s going to have to give for Wyatt and Flo’s sake!

How long do you think that Wyatt and Flo will be able to take Quinn’s presence at the beach house? Stay tuned to B&B and don’t forget to check CDL often for the latest Bold and the Beautiful spoilers, news, and daily episode recaps.