BY Heather Hughes on January 23, 2020 | Comments: one comment
Related : Soap Opera, Spoiler, Television, The Bold and the Beautiful 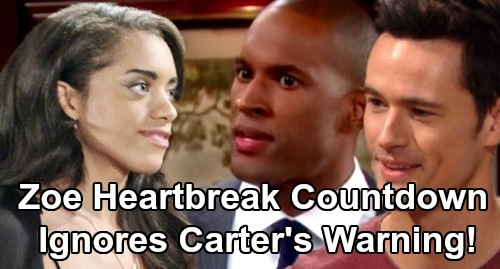 However, it’s Carter’s initial approach that’ll leave Zoe surprised and flattered. Carter will start out by paying Zoe a compliment.

Carter will gush over Zoe’s beauty and perhaps point out that she could have her pick of handsome men. Carter might imply that Zoe could have them lining up around the block! He’ll use this flattery angle to express confusion over Zoe’s interest in Thomas.

After all, Zoe and Thomas were pretty much enemies at one point. Thomas became a full-blown monster during all the B&B baby swap drama. He was constantly glaring, barking orders and hurling threats.

Zoe has seen Thomas at his worst, so Carter may not understand why she’d risk her heart with a guy like him. There are plenty of fish in the sea, so why choose a dangerous piranha like Thomas?

Zoe will get the feeling that Carter truly finds her attractive, so she should be grateful that he told her so. Every gal likes a sweet compliment now and then!

Nevertheless, Zoe will likely tout the benefits of second chances. She may point out that she was involved in the baby switch cover-up as well, so she’s not in any position to judge Thomas.

Zoe will want to put the past behind her and focus on the future – the future Thomas claims he wants with her.

As for Carter, The Bold and the Beautiful spoilers say he’ll remain wary of Thomas and his motives. Carter just won’t be convinced this is more than manipulation.

Carter will realize this could all be one big ploy to win over Hope Logan (Annika Noelle). Carter will worry that Thomas is going to break Zoe’s heart, so he should warn Zoe be careful.

Since Thomas is indeed manipulating Zoe and setting her up for heartbreak, will Carter pick up the pieces? Would you like to see Carter and Zoe find true love? We’ll give you updates as other B&B news comes in. Stay tuned to the CBS soap and don’t forget to check CDL often for the latest Bold and the Beautiful spoilers, updates and news.