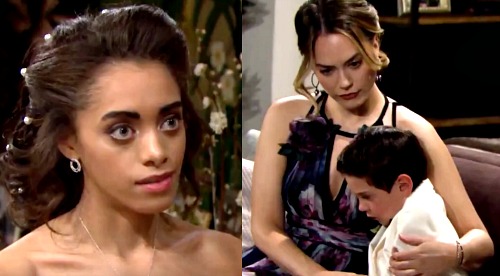 The Bold and the Beautiful (B&B) spoilers tease that Zoe Buckingham (Kiara Barnes) will find herself in serious denial. As her wedding to Thomas Forrester (Matthew Atkinson) draws near, Zoe will focus on what she believes she’ll gain from all this. She believes Thomas will be a good husband, so she’s ready to take this massive leap with him.

Unfortunately, Zoe can’t accept that Thomas is just using her to get to Hope Logan (Annika Noelle). She’s buying Thomas’ act about moving on and building a new family for his son.

Douglas Forrester (Henry Joseph Samiri) will remain glum as the ceremony approaches, but Zoe probably won’t worry too much. She’ll think everything will be fine once Douglas gets used to her being Thomas’ wife.

However, Steffy Forrester (Jacqueline MacInnes Wood) and Brooke Forrester (Katherine Kelly Lang) will make a last-ditch effort to talk some sense into Zoe. The Bold and the Beautiful spoilers say they’ll pull Zoe aside and make some passionate pleas.

Brooke and Steffy will urge Zoe to see that Thomas hasn’t changed a bit; he’s perhaps more obsessed with Hope Logan (Annika Noelle) that he’s ever been.

Despite Steffy and Brooke’s hard work, B&B fans can expect Zoe to stand her ground. She’ll remain devoted to Thomas and will fiercely defend him. Zoe will make it clear that she intends to marry Thomas today, but Steffy should know that’s not going to happen. Steffy will be in on Hope and Liam Spencer’s (Scott Clifton) plot to take Thomas down at this gathering.

Nevertheless, the wedding will move forward, which will give Douglas a chance to throw a fit. B&B spoilers, news and updates say Douglas will completely lose it in front of Thomas, Zoe, Hope and everyone else.

This should strengthen Hope’s resolve to do what’s right for Douglas – and that’s protecting him from his dad’s manipulation, not giving a crazy stalker what he wants.

Even Thomas may have second thoughts about his plan thanks to Douglas’ tantrum. He might believe calling this off is for the best. Then again, that may just be the excuse Thomas uses since it’ll look like he’s failed to win Hope.

As for Zoe, she’ll be so caught up in locking Thomas down that she’ll ignore Douglas’ pain. The Bold and the Beautiful spoilers say Zoe will push Thomas to continue his vows. She’ll think they should dismiss the kid’s interruption and just keep going, but Hope will have other plans!

Some fantastic drama’s cooking up on the CBS soap. B&B viewers will be eager to see all the action. Don’t forget to check back here at CDL for other Bold and the Beautiful spoilers, updates and news.