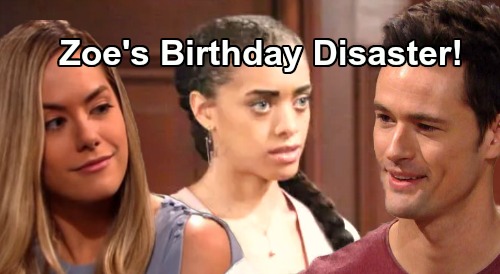 The Bold and the Beautiful (B&B) spoilers tease that Thomas Forrester (Matthew Atkinson) will step up his efforts to make everyone believe he’s devoted to Zoe Buckingham (Kiara Barnes). It turns out Zoe’s birthday is coming up, so Thomas will think this is a chance to lay it on thick.

There’s no better time to dote on someone than his or her birthday! Thomas will decide to do some party planning. He’ll think a big surprise bash for Zoe sounds like the perfect way to show he’s all in.

Of course, Thomas will want Hope Logan (Annika Noelle) on hand to witness his grand gesture. He’ll want to show Hope that his efforts are directed at Zoe now.

Thomas will do his best to play to cool when it comes to his attraction to Hope. He’ll want Hope to think he’s truly moved past his fixation and is just a normal guy who’s celebrating his new girl’s B-day.

There’s a good chance Thomas’ plan will work – at least initially. B&B fans can expect this to become quite the family affair since Thomas will include many of the Forresters in his plans.

Th Bold and the Beautiful spoilers say Thomas will hold this surprise birthday party at Forrester Creations. That shouldn’t come as a huge shocker to viewers. After all, Thomas has been planning romantic setups there – and an office is about the least romantic place possible.

It’s clear that B&B doesn’t want to add a bunch of sets, so they just use what they have – even when it’s odd.

In this case though, perhaps Thomas can throw the party during work hours to truly catch Zoe off guard. Regardless, Zoe should be touched that Thomas would think of her. She’ll be feeling the love, but for how long?

Since Hope should also be on hand, Thomas may struggle to stay away from her. Zoe could easily catch Thomas gazing at the blonde beauty and starting to worry that the doubters are right.

Parties tend to come with some drama on soaps, so it’ll be interesting to see how this one pans out! The Bold and the Beautiful spoilers say the excitement’s about to rev up. We’ll give you updates as other B&B news comes in. Stay tuned to the CBS soap and don’t forget to check CDL often for the latest Bold and the Beautiful spoilers, updates and news.