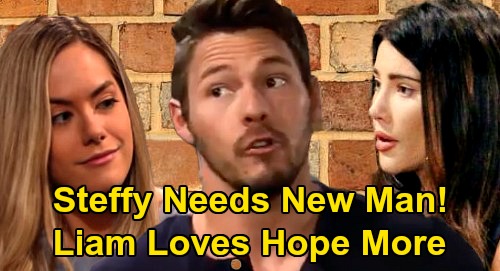 The Bold and the Beautiful (B&B) spoilers tease that Liam Spencer (Scott Clifton) will soon make a heartfelt confession to Hope Logan (Annika Noelle). He’ll declare his undying love and make it clear that his heart will always belong to Hope.

Of course, Hope may struggle to believe that since Liam drifts back in Steffy’s direction so often. She broke up with Liam because she felt like Steffy would forever come between them.

Whether Hope is truly the one who’ll always own Liam’s heart or he splits that heart with Steffy, the point is Steffy will never have all of it. Many B&B fans think it’s unfair for the show to keep pairing Steffy up with Liam.

It’s kind of appalling to let Steffy accept that she’s a second choice. Shouldn’t she be first in the heart of the man she loves?

Liam is clearly never going to shake Hope, and there’s already been so much damage done to “Steam.” If this Liam and Steffy reunion doesn’t pan out, what will The Bold and the Beautiful do? They can’t just let Steffy stay single forever – not when she’s expressed her desire to get back in the dating game.

B&B’s teased fans a bit with the prospect of Steffy dating again and finding someone new to love. It’s time to finally follow through on that. It’s kind of strange that The Bold and the Beautiful went all in on Flo Fulton (Katrina Bowden) as a new character.

They’ve given Flo plenty of airtime since her debut and even added Shauna Fulton (Denise Richards) to the mix as her mom.

If B&B can work so hard to make Flo and Shauna relevant, why can’t they add another hunk to the mix? What’s stopping them from bringing a new man on the show for Steffy? They’re going to need one if Liam chooses Hope again since there aren’t a ton of single male options on canvas.

Steffy must have a perfect perfect match out there somewhere! The Bold and the Beautiful spoilers, news and updates say Steffy has some interesting things in the works, so we can always hold out hope for a new love story.

Steffy deserves it if we’re getting “Lope” all over again. She could stand a fresh start away from the reunited lovebirds!

Do you think B&B will ever add a new man for Steffy? Doesn’t Steffy need one since Liam can’t commit to her? We’ll keep you up to speed on all the latest updates and news. CDL will have plenty of exciting Bold and the Beautiful spoilers for you to catch up on.