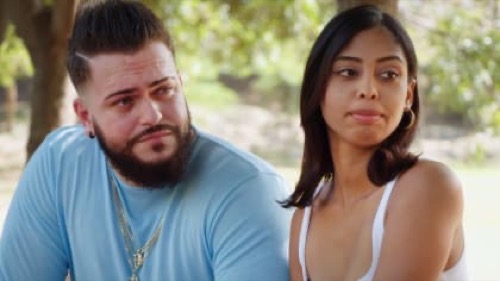 Tonight on TLC their reality show The Family Chantel airs with an all-new Monday, November 30, 2020, episode and have your The Family Chantel recap below.  On tonight’s The Family Chantel season 2 episode 8 called “Crazy Stupid Love,” as per the TLC synopsis, “Chantel uncovers new information that fuels her suspicions, but her attempt to get clarity from Angenette doesn’t go as planned. In the Dominican Republic, Nicole and Alejandro try to put their fight behind them and resolve to tell Lidia the whole truth.”

Uncle Ronson cleared a few things up. He claimed that it hadn’t been Angenette’s mother that was reaching out to him and so Angenette’s family hasn’t done anything wrong. All they’ve done is try to speak up for Angenette. They defended her against her own husband’s lies. Angenette’s family has told Royal that Angenette never cheated on him and that her baby that she miscarried was his. He shouldn’t even be questioning it. He was married to Angenette and the couple has been together for years. If he couldn’t trust her now, then he was never going to trust her and that’s what it looks like because of his actions. Royal followed Angenette to a club when he knew she was hanging out with his sisters and he basically demanded that she leave with him. She wasn’t allowed to have fun if it was without him.

Royal could be a jerk sometimes. He lies to and about Angenette. He tells his family that she was speaking to other American men around the time they first got together. Angenette denies this. She told Chantel that she hadn’t been speaking with other men nor was she sleeping with other men. Angenette has no idea why Royal mistrusts her so much. He goes and tells people behind his wife’s back that Angenette couldn’t be trusted. He says her baby wasn’t his. He says Angenette was lying when they first got together because he claims she was shopping for an American and this yet another thing that Agenette denies. Angenette and Royal disagree about a lot of things. She told him that he wasn’t being fair to his own family with the way he trashes them when they’re not around.

He apparently calls his own sister “stupid”. Chantel helps him whenever she can and he has the nerve to call her stupid. Well, Chantel proved she wasn’t stupid when she did a background search on the woman who contacted her Uncle Roston. Chantel looked up this woman and it led to a profile for someone named Luna. Luna is Angenette’s mother’s name. It’s also pretty clear that Angenette’s mom has been trying to contact Royal’s family in the United States and so this made Chantel mistrusts Angenette as well. Her brother may not be a saint but Angenette didn’t seem perfect either. Chantel has been wary of her sister-in-law for a while now. She’s listened to everything that Royal has ever said about his wife and she’s running with it.

Chantel believes someone from Angenette’s family if not Angenette herself has tried to extort money from the uncle. Uncle Roston claims that the woman who contacted him had demanded help in getting a green card. She also wanted money and so Chantel told her parents about it. She showed them the evidence she collected She told them how the profile led back to a woman named Luna. It wasn’t always Luna. It was first under another name and that name changed after the family heard back from their uncle. Which is again suspicious. The person changed their name after they had been found out and it just happened to have the same name as Angenette’s mom. It had to be her mother. It was either the mother or someone else in the family.

Now, Chantel’s parents think Angenette is shady. They suspect her family of being gold-diggers and the only one that’s happy is Pedro. Pedro was accused of wanting money. His family was once called gold-diggers as well and still, his family never did make demands like Angenette’s family was doing. Pedro didn’t send money back home until he was working for it. Pedro’s family also didn’t like Chantel’s family and they’ve never hidden that fact. They’ve been pretty horrible at allegedly squeezing Chantel’s family for money. His mother Lydia and his sister Nicole have almost caused Pedro and Chantel to divorce on numerous occasions. His sister Nicole seemed to personally enjoy attacking Chantel and the two women hated each other. Chantel, therefore, found it amusing when she found out what Nicole was up to.

Nicole was seeing a married man. He wasn’t just married either. He was Dominican and so he couldn’t give Nicole the green card she wants. Only Nicole didn’t care. She loved Alejandro and she didn’t want to give him up. She didn’t give him up once her brother found out about the situation. Pedro met Alejandro without Nicole there and Nicole hadn’t been able to run interference. Nicole also hadn’t been able to stop Alejandro from revealing the truth about the marital situation. Alejandro told Pedro he was married. He said the marriage was over and no one really believed him. Pedro didn’t believe him because his own father was married. His father lied to Lydia. He lied to her for years before he finally came clean and so married men were lower than dirt to Lydia. She detests them.

She also hated Alejandro on sight. She hated him before she even got the chance to get to know him and she threw him out of her house before she got the chance to know him. Both Lydia and her son had hated Alejandro right away. They thought he was arrogant and again it didn’t help that he was Dominican. Lydia doesn’t want a Dominican man for her daughter. She thought Dominican men were scum and so Nicole had at first hidden her relationship. She has hidden certain details. She’s only coming clean now. She wants her mother to like Alejandro and so she decided to be honest for once. Nicole told her mother that Alejandro was married. She was expecting the worst for her mother and that’s what she got. Her mother blew up when she found out Alejandro is still married.

And back in the Philippines, Chantel confronted Angenette about her mother. Angenette had earlier claim that “Antoinette Alonday” had nothing to do with her mother and it was strange tonight when she confirmed that “yes” that name is her mother. Angenette claimed someone was using her mother’s other name to contact this uncle. She says it wasn’t her mom and so Chantel had had enough of her. Chantel told Angenette that she hasn’t been good for Royal. She also suggested that Angenette stay in her own county rather than go back to the States with them and so Angenette stormed off crying. Chantel ended up feeling bad for what she said. She told her mother about it and her mother thought it was time to bring it up to Royal, but Royal didn’t care what happened. He thought his family was starting to mess and so he told them not to ruin his wedding.