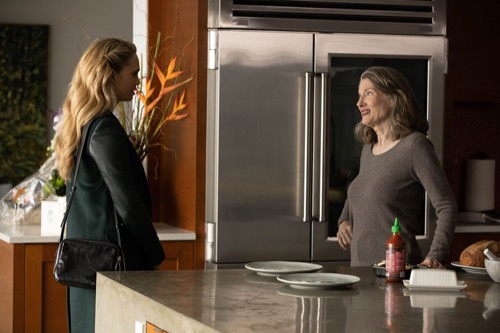 Tonight on NBC their new medical drama “The Good Doctor” airs with an all-new Monday, January 27, 2020, episode and we have your The Good Doctor recap below. On tonight’s The Good Doctor season 3 episode 13 called, “Sex and Death” as per the ABC synopsis, “Dr. Shaun Murphy and Dr. Morgan Reznik grapple with a terminal cancer patient who is determined to live the last few months of his life without inhibition.

Meanwhile, Dr. Reznik must confront her relationship with her mother when she comes in for a third opinion from Dr. Glassman; and Shaun and Carly’s relationship reaches a new level of intimacy.”

Shaun is walking down the hall with Morgan and tells her that he thinks about sex all the time, but mostly with having it with Carly because they are compatible. Morgan tells him that maybe he shouldn’t talk about sex away from Carly. They go into to see a cancer patient, Oliver and tell him that they want to put in a permanent port to help him with the chemo, so they don’t have to look for a vain ever time. The patient asks if they can do anything for nausea, they don’t answer, the patient says that he doesn’t need the port, he doesn’t mind getting poked with a needle, in fact, he doesn’t need any more chemo.

Aaron is speaking to Caroline, tells her the treatment is a lumpectomy. It will likely lead to curtailing her ability to be creative but all her other abilities will be intact. He goes on to say that he had a prognosis of his own lately, surgery, chemo, radiation, the works. His greatest fear was survival as something lesser. Then he had a revelation of sorts, he is not defined by his skill as a surgeon. He doesn’t do this anymore, he just saw her as a courtesy. She could have another 25 or 30 years with her family, a balanced life is not necessarily a lesser life. She says she disagrees and walks out.

Morgan bets Claire that Shaun is going to mention sex in front of a patient in the next 24 hours, Claire won’t take the bet and tells Morgan, he is just excited.

Caroline bumps into Morgan in the hallway, ask her where she can get lunch. Morgan introduces Caroline as her mother; then Caroling has a seizure and passes out.

Shaun tries to convince Carly to go home and have sex for lunch, she tells him that it is not enough time and they need to improve on that.

In the operating room, Caroline is bleeding from the brain. Morgan is watching from above, she is very nervous.

Shaun is walking for the hallway with Claire and Alex, he tells them that he failed Carly twice. Claire asks if he is talking about Sex and Shaun says that HR would prefer that he not use that word. Shaun says that there was no parade for him, but not for Carly, he will continue reading. Alex suggests that he speak to Carly and see what she likes. They go in to see Caroline, Morgan is there and she is very negative, asks them if they are there to tell her mother she is going to die. Claire tells Caroline that her daughter is right. Caroline changes the subject by giving Claire the flowers on her night table.

Later, Morgan tells Claire she is trying to get some of the cases taken care of because of her mother’s illness.

Neil and Shaun go in to see Oliver, he hurt his foot skydiving. He jokes around with Shaun about going to Costa Rica, his wife says it doesn’t bring happiness. Oliver says she can’t tell a dying man what to do. Meanwhile, Morgan finds out that her mother checked herself out of the hospital.

Shaun buys Carly a coffee, tells her it to celebrate last night’s breakthrough, she had a parade last night. She tells him the reason for the parade, was that he had his elbow in her hair, and parades are not always required.

Caroline is home, Morgan drops by. Morgan wants to talk about the fact that she is dying, Caroline doesn’t want to. Her brother walks in, he admits not including her in conversations about her mother because she never wanted to be a part of the family. All of a sudden, there is blood on Caroline and she looks dazed. They bring her to the hospital, she cut part of her finger off with an electric knife. In surgery, they try to reattach Caroline’s finger. Shaun talks to Alex about Caroline’s condition, he has an idea to stop the seizure.

Shaun shows up to Carly’s house dressed in a kilt.

Caroline is waking up from surgery, Alex tells her that the equipment will tell them why she had the seizure. Morgan is with her mother, reading symptoms from her diagnosis. Her mother doesn’t want to hear it, Morgan says they could discuss what a lousy mother she is.

Oliver is back in the hospital, he was driving in his new Ferrari. His wife is upset, he is emptying his retirement fund. Shaun says they will keep him for observation and do some tests. He asks for how long because he is moving to Costa Rica. His wife says she is not going and quitting her job. Oliver tells her that he wants to see Costa Rica, and he wants her to go with him, he is going either way. She tells him to go, she says she doesn’t want to spend whatever time is left with whoever he is now. He says he is happy, she says she thought she made him happy.

Morgan is still talking about her other and all the horrible things she said to her in her lifetime. Her mother says that she still loves her, it didn’t matter that she wasn’t creative. Morgan just keeps going and going, pushing her mother until she shouts, and then has a seizure. Alex walks in and witnesses the seizure.

Caroline is fine, she wants to be discharged. Morgan tells her she needs to be watched for a day, then they can say goodbye.

Shaun tells Morgan that if he had only six months to live he would still be a surgeon. Morgan says she would move from spa to spa, having drinks with little umbrellas in them, then she would throw a party in the penthouse of the Four Seasons. And after everyone left, she would painlessly self-euthanize. Shaun says she is so much like her mother, Claire says it as well, she would rein like a queen over her own death, keeping it in her hands and having complete control. Morgan is reading something, she gets up and walks away.

Morgan goes to see Aaron, she read about a procedure that might be possible on her mother. Aaron says if they make a mistake it can worsen the condition. Aaron says he can’t do it and gives Morgan back the file. She asks him if he is afraid to pick up a scalpel. Aaron tells her to get out.

Aaron goes to see Caroline and tells her about the procedure that Morgan is suggesting. The next day, Caroline asks Morgan how Aaron came up with the idea, she says it was her idea – it is the last chance she will have to continue being an artist. Caroline thanks her for trying, but says she won’t do it. Later, Alex sits down with Morgan and tries to calm her.

Oliver has shingles, Alex asks if they should call his wife. He says no, he just wants to be fixed up and released into the wild. Oliver says his wife was right, he is not the same person. He asks Shaun what makes him happy, Shaun was about to say giving Carly a parade until Alex interrupts him, then Shaun says the happiness of small things in life. Shaun tells Oliver that his happiness is too loud. Shaun tells Oliver they need to do more tests.

Morgan meets her brother in the hallway and says she knows they want the same things. She brings him into a room and shows him a video of what the procedure would be on their mom. He tells her to show it to mom, Morgan says from him, she will accept it.

Caroline goes through with the surgery, Morgan is watching on, Aaron is doing the surgery.

Oliver is told that his cancer is almost gone, his recent infection got into the tumor. Oliver is surprised, he was told it was aggressive cancer. Shaun says the tumor has become small enough to be removed.

Caroline is up and walking about, she is tired of being in the hospital. Caroline and Morgan makeup, she thanks her for saving her life, they hug, her brother is there and smiling.

Claire is in the lunchroom with Shaun and says maybe everyone doesn’t get a parade. Audrey is there and tells Shaun to not stop the parade until the band starts playing, and go three percent longer. Shaun says he will. We see Claire and Shaun in bed, it looks like she got her parade.