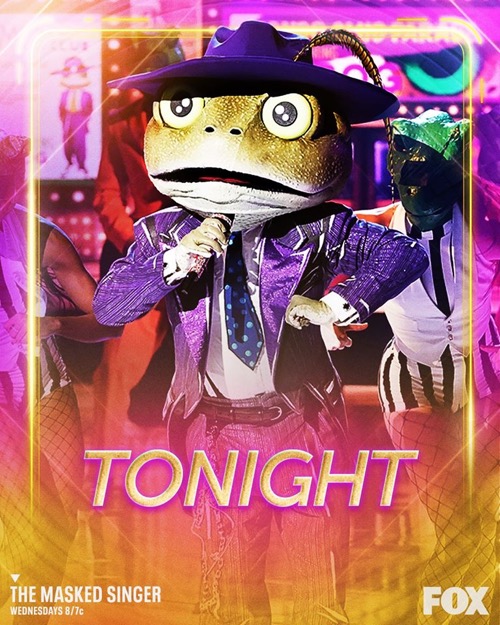 Tonight on FOX The Masked Singer airs with an all-new Wednesday, February 26, 2019, Season 3 Episode 5 and we have your The Masked Singer recap below. On tonight’s The Masked Singer season, 3 episodes 5 called “Mask-Matics: Group B Playoffs,” as per the FOX synopsis, “The singers in GROUP B return to the stage for their “playoff” performances, as comedian and actor Gabriel Iglesias joins the panelists at the desk.

Host Nick Cannon and panelists Ken Jeong, Jenny McCarthy, Nicole Scherzinger, and Robin Thicke dive into the clues and make their guesses for the celebrity singers performing under their masks.”

Tonight’s Masked Singer has five contestants left in group B. The host is, of course, Nick Cannon. The judges are as always Robin, Jenny, Ken and Nicole with a special guest judge Gabriel Inglesias (Fluffy).

Banana is up first. The clues are that he uses the phrase “Git Ur Done,” as a silver bunny and cowboy boots in the package. His fav subject in school was art. He sings, “Achy Breaky Heart” by Billy Ray Cyrus. Ken thinks he is Larry the Cable Guy, Nicole is sticking with Ed Helm, Gabriel chooses Billy Bob Thorton. My Guess: Bill Engvall.

Next up is the Mouse. Her clue package has a lot of gold throughout (as in Solid Gold Host?). She says the stage is like her second home. She has she still has more stories to tell. She likes romance novels. She says they ain’t no stopping her now. Mouse sings “This Will be” (an everlasting love) by Natalie Cole. Mouse says her fav subject in school was Math. (Jenny says there can’t be two legends on this season.) Jenny is wrong and I’ll tell you why because that Mouse is Dionne Warwick. Ken thinks it is Tina Turner. Nicole agrees with Robin, that it is Dionne Warwick.

Next up is the Frog. Frogs clues include C S I highlighted on the typewriter. Basketball and toy soldiers are featured as well as a tag with $19 on it. Frog says his fav subject in high school was the gym, because it kept him in shape. Frog sings “In Da Club”. By 50 cent. My guess after the CSI clue is Bow Wow who was on CSI Cyber. Jenny thinks it is Alfonso Ribeiro, Gabriel agrees. Ken thinks it is Kevin Hart.

Taco is next. Tacos clues he says we think of him as a buttoned-up type but he used to be a hothead. He shows wigs. Taco sings “Bossa Nova Baby” by Elvis Presley. (I want the hot sauce mic.) Taco says he was the class clown in school and got stuck in the closet one time and loved it because he didn’t have to be in class. My guess is Tom Bergeron. Nicole is confused, last week she thought it was Harry Connick Jr. Gabriel thinks it is Tom Danson. Ken thinks it is Alec Baldwin.

Last up is Kitty. Kitty’s clues. She says she loves to sew. Uses the phrase Modern Family. She talks about transformation. Little Red Riding Hood clues. Kitty sings “Mercy” by Brett Young. Kitty says her fav subject in school was English and she says she is a bookworm. My guess is no freaking idea guys. Maybe someone from Nick … Miranda Cosgrove… Victoria Justice. Jenny thinks it is Millie Bobby Brown. Gabriel is thiking Amanda Seyfried. Ken thinks it is Sarah Hyland.

The singer with the least amount of votes and not advancing is the Mouse. The Mouse is………Dionne Warwick. Everyone guessed it except for Ken, he was going with Tina Turner.