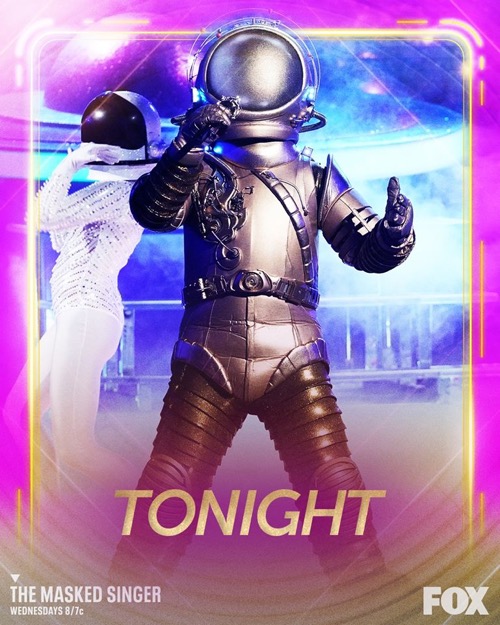 Tonight on FOX The Masked Singer airs with an all-new Wednesday, March 25, 2020, Season 3 Episode 9 and we have your The Masked Singer recap below. On tonight’s The Masked Singer season, 3 episodes 9 called “Old Friends, New Clues: Groups C Championships,” as per the FOX synopsis, “Will Arnett Joins the Panel Group C members make their final outing on THE MASKED SINGER stage, as only three will move on to the Super Nine.

Will Arnett, host of FOX’s LEGO MASTERS, joins Nick Cannon and panelists Ken Jeong, Jenny McCarthy, Nicole Scherzinger and Robin Thicke as they dive into the clues and make their guesses for the celebrity singers performing under their masks.”

The usual suspects are gathered tonight Robin, Jenny, Ken, Nicole, and a special guest Will Arnett. Nick is doing the hosting duties.

The show kicks off with a performance by Astronaut, Rhino, T-Rex and Night Angel. They sing “Lets Get Loud” by Jennifer Lopez. The girls definitely stand out and as usual T-Rex is bouncing everywhere.

Night Angel is up first tonight. She has been doing this since she was a teen, but she’s never felt so free as she does under her mask. A friend from high school who is hidden behind a disco ball is giving this week’s clues. He says she always juggled school with chasing her dream and she ended up missing out on a lot even her Prom. There is an Astronomy class report card. He says she made sure not to miss her graduation. Night Angel sings “Shout!” by the Isley Brothers. Night Angel gets emotional she says she still struggles with her confidence when she sings. She also gives up a clue made of legos “Good Times” then she says Jenny mentions her name often on her show. Jenny guesses Toni Braxton. Nicole picks Taraji P. Henson. Will picks Janet Jackson and then Mayim Bialik. My guess is Kandi Burruss.

The astronaut is next he says when he started this journey he never knew how “at home” he would feel in his spacesuit. He says he is “only human. His “bro-pilot” is the clue giver this weeks and says Astronaut knows how to lead a crew. (We see a coffee mug and some dice all on the 5). His “bro-pilot” says that Astronaut can be a total space cadet and one time he even fell on his face in front of thousands of people. He says somebody else would have said “Bye Bye Bye” and called it quits, but Astro got right back up. (bridge). Astronaut sings “Shape of You” by Ed Sheeran. He says if he makes it to the Super nine he will reveal his whole heart. Astronaut’s clue is “mall,” he says he and Nicole were together once to celebrate a birthday. Ken picks Eddie Vedder. Robin gives that guess a Hell No. Will guesses JC Chasez. Robin guesses Joseph Gordon-Levitt. My guess Hunter Hayes, or Lance Bass.

T-Rex is up. She says she has been working her tail off in this competition is excited to be this close to the Super 9. Her coach who is (flying in a private jet with a face covered in a food tray) says they’ve worked together and traveled side by side often. The coach says T-Rex “subscribes” to the idea that there is no off day. The coach says she is meticulous and young (lips in a glass, boomerang lying around). T-Rex sings “Jai Ho! (You Are My Destiny)” by A.R Rahman and The Pussycat Dolls. T-Rex’s clue is “poodle,” she says she that Will is the LEGO. Because LEGO Batman is how they are connected. Will guesses Gabby Douglas. Jenny guesses Jojo Siwa. Ken guesses Honey Boo Boo. My guess is also Jojo Siwa.

Rhino is the last one tonight. Rhino says he has struggled with criticism and that being on the Masked Singer and receiving so much praise is beyond humbling. His college roommate is the clue giver this week and reveals they tried surfing and they were terrible…but Rhino stuck with it and became a beast at it.. (Three quarters next to an arrow pointing upward). He says when Rhino wants to accomplish something he will outwork anyone. He says Rhino is a total softy. (“Missouri” is highlighted on a map). Rhino sings “Tracks of My Tears” by Smokey Robinson. Rhino’s clue is the number “1,000”. Rhino says he and Robin are on the same track….literally. Robin guesses Will Ferrell. Ken guesses David Hasselhoff. Will guesses himself. My guess is Tim Tebow or Barry Zito

The one going home tonight is the T-Rex. You can tell she is heartbroken she got voted off. The panels final guesses are…Robin, Jenny, and Nicole all guess Jojo Siwa. Ken guesses Liza Koshy. Will guesses Tara Lipinski. My guess is also Jojo Siwa. T-Rex takes her mask off and she is ……Jojo Siwa.