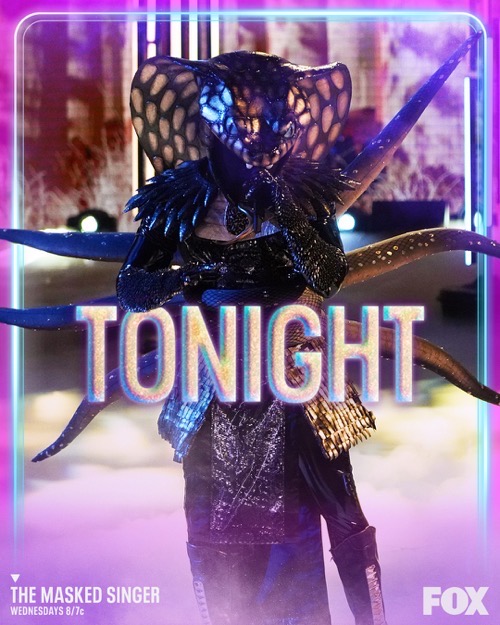 Tonight on FOX The Masked Singer airs with an all-new Wednesday, October 14, 2020, Season 4 Episode 4 and we have your The Masked Singer recap below. On tonight’s The Masked Singer season, 4 episodes 4 called “The Group B Play offs – Cloudy With A Chance Of Clues,” as per the FOX synopsis, “The celebrity contestants return for the GROUP B playoffs and their second performances of the season.”

It’s time for the Group B playoffs. Nick Cannon takes the stage. He says hello to the panel. Only 4 will make it to the finals. Joel McHale returns as a guest star. Getting right into it, the Serpent takes the stage to sing. Before he begins, he shares some clues about a challenging journey during which he couldn’t pay rent. But after continuing to fight, he has finally made his dreams come true. After a childhood clue about racing and milk, Nicole thinks of Brian McKnight. Joel thinks Jessie Williams from Grey’s Anatomy while Robin thinks Tase Diggs.

The Crocodile is up. He shares some clues about realizing how he has missed performing. After he made it big when he was a kid, he gave his first paycheck to his dad who cried. He sings Britney Spears Toxic. The panel goes crazy. They all love his diversity. A childhood clue is brought out. A piñata that has baby whales in it. Ken is stumped. Nicole thinks maybe Adam Lambert. Robin agrees. Ken thinks Lenny Kravitz. Joel thinks it is Harry Connick Jr.

It’s the Baby Alien’s turn. He drops a few clues about sharks coming after his money when he was younger. He also drops a Baywatch clue. Joel is completely confused. The Baby Alien gets the panel to stand and dance. Joel laughs at the baby in his crib. Ken tells him it is a galactic crib. Nick brings out a clue. Joel thinks it could be Eric Bana. Nicole thinks possibly Jeff Dunham. Kelly thinks Taylor Lautner.

Whatchamacallit is next. He drops some clues before performing, sharing that he is a bit of a momma’s boy. It also sounds as if his mom may have health issues but she wants him to continue on his journey. He raps, bringing the audience to their feet. After his performance, Ken tells him how great he is. They bring out the childhood clue. The clue shares that he is an open book. The pressure is put on Ken. Robin thinks he is an athlete, possibly Cam Newton. Ken has an idea, maybe it’s Armie Hammer. He continues to drown on about why he thinks this when they all tell him to be quiet.

The final singer is up. It is the Seahorse. She shares that she tried her best to be a hero before but failed. She sings a Celine Dion song. Nick is impressed. One of the best vocals he has ever heard. Robin thinks it was an outstanding performance. A clue is brought out but it confuses the panel more. Robin thinks BB Rexa. Joel thinks Jessica Simpson.

It is time to reveal the singer with the least amount of votes. Baby Alien is out. He comes to the stage. The panel shares their initial guesses. Ken thought Freddie Prinze Jr. Robin has changed his guess and thinks Jason Biggs. Nicole dumps her first guess and thinks it might be Jeff Dunham. Joel still thinks Eric Bana. It is time for the big reveal…it is Mark Sanchez, an NFL QB.