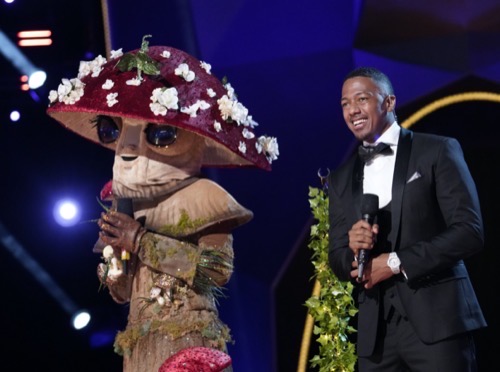 Tonight on FOX The Masked Singer airs with an all-new Wednesday, November 26, 2020, Season 4 Episode 10 and we have your The Masked Singer recap below. On tonight’s The Masked Singer season, 4 episodes 10 called “The Group C Finals – The Mask Gives Thanks,” as per the FOX synopsis, “Get an extra helping of America’s favorite guessing game, when the final three singers from “Group C” compete for the final two spots in the “Super Six.”

Tonight it’s the group C finals, three singers remain but only two will advance to next week. Our competitors are jellyfish, broccoli, and mushroom. Ken Jung is missing from the panel tonight, oh, he comes in from behind and has a turkey hat on his head. Our guest panelist this week is Jay Pharoah, comedian extraordinaire. Jay is thrilled to be back, and he has brought a few voices with him.

The group C finalists come out and sing, “I Want You Back,” by the Jackson Five.

Panels comments: Jenny: “I am so thankful, you guys did an amazing job, I am so excited to see what you guys do tonight, and we are rooting for all of you to make it to the super six even though that is not possible, but we are rooting for you.” Ken: “This is by far the healthiest ensemble number I have ever seen in the series (he calls his Turkey hat, Barry The Turkey).”

The jellyfish is first to perform solo, and she is giving some new clues, “when I stepped out on stage I was so nervous but now I have found my sea legs, this feels like a dream.” Her sister likes to crunch numbers and says jellyfish is the overachiever and already ticked off many accomplishments already, they love singing together over their favorite show. Jellyfish sings, “Don’t Start Now,” by Dua Lipa.

Panel comments: Ken: “You really have come so far after three performances, you are a real chance to compete with sun, popcorn, sea horse in the super six, I really do.”

Jellyfish brings out a turkey with a message in a bottle, “if you find this you will know that I have never performed on a stage quite like this before.”

Most of the judges believe the jellyfish is Kylie Jenner.

More clues about the mushroom, she has had a blast throwing the panel off her scent and she is happy to be on stage again. Only one person knows she is there and he is a real government agent. Whether it is helping underprivileged youth or helping important causes, her work effort is unrivaled. Mushroom is singing, “Unconditionally,” by Katy Perry.

Panel comments: Nicole: “This one is frustrating me the most, every performance that mushroom does is transcending, I don’t know who you are yet but you possess a power under that costume.” Jenny: “Based on your talent I have no doubt you are going to the super six.”

Robyn thinks it is Jaden Smith, Nicole thinks Taye Diggs, Ken is going for The Weekend.

Broccoli’s turn, he is so grateful to have so many fans during the years, but two special ladies have given him the most attention. As a kid, he used to sneak into the circus and dream that he was going to be a performer. He approaches everything with unparalleled perfection and pizzazz. Broccoli is singing, “Old Time Rock & Roll,” by Bob Segar

Panel comments: Nicole: “You rocked out and dropped it like it was hot, you killed it.”

Men in black bring out the turkey, it is a recipe card, “do not put your broccoli in the microwave, which was invented after I was born.”

Time for the audience, panel, and America to vote. The singer going straight to the super six is jellyfish.

Time for the SmackDown between broccoli and mushroom, broccoli is singing, “Take Me Down,” by Alabama. Mushroom is singing, “A Song For You,” by Donny Hathaway.

Panel comments: Jay: “The broccoli you did your thing you were killing it, mushroom you had a little truffle butter in there.” Nicole: “I thought it was unbelievable, just to watch it visibly, was like veggie on veggie crime.”

It is time for the panel to vote who won that Smack Down. The votes have been tallied and the singer going home is broccoli. Nick brings out the first impression guesses. Nicole: Bill Murray, but she changes her mind, Wayne Newton. Ken: Martin Short, but now he thinks Ringo Star. Robin: Bob Newhart, now he changes it to Paul Anka, Jenny: Gerry Springer, now she changes her mind to Paul Sedaka. Jay thinks it is Paul Simon.