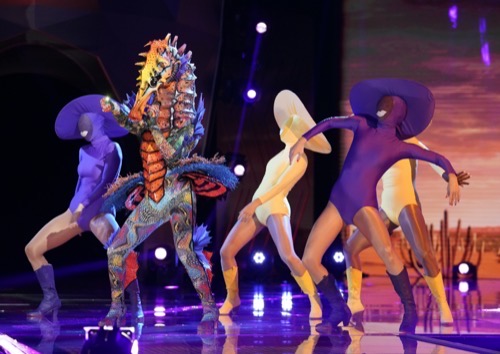 Tonight on FOX The Masked Singer airs with an all-new Wednesday, December 2, 2020, Season 4 Episode 11 and we have your The Masked Singer recap below. On tonight’s The Masked Singer season, 4 episodes 11 called “The Semi-Finals; The Super Six,” as per the FOX synopsis, “Super Six” hit the stage as the finalists from all three groups come together for the semi-finals.”

It’s the Semifinals! The Super Six performed “Take On Me” to open the show and it was a great start to a phenomenal night. This also happens to be the last night they’ll all be together like this because there was going to be a triple unmasking at the end. Three people are going home tonight and that meant half of the talent was going to be eliminated. But not before they’ve all had a chance to perform. The night was rife with performances and there was even a performance from Craig Robinson as the masked pianist. He came out. He performed and his voice was so distinctive that many at-home correctly guessed it was him. And then there the reveal Craig was a part of because it turns out he came on the show to announce there was going to be “the Masked Dancer” coming out soon.

“The Masked Dancer” is very much like “The Masked Singer”. Celebrities wearing elaborate costumes get to come out and they get to perform in front of a panel of judges who will try to guess who they are behind the mask. This new show will kick off the moment “the Masked Singer” is over. So, the fun is just beginning. The rest of tonight’s performances were the Super Six and up first was the Seahorse. The Seahorse is a woman. She’s talked about being shy about performing when she was young and there were more clues in the safe. She was close to Nick. Nick has never had anyone he knows come out before and so he couldn’t figure this one out. He had no clue who the Seahorse was.

The judges all made their guesses. They were some that thought she was Tori Kelly, another who thought she was Kesha and another who thought she was Sia. Most of these guesses came about because of the clues. There was a telescope which most of them is stuck on and Nicole thought Tori Kelly because she mistakenly confused “American Idol” with “America’s Got Talent”. Seahorse was a great singer. She was a great performer which led the panel to believe that she did this for a living because they all enjoyed her performance. The Seahorse had the voice and the Crocodile had the heart. The Crocodile went next. He revealed that he loved performing in different genres than he was used to and that he drove home after every performance to be with his children.

It was an eight-hour drive and still, he drove home to see his kids because he didn’t have that growing up. The Crocodile performed Aerosmith’s “I Don’t Want to Miss a Thing”. It was his best performance to date and so many were interested in what was in the safe. It turns out the person he’s connected to is to Craig. Craig is one of the Crocodile’s most favorite actors. The two of them have also been on screen together and so Craig believed that the Crocodile might be a Backstreet Boy because he did a film with them once where they came on towards the end. There were also several other guesses like Nick Lachey and on and on and so there was no telling who he was. It was just clear that he was advancing. Unlike the Seahorse.

The Seahorse was the first person to be eliminated tonight. Her unmasking won’t happen until the very end and so there was still a wait to go before anyone finds out whose behind the mask. Until then, there were more performances and there was also some games as well. Ken Jeong won a spot on “the Masked Dancer”. He delivered some burns and he won himself a spot. This was yet another reason to watch the new show. The current show on the other hand still had a few surprises. The Mushroom was once again going up against the Jellyfish. The Jellyfish won the last time they went against each other and so the Mushroom was hoping history wouldn’t repeat itself. He performed first. He performed “Valerie” and he also talked about spreading a message of unity through music.

The Mushroom lost someone to Covid-19. He was to help people heal with his music and that plus his connection to Robin had Robin believing he was Jaden Smith. The others on the panel came up with the names Jordan Fisher, Leslie Odom Jr., and Keegan Michael Kay. They were mostly thinking of Broadway because of the voice. The Mushroom was musically talented and so many thought he sang professionally. It wasn’t like this with the Jellyfish. The Jellyfish started off as someone who was very nervous and she gained confidence and sounded better over time. She therefore didn’t sing professionally. Even if she now sounds great like she could do this professionally and she just never considered it before.

The panel didn’t think she was a professional either. Ken was the person the Jellyfish was connected to and she had tried to meet Ken and it just never worked out. Ken believed the Jellyfish to be Chloe Kim. She’s an Olympian. She was also a part of the X games and X was a clue. The others on the panel thought the Jellyfish was either Grimes who was French Canadian and who recently gave birth to a little boy with a name that begins with X. Another thought the Jellyfish could be Gabby Douglas because the Olympics are supposed to be in France soon and so the majority believe they were dealing with an athlete. And in a battle between the two, it was the Mushroom who pulled ahead and who won’t be unmasked tonight.

The final face-off of the night was between the Popcorn and the Sun. The Popcorn went first. She was a great singer which she showed off again tonight and so many got wrapped up in a performance that they forgot they were supposed to be paying attention to the clues. There were a bunch of clues with Popcorn. She said she’s been performing decades before most of them have been alive.

She also showed some eighties iconic items and then there was her costume. She was popcorn so people might have gone to the movies to see her. The popcorn was connected to Jenny. Jenny was confused about who she thought it was. She thought it could be either of two women and one of the options she chose had resonated with Craig who also said he thought the Popcorn could be Mary Wilson.

Another person suggested Bette Middler. She was a singer and an actor. She fit all of the clues and so who knows?! The Sun performed next. She chose a Billie Eilish song and her performance really did blow everyone away. She even got standing ovations. Jenny stood on her chair to give a true standing ovation. Craig and Nicole were in tears. Nicole was the person the Sun was connected and she had no idea who it was.

She was thinking of two people, but she’s met both people in the bathroom and so she really had no idea who it could be, and neither did anyone else. There was one guess that thought it could Emilia Clarke because the clue was that she was breathing fire and Emilia Clarke famously played the Mother of Dragons.

Both Nicole and Jenny received points toward the Golden Ear for their correct picks. Craig had correctly guessed it as well. He more caught on to what Jenny, where was going and so Jenny, was the one who was constantly changing his mind. Jenny did after all meet the Popcorn in person. The next unmasking however was a little more difficult.

The Jellyfish was either Gabby Douglas, McKayla Maroney, Grimes, Chloe Kim, or a second Chloe Kim guess. Craig chose to copy Ken this time and so that’s why there was a double Chloe Kim. Ken was the person she was connected to. He was the one that thought it was Chloe Kim and he had been right. He was a huge fan of Chloe Kim’s. She was a huge fan of his and she had DM him on Instagram.

He didn’t even read it. He left it undelivered for two years and that’s why he never knew the inspiration to his daughters was literally one message away. So, hopefully, he’ll make it up to Chloe Kim. She performed one last time before she left and it was clear she had fun while she was here. The final unmasking tonight meanwhile went to the Seahorse.