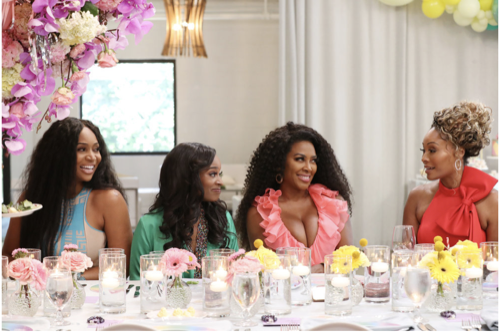 Tonight on Bravo The Real Housewives of Atlanta airs with an all-new Sunday, December 20, 2020, season 13 episode 3 called, “Ten Ten, Twenty Twenty,” and we have your The Real Housewives of Atlanta recap below. On tonight’s RHOA season 13 episode 2, as per the Bravo synopsis, “Porsha returns home from her second arrest in Kentucky and also reveals that she and Dennis have called it quits.

Kenya offers Cynthia marital advice and juggles her fast track friendship with LaToya. Drew and Ralph agree to go to marriage counseling, while Cynthia and Mike disagree over when to host their dream wedding.”

Latoya, Kenya’s friend drops by, Kenya tells her that she has a perfect butt. Then they sit down to have shots. Latoya talks about wigs, she says some look like you have dead animal on your head. Kenya asks Latoya what issue she has with Drew, did she get offended when she called her out about wanting to date.

Kandi and working with her trainers Richard and Dionna. Kenya shows up, she joins the work out, along with Cynthia. After a solid work out they take a fruit break. They talk about the wedding, Cynthia says everything will work out ok as long as Mike agrees with her. They start talking about prenups and Kenya says it is easy, what is mine is mine and what is yours is yours.

Porsha is with her sister, Lauren, they go to Tanya’s and get to see Adeline who is ten months old. Porsha says quarantine started like honeymoon and then it feels like divorce. She is referring to her spit from Dennis McKinley. They had this major argument and it sent Porsha over the edge, she needed to breakup for her. She doesn’t want to stop and deal with it, she is so broken and so weak.

Porsha, Lauren and Tanya arrive at Falynn’s house, another friend of Porsha. They meet her husband, Simon and thank him for having them. Falynn brings two waps to the table, they light them. The girls push each other into the pool, they notice a hot tub and they all get inside and toast to 2021. Falynn asks Porsha about getting arrested for being at the Brionna Taylor protest. Porsha says she doesn’t regret anything, she was arrested before and she wasn’t scared. Porsha says she doesn’t think people realize what black people are going through right now. Falynn has gifts for all the women.

Drew is telling Ralph to take some boxes, she needs a little help. With her three surgeries, her life is crazy. She wants to go over to the new house. He says they have to do an appraisal, his attorney has to be involved. He tells her to just pack and he will take care of the rest. She says she wants to be a part of the process. Ralph is controlling and sometimes she thinks he just doesn’t see how she wants to be involved. She tells him that they are a team. Drew hates having arguments with him. Drew tells him that she found them a councellor, he agrees with getting one.

Mike and Cynthia go see their wedding planner, Courtney and Amanda, the rep for the Governors Towne Club. Cynthia hopes that Mike is going to be sold on the venue. Mal shows up. Mike asks what the covid restrictions are. Amanda says they have a lot of indoor and outdoor, and masks. Mike says he really doesn’t care about the venue, the date means more to him, 10/10/20.

They get into an argument, Mike says she doesn’t sound excited. Mike tells her they need to have a plan B because they are in the middle of a pandemic. Cynthia’s energy shifts, she feels like her back is against the wall and ti is not a good feeling. On the way home, Mike tells Cynthia they can have the most expensive wedding and get divorced three months later. He says that they can’t get married there on the date they want, then they will just postpone. He asks her if they are going to get married on 10/10/20, she says she doesn’t know.