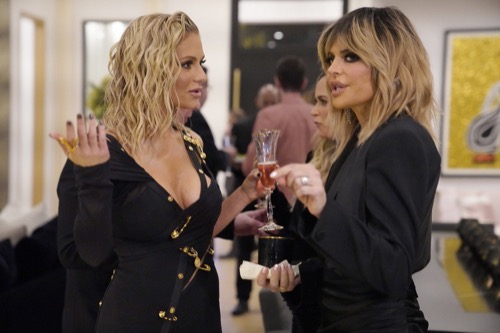 Tonight on Bravo The Real Housewives of Beverly Hills airs with an all-new Wednesday, August 12, 2020, season 10 episode 14 called “Denise and Desist” and we have your RHOBH recap below. On The Real Housewives of Beverly Hills season, 10 episode 14 as per the Bravo synopsis, “Denise is a no-show at Dorit’s housewarming party and fails to keep plans with Garcelle twice in one week.

The group hops on a private jet to celebrate Erika’s Broadway debut, while Lisa and Denise try to salvage their 20-year friendship in a tense one-on-one.”

Garcelle is thrilled that Split Marriage is finally going to be made. Dorit is trying to decorate the house for a party, she wants everyone to come together and bury the hatchet.

Lisa Facetimes Erika in NY who is there to appear on Broadway, and won’t be at Dorit’s party.

Garcelle is getting her makeup done, she thinks Denise is feeling vulnerable with the group and she wants her to know that she has her back.

Lisa arrives for the party and greets PK, he offers her non-alcoholic champagne; Lisa politely smiles, but she wants the alcohol. Kyle shows up with her husband and her friend Kaye is there as well. Adrienne arrives, and so do more guests. Outside Denise’s apartment, Garcelle calls her and gets the answering machine; she is in the limo with her boyfriend Michael. She talks diamonds and he asks her what is her minimum karats.

At the party, Dorit and POK welcome everyone to the party. She introduces Simon, an illusionist, and mentalist. Garcelle makes the decision to leave without Denise and head to the party. Lisa is surprised that Denise is not with Garcelle, she tells her that Denise was a no show. Lisa thinks this is really strange, Denise said she was coming. Lisa texts Denise and it doesn’t go through. Garcelle is upset that she was stood up, she says that Denise could have at least said something.

Lisa finds out that Denise spent time the day before with Camille and she is not happy about it. All of a sudden, Brandi shows up, Dorit goes over and welcomes her. Brandi reveals to Dorit that she sent a text to Denise asking why she made her look like a liar. PK tells Garcelle they got a text from Aaron saying there was a family emergency and Denise was not coming.

Garcelle and Lisa meet and enjoy a drink together, Dorit arrives. Garcelle says Danielle reached out to her the day after the party and she didn’t contact her before the party, because she didn’t want her to lie to anyone. Denise was supposed to meet with Garcelle, but it didn’t happen, Denise dropped out. Garcelle is pretty upset about it. Lisa is wondering why Denise wouldn’t reach out to her. Garcelle says she thinks Denise thinks Lisa is the bad guy in this movie. Lisa says that Denise is playing a game. In the following days, Denise sent cease and desist letters to cast and producers. On January 8, 2020, Daily Mail.com reported that Denise stopped filming RHOBH after her passionate months-long affair with Brandi Glanville was exposed to castmates on a trip to Rome.

Two weeks later, Denise calls Aaron and tells him that she is going to meet with Lisa. Denise arrives and Lisa’s house, they hug and tell each other they missing the other. Denise asks Lisa if she knew Brandi was going to be at the party, she says no. Denise says she didn’t go because she knew that Brandi was going to be there. Lisa tells her that she was worried because she said it was a family emergency. Lisa says what is going on is none of her business.

Denise says that nothing is going on, her interaction with Brandi was limited – she was an acquaintance and that was it. Lisa asks why Denise wouldn’t pick up the phone and just ask Brandi why she is doing what she is. Lisa mentions the cease and desist, Denise wants to know who told her. Lisa won’t tell. Denise says what Brandi did was slanderous and that is why she sent the cease and desist. Lisa tells her that she is there for her if she wants her.

Some of the women head to New York to see Erika on Broadway, and Erika got rave reviews for her performance, but the show was shut down after two months due to the COVID-19 outbreak, so she returned to LA to be with Tom. Garcelle decided that she wasn’t that hot for Michael and is now on the hunt for someone spicier. On February 25, Teddi gave birth to a baby girl named Dove.

Kyle’s fashion line is being sold online, her loungewear is selling through the roof during the quarantine. The Bold and the Beautiful was one of the first shows to restart production, because of health protocols, Aaron has been a stand-in for Denise’s love scenes. With Harry home from the East Coast, Lisa’s returned to her true passion, dancing on Instagram. Although her Capri room is closed due to Covid-19, Dorits’ kitchen is open for Phoenix’s new cooking show.