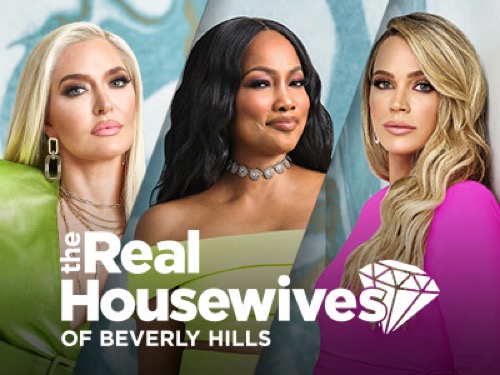 Tonight’s episode is going to be filled with more crazy housewife drama that you won’t want to miss, so be sure to tune in for our The Real Housewives of Beverly Hills recap between 9 PM – 10 PM ET!  While you wait for the recap make sure to check out all our RHOBH news, spoilers, recaps and more, right here!

The ladies were heading to NYC. They do this once a year for the NY Fashion Week. This is their pilgrimage so to speak and its extra special this year because Kyle is one of the designers. Kyle even asked some of her fellow housewives to be in the show. Denise is one of them. Denise wasn’t that big on Fashion Week much less the NY edition. She was coming mostly for Kyle and she left her family behind in Malibu. She and Aaron have been through so much. It was their first year of marriage and they were forced to leave their home because of a fire. They ended up living in hotels for a while. The only good thing about her first year of marriage is that they’re still having sex every day.

Kyle meanwhile realized she was an amateur. She put together a fashion show and she didn’t know what she was doing. She forgot several things along the way. She also had last-minute fashion mayhem because there were multiple pieces in the collection that she had never seen nor she did approve of and so she had to toss them. Kyle didn’t really “design” the pieces. She more or less left that part up to someone else and she put her name on it. Kyle didn’t go through the pieces until later. She went around pulling stuff and it frustrated her team. It got so bad that Dorit felt she had to step in.

Dorit modeled some of the pieces for Kyle. It helped her realize what should stay in the show and what shouldn’t. Dorit also offered a listening ear. She and Kyle talked about the show. She helped alleviate some of Kyle’s worst fears. They also had the time to relax and to enjoy their hotel rooms. Everyone got nice rooms in NYC. Garcelle was new to the show and she still knew she needed nice rooms. She made sure she got a view. Garcelle was also happy to be back in NYC. She came out there when she was seventeen to pursue a modeling career and so she was like Erika. Erika also came out to NYC to pursue a career.

Funnily enough, this same trip took them both in opposite directions. Erika went on to become a stripper to pay the bills and she was there for two years before she moved. Garcelle went from being a model to an actress. She later gained notoriety for being on the Jamie Foxx Show and she knew Denise from an unaired pilot they did years ago. Denise and Garcelle stayed in touch. They were glad to see each other again in NYC and they talked about Charlie. Charlie responded publicly to Denise’s claims. He called her a liar and she said that was tame for him. He’s called her a lot worst things in the past.

Denise never took Charlie to court. He hasn’t paid child support in a year and all of Denise’s friends were telling her to take him to court over it. Erika even made some calls for her. She told Denise to confront the issue and Denise won’t do it. She said she knows how to handle Charlie. She feels better doing things her way than going to court and so she said she wasn’t even going to show up to court. She was going to skip it. Denise went back to enjoying her time in NYC. She and the others went out to dinner and Kyle needed to step away to call her husband. The longest she’s ever been away from her family is five days.

She misses her husband. She called Mauricio and he was giving a party in her absence. Only Kyle wasn’t upset with him. He was still her “love bean” and she eventually went back to dinner with her friends. She even met new people. Lisa brought along her friend Sutton. Sutton was rich. She was married to a hedge fund guy and her divorce set her up for life. She loves going to Fashion Week. She travels to all the shows and she buys couture. Her outfits tend to look ridiculous, but they are expensive and she is a little judgy about other people’s outfits. She looked down at Erika’s dress because it was so short and she called Teddi’s outfit a romper.

The same Teddi that surprised everyone with her news. She later told the table she was pregnant. She always wanted another baby and so she was glad to be pregnant again. Teddi was doing great with her pregnancy. She was still working out everyday and she Erika admired her energy. Erika slept till noon when she was pregnant and she was being sick on the subway. Erika also spoke to Sutton. They were both from the south. They grew up with southern mothers that took no crap from them and they were the same way with their own children. Sutton said she let her son cry in his crib because that’s what was best for him.

Parenting tips aside, Sutton was a good addition to the group. She and Garcelle went to Kyle’s fashion show and plenty of people showed up. Kyle’s famous nieces showed. Her daughters were in the line up with her friends and it was a great show. Everyone had a fun time. They were laughing and smiling and so the rest of the season went downhill from there. Denise had a secret. This secret came out and she tried running from it.

And now it seems she’s ready to talk.