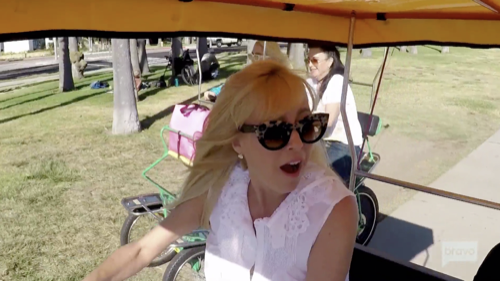 Tonight on Bravo The Real Housewives of Beverly Hills airs with an all-new Wednesday, May 27, 2020, season 10 episode 6 called “Santa Denise” and we have your RHOBH recap below. On The Real Housewives of Beverly Hills season, 10 episode 7 as per the Bravo synopsis, “What promises to be a relaxing trip to Santa Barbara instead opens old wounds for Dorit, Erika, Teddi, and Kyle.

After feeling judged as a mother, Lisa Rinna turns the tables on Denise, forcing her to examine her own history of risqué behavior. Meanwhile, Garcelle weighs the pros and cons of being a working mom as she prepares to leave town for a job.”

Kyle invited everyone to Santa Barbara, but when she did things were not as tense as they are now between the women. Dorit is the first to arrive and Kyle tells her that she wants to put the past in the past and move forward, her friendship means a lot to her. Dorit just wants Kyle to admit that she is closer to Teddi, but she won’t.

Garcelle is backing her bag, gets in the car is on her way. In the car, her producing partner, Lisa, calls her. She tells her that she would love to have some time to talk before she gets on the plane. Garcelle meets the boys, Jax and Jaid as they get off the school bus. She tells them that she is going to miss them, she is on her way to Nashville.

Lisa arrives at Kyle’s house. Teddi is the next to arrive, then Erika, even though her feelings were hurt by Kyle. Sutton arrives, Denise is going to be late and Garcelle can’t make it.

Denise is busy filming. For the last months, she has been working on The Bold and the Beautiful, and because she plays sexy characters, people think that is who she is, but she is not.

In the van, Kyle tells a story about her father and her memories in Santa Barbara. The women arrive where they are staying, Kyle found it online and the views are amazing. There are eight bedrooms, cooking, and cleaning staff. They get settled and head out, they leave a note for Denise. They go bicycle riding, and it becomes a competition, like everything with the women. Next, they take a stroll and go enjoy a charcuterie board and wine tasting. They see a dolphin in the water, then Denise walks in. Kyle and Denise haven’t been getting along, Kyle doesn’t know if she should say something or just let it go.

Denise arrives and the other women are already three sheets to the wind. Lisa calls Garcelle on video chat to show her the fun they are having. They tell her that they miss her. Denise tells the women that if they don’t quiet down they are going to outstay their welcome. The women go back to the house, Kyle is on the balcony enjoying the beautiful view and nobody will join her. They head outside to have dinner, the chef comes out to explain what they will be eating. Lisa asks Denise if she is still doing Bold. Denise talks a little about her role.

Lisa asks her what it is like to shoot a three-way, Denise says it is uncomfortable. She talks about Wild Things, she didn’t want her father to know the role she was doing. Lisa asks her how she will feel when her girls see it, she doesn’t know. Lisa says that when her sex book came out, her daughter read it and she was happy she did. At least she got advice from a good source. Kyle apologizes to Denise for the other night. Denise says that she had the kids at home when they were over and she didn’t appreciate that they talk about threesomes. Erika says it is a little naïve, it is probably nothing that they haven’t heard before.

Denise doesn’t want to talk about the issue anymore. Sutton says she would apologize but she did nothing wrong. That ends the evening, the women all go their own way up to their rooms. Kyle asks Teddi if she thinks Denise will get over it.

The next morning, Lisa made the coffee and didn’t measure, she tells the women that it is going to be really strong. The women sit down for breakfast. Sutton says that she felt the evening was tense and nothing was resolved. It is a tough group, lots of strong personalities. Lisa tells them that if anyone has a problem with anyone they should just say it. Dorit says that she didn’t like it when Kyle said that Erika was not as good a friend as she thinks she is, it was strong and hurtful. Kyle says it was just because everyone was coming at her and when you are upset, you say things that you don’t mean.

Kyle apologizes to Dorit. Lisa says that she didn’t feel comfortable about the conversation last night when Denise ended the conversation and said she didn’t feel like talking about the children. Denise says that she wasn’t angry, now she knows, not to have the children around this group. Lisa says she feels that Denise is just trying to make them feel bad. Denise says she is not judgemental.

Lisa says she is contradictory, she posted a photo of her husband after he had a happy ending. Lisa asks Denise if she talks to her children about the hookers her husband brings around. Denise is upset, she has been friends with Denise for twenty years and can’t believe what she is saying. Kyle thinks Denise is living in denial. Lisa asks the group if they feel better after talking, doesn’t look like it.