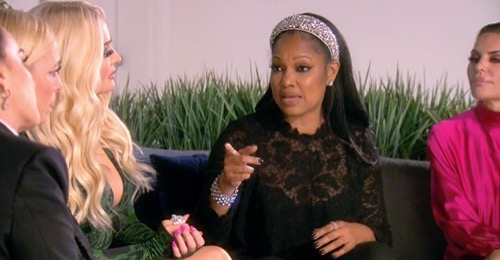 Tonight on Bravo The Real Housewives of Beverly Hills airs with an all-new Wednesday, June 3, 2020, season 10 episode 8 called “Mind Your P’s and BBQ’s” and we have your RHOBH recap below. On The Real Housewives of Beverly Hills season, 10 episode 8 as per the Bravo synopsis, “Garcelle Beauvais feels snubbed by Kyle Richards. She learns what “casual” means in Beverly Hills. The Bold and The Beautiful Denise Richards calls Teddi Mellencamp Arroyave a  “Sh– Stirrer.”

Before the barbeque, there was Garcelle’s event and things did not go well there either. Garcelle was honored for her work with the LA Mission. She grew up struggling and she had wanted to help others once she was in the position to do so. Garcelle is proud of the work she does. She likes being able to help people and she tries to encourage her friends to do the same. Garcelle invited the ladies to the event. She wanted them to see what she was doing and take part in this moment with her because she had been proud of what she did. She also hadn’t been passive-aggressive with anyone. She invited everyone and she told them she wanted them there.

She didn’t invite them and say that she doesn’t want them to come. Garcelle wasn’t going to play those games. She invited the ladies and she thought they would all enjoy the night together, but the drama started before they even got to the event. Garcelle went over to Lisa’s so that they could go to the venue together. They were actually in the car when they brought up Denise and Denise’s problem with Kyle. Denise had said a lot of crap about Kyle behind her back. Lisa thought Denise should bring her problems directly to Kyle. She thought Denise should be more like Garcelle because Garcelle wasn’t afraid to confront people and she did that with Kyle.

Garcelle talked to Kyle about her problems with her. She thought Kyle was a little self-absorbed and that they weren’t good friends because Kyle couldn’t stop focusing on herself long enough to pay attention to what Garcelle was saying. Garcelle had even told Kyle all of this. The two of them were not close and Garcelle brought it up again when she was giving her acceptance speech. Garcelle said up on the stage that she would like to thank her new best friends. Only she then added the part “some of them not so much” to the statement. She also made eye contact with Kyle when she said it and so Kyle knew she was talking about her.

Garcelle laughed it off as if it was a joke when she later rejoined the table. She and the ladies talked and Denise went home early. Denise went home because she said she had to return to her kids. This was odd because they all had kids and so the ladies just thought Denise used her own children as an excuse. Denise had introduced herself as someone sex-positive. She’s being asked about that sex life and all of a sudden she clammed up. She’s not talking. Denise doesn’t want to talk to the ladies and she doesn’t even want to bring her children around them either because she said she couldn’t trust them not to say something inappropriate.

Denise went home. The rest of the ladies stayed and they talked. Garcelle even addressed her comment earlier with Kyle because it had been about Kyle and Kyle knew it. Kyle said she doesn’t really know Garcelle because Garcelle is constantly missing out on things. She told the other woman she would like to get to know her and Garcelle didn’t really buy it, but she made peace right then and there because it was the easier thing to do. Garcelle had cleared the air with Kyle. She and Lisa thought Denise should do the same and Denise wasn’t ready to do so. Denise hadn’t even talked to her husband about what happened in Santa Barbra.

Denise eventually brought it up with him. They went out to dinner and she finally told him what happened. She said she felt her friends were adding baggage to the crap her children have to face. She also said Lisa calling her a hypocrite because she never had a problem with Lisa and her comment felt like it came out of thin air. Denise also labeled Lisa the real hypocrite because Lisa must have had a problem with her since “Wild Things” and she never mentioned it until now. Denise said all of this to her husband. Yet, she refuses to bring it up to the women she has problems with and so Denise ignored the problem even as she was invited to Kyle’s barbeque.

Denise didn’t let anyone know how upset she was until she showed up at Kyle’s without her kids. Denise at first pretended that the kids had prior commitments and then later she confessed she didn’t want to bring them around all the drama. This came as shock to the other women. The other women with younger kids had brought their children along and so they were upset with Denise’s statement. They confronted her on it. Denise claimed her kids had their own lives and that she didn’t want to mess with that over what could be a very awkward lunch. Her husband defended her. Garcelle defended her. It was the rest of the ladies that felt offended.

It had felt like a personal snub. Lisa had even asked how her daughter had reacted to hearing about threesomes because she thought the teenager might have just laughed and ignored it and she was right. Denise’s daughter hadn’t been upset with hearing Denise’s friends talk about a threesome. She thought it was funny. She had laughed about it with her mom and so it was Denise that was turning it into a big deal. Denise was also accused of mom-shaming. She was letting the other women know that she was doing what was best for her children and so what does that say about them who were bringing their children around.

Also, Denise’s husband was a problem. Aaron kept trying to put down the other women and he was being a real jerk about supposedly defending his wife. He was being mean when he didn’t have to be. Aaron would tell the women they crossed a line. He said they didn’t want that around their kids and he implied that the women should look in the mirror before they judge his wife. Not that Denise needed him to defend her. Denise was fighting back with the women. Denise also started dropping the f-bombs around Dorit’s daughter and that was the height of hypocrisy. She didn’t care how she was affecting someone else’s daughter.

Denise also knew she wasn’t going to stay at the barbeque. She told Aaron at the beginning that they needed to find someplace to have dinner because they weren’t going to stay long and so she and her storming out as they did was planned. She planned that from the start.