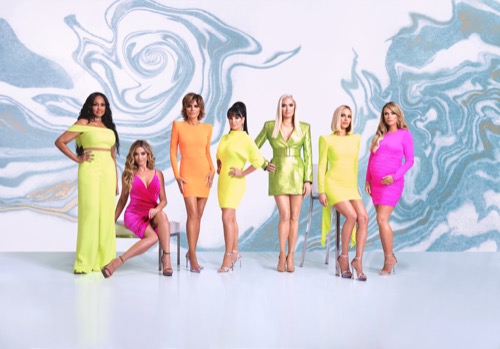 Tonight on Bravo The Real Housewives of Beverly Hills airs with an all-new Wednesday, July 15, 2020, season 10 episode 10 called “Black Ties and White Ties” and we have your RHOBH recap below. On The Real Housewives of Beverly Hills season, 10 episode 10 as per the Bravo synopsis, “Garcelle finds herself in a tough spot during a business meeting. Lisa questions Denise’s motives when Denise’s behavior is filled with shades of grey.

With Dorit’s help, Kyle throws a black and white charity gala full of familiar faces from years past. Erika tries to avoid being “mansplained” to again, while Camille’s road to reconciliation is bumpier than she expected.”

Kyle was surprised when Camille reached out to her. Camille had previously burned some bridges by calling the cast the “Witches of Eastwick” in her defense of Lisa Vanderpump and it hadn’t ended there. Camille took her grievances to twitter. She accused some of the cast of being drunk at the reunion show. She called them sloppy and she literally went on the attack. Camille had been so rude so vicious that Kyle thought their friendship was over. She thought she would never see Camille again and yet Camille reached out to her. Camille wanted to clear the air. She had moved into a new house after her last one burned down and she wanted to begin again with the ladies.

Camille reached out to Kyle because she wanted Kyle’s help in making amends. It was so odd to see her again much less hear what she had to say and so Kyle had no idea what to do. She was sorta confused. She didn’t think Camille was being entirely truthful about what happened back when she went off on everyone and at the same time, she was about to throw a party. Kyle and her husband were big parties. They loved throwing them and they were about to throw a “Black & White” party. Kyle considered inviting Camille and Camille wasn’t the only she was iffy about. Kyle had some concerns about Denise as well.

Denise has been acting unlike herself lately. She’s easily offended nowadays and she doesn’t want to talk to the ladies or hear what they had to say. She’s been letting her husband talk to her. Aaron has been really rude to everyone. He snaps at them and no one knew where he was coming from. The ladies hadn’t done anything to Aaron. They usually treated him with respect and they had no idea why he was going out of his way to be rude to them. Aaron was getting involved in women’s business. He needed to let them handle it and Denise needed to be the one to tell him. Denise met with Lisa Rinna.

Lisa told her that she’s been hearing things. Specifically things about Aaron’s attitude. Lisa asked Denise about it and Denise kept repeating the same old line. She says a line had been crossed when they brought up her sex life in front of her children. Denise had been really honest about her sex life last season and so Lisa believes she’s trying to walk some of that back. Lisa believes that Denise is conveniently using her children in order to be angry. She was looking for an excuse and they provided her one. Denise wasn’t being honest about it. She wasn’t even being honest about how she doesn’t really like Kyle and so Lisa called bullsh*t.

Lisa realized Denise was putting on act. She doesn’t truly understand the reasoning behind it, but that doesn’t mean she was going to be fooled either. Lisa and Denise didn’t agree about what’s going on. They left things at a stalemate. Lisa didn’t even get an answer about whether or not Denise was going to Kyle’s party. The party was the next night. It crept up on them before they knew it and, yes, Denise went. She went with her husband Aaron. The two dreaded the party because they said they didn’t want to hear what the girls had to say and still they went. Everyone went. Camille went and other former members of the real housewives went.

It was for a good cause. Kyle was raising money for the hospital and she admitted in her confessional that she went above and beyond for the party. She spent six figures. She said she needed to raise two hundred thousand dollars else she should have cut the party and just have given the hospital a check. Kyle’s party had everything. The whole event was beautiful and everyone was enjoying themselves. They were enjoying themselves right up until they found out Camille was there. The other ladies weren’t too thrilled about seeing her. They thought it was going to be awkward and so Lisa decided not to hide her feelings.

Lisa went up to Camille. She told the other woman that she had been an a**hole on twitter. Lisa told Camille that she didn’t have to do all that in such a public way and Camille decided to be upset about Lisa’s delivery. Lisa walked away as Camille was complaining. Lisa said that these women (i.e. Camille and Denise) needed to take responsibility for their crap. Lisa hadn’t wanted to hear Camille’s excuses and so she left. Camille then became worried that the others were going to take issue with her as well and she considered leaving. Only she didn’t. She stayed and the women continued in coming up to her airing their problems with her.

Denise then showed up. She greeted some past real housewives members and she even hugged Brandi. Brandi was another surprise invite. Kyle decided to mend bridges with her and so Brandi was invited with the hopes that they might repair their friendship. Kyle was very generous with her invites. She didn’t know that Denise would go cozying up to Camille or that Camille would get into it with Teddi. Teddi was like “I know you don’t like me”. She hadn’t wanted Camille to pretend with her because the last time had been very eye-opening. And so Denise got to watch as Camille tried to make amends.

Hopefully, it would have given her some ideas for herself.