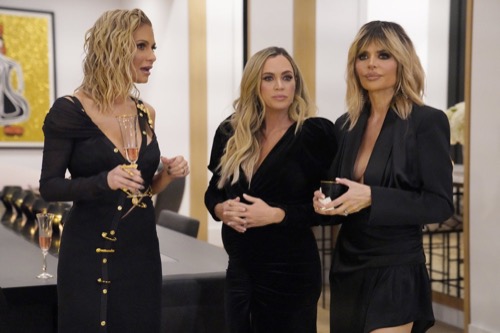 Tonight on Bravo The Real Housewives of Beverly Hills airs with an all-new Wednesday, August 12, 2020, season 10 episode 13 called “That’s Not Amore” and we have your RHOBH recap below. On The Real Housewives of Beverly Hills season, 10 episode 13 as per the Bravo synopsis, “While a Vespa ride reminds Kyle and Dorit just how much fun they can have together.

Denise calls out Lisa for betraying their friendship; a tearful Lisa joins Denise, Garcelle, and Sutton to find redemption at the Vatican.”

The women are in Rome, Italy. At dinner, Denise talking about the things that Brandi said to her about the group. Teddi asks Denise why is she having a relationship with Brandi if she doesn’t like her. Denise says she didn’t say anything about them to Brandi. Lisa tells Denise that she has chosen to sit there and she needs to own it, and if she doesn’t want to be there then she should go.

Denise tells Lisa that she is being rude. Teddi says that her guards up now. Lisa says she doesn’t know what she believes anymore. Lisa is called out for dancing on Instagram, the women are wondering if that caused her daughter’s anorexia. Teddi says that you can nail it down to one thing, her daughter having food issues. There definitely is a dark cloud over the women.

The next day, Lisa and Denise sit down to talk. Denise tells Lisa that her energy is like she is attacking her and coming off as a mean friend and its to hurtful. Lisa says it is not cool what Denise said about Brandi, that she said she has had sex with every woman that she has come into contact with, including women in their group. Denise says it is true. Lisa calls it tit for tat and says she doesn’t like it.

Denise says that she always has Lisa’s back and it is not right the way she treated her. Denise says that she is hurt, not mad at Lisa. Lisa starts to cry and tells Denise that she failed her. The two are crying, they both hate to see each other sad. They both promise to be better friends to each other.

Dorit and Kyle get helmets on and go for a ride in motorcycles around the city. Denise and Lisa meet up with some of the other women to go to church. Lisa tells the group that she needs church right now because she hasn’t been herself in a while. Lisa tells everyone that her house looks roman because her husband lived in Rome for three years.

The women arrive at St. Peters and there is a lineup around the block. Lisa meets Kyle and Dorit in a restaurant, she tells them about her little breakdown with Denise. Kyle feels for Denise in this position. Lisa says she cried a lot and so did Denise, she is really hurt about the accusations and afraid for her children. Lisa thinks Denise is in pain. Lisa says she was probably too harsh the evening before. Dorit says that tonight they are all having dinner together and she hopes Denise doesn’t shut down.

It is time for dinner, Denise has thought about things and she plans on saying her peace at dinner. She has been listening to these women for the last few nights in Rome and she is ready to say something. It is there last night together, Denise makes a toast. Then she tells them that she is so happy that she spoke to Lisa, but to be honest, there is so much judgment in this group. Every single dinner she has been on the receiving end of what feels like being attacked the moment they sat down, and it is not cool.

Furthermore, her husband didn’t want to go on this trip, he had a feeling and he was right. She goes on to say it is ok to have fun, but this is the worst trip that she has ever been on and she doesn’t deserve this. She calls them mean girls. Lisa doesn’t like the whole mean girl’s thing, because she knows last year they were called mean girls on social media. Denise says she is going, she said everything that she had to say, Lisa puts her head on the table, she can’t believe this happened.

Denise returns to the table, they thank her for returning. Kyle says she wants to resolve this and move on. Lisa says she thinks it is best if they don’t label each other and call each other names.