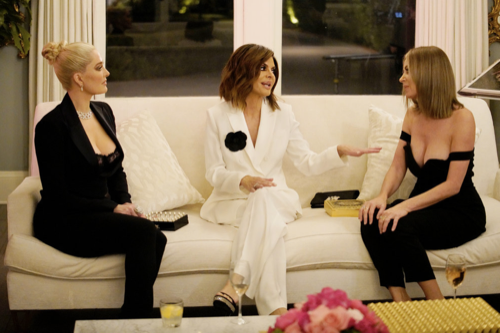 Tonight on Bravo The Real Housewives of Beverly Hills airs with an all-new Wednesday, September 2, 2020, season 10 episode 15 called “Reunion Part 1” and we have your RHOBH recap below. On The Real Housewives of Beverly Hills season, 10 episode 14 as per the Bravo synopsis, “The ladies come together for a virtual sit-down to rehash a season of incredible highs and shocking lows; Kyle drops a shocking accusation; Dorit and Sutton recount their awkward exchange at Lisa’s daughters’ clothing line launch event.”

Tonight we have the reunion show and we begin with a look back at Garcelle’s journey. Sometimes she can rub people the wrong way because she is so blunt. They zero in on her relationship with Kyle. Host, Andy Cohen reminds Garcelle that she said Kyle was the least welcoming when she joined the group. Kyle says that she is surprised, she was nothing but nice to Garcelle and she was honestly upset. Garcelle says she only said it because she could only remember her name. Dorit has problems with Kyle’s listening skills, Andy asks her about it.

Dorit admits that Kyle talks over people, but it is not nice singling her out. Kyle apologizes and says that when people argue that happens. Denise says it is not always during arguments, she glazes over all of them. Kyle gets back in the conversation and reminds Garcelle that she went to her charity event, raised her paddle to donate $5000.00, and never paid. Garcelle is outraged and says that is not true and she better watch what she is saying. The other women are shocked, Kyle tells Garcelle that she is not genuine and truthful. Andy asks Garcelle who warned her about Kyle, she says she won’t go there.

Andy asks Garcelle how she feels about being the first black RHOBH. She says it is cool, it is always cool to be the first anything. He asks if she felt pressure, she says yes. She goes on to say that black women are labeled as angry, and they wanted her to be that way. Erika says she hit it off with Garcelle right away because she liked her, and she is a little more open than other women.

Sutton has put her house up for sale, she is looking at a new one. We look back at some of Sutton’s scenes. We get to see a lot of the couture that she wears. Sutton confided in Dorit one time, and she completely blew it out of proportion. Dorit tells Sutton that she apologizes for making it a bigger issue than it was, she mistook her energy for being angry. Sutton says if she was concerned about how she was feeling, she could have pulled her aside. Sutton tells Dorit that she is avoiding the question. She brought it up to the group and wanted to announce it, it freaked everyone out.

Lisa says that she has had problems with Sutton, but they have worked things out. Andy asks Sutton what was in the gift bag that got rave reviews from the women. Sutton jokingly says that she was trying to buy their friendship and she doesn’t know if it worked or not. Erika says that Sutton is a well-bred social woman and gave those gifts from the heart. Dorit says that she is extremely kind and sweet.

They go back to when Sutton said that she thought Teddi was going to be boring. Teddi says that Sutton didn’t give her a chance to get to know her. Sutton asks Teddi if she is going to let her small disdain for her clothes to get in the way of their friendship. Sutton says they all have insecurities, and they do tense up some times.

We get a look back at Denise Richards, specifically when she talks about sex. In fact, her daughter overheard them talking about threesomes. Lisa says they talk about sex all the time, that is all Denise talks about. Dorit tells Denise that it comes out of her own mouth and her own BBQ in front of her children. Dorit tells Denise that she was upset enough to take her aside, but she didn’t care. They start talking about a comment that someone on social media said to Lisa, calling her racist and that she should lose her job; Denise liked the comment. Denise claims that she didn’t read the whole post and didn’t realize what it was about. Denise claims ignorance, Lisa calls her a liar.

Denise says that her children did hear things about what was said on the show from their friends. Erika says that everyone knows about Denise’s husband getting a happy ending from a 100-year old woman. Denise doesn’t respond to that, but she says she has felt uncomfortable this season, she feels like she is a target. Lisa says it is all gaslighting.