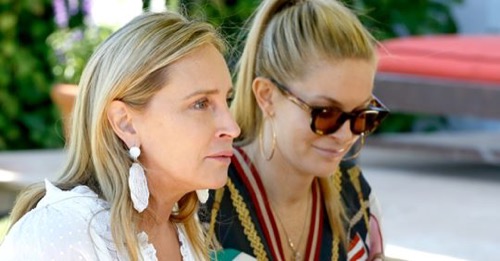 Tonight on Bravo TV The Real Housewives of New York airs with an all-new Thursday, April 23, 2020, episode and we have your RHONY recap below.  On tonight’s Real Housewives of New York season 12 episode 4 “Ain’t No Party Like A Hamptons Party,” as per the Bravo synopsis, “Hamptons weekend wraps with a tennis grudge match between Luann and Ramona, while Sonja’s dog groomers make a house call and Luann gets in on the action. A girls’ night at Ramona’s house turns into a wild ruckus as Leah, Tinsley, and Sonja go skinny dipping. Tiki torches are thrown, and a vibrator finds a home in the chicken piccata.”

Ramona wants to bring the girls to a friend’s party in the Hamptons and they don’t want to go. The conversations switch to trophy wives. Sonja swears she wasn’t one, accusing Tinsley of being one.

Ramona and Luann are playing tennis with a coach. Luann is angry still about being put in the basement. But she isn’t going to let it ruin their time. Ramona shares they are all staying home and skipping the party. Luann thinks she is trying to make up for things. Luann flirts with the trainer while Dorinda laughs about how Ramona only hires good looking people.

The girls cook while the housekeeper preps the table. Ramona gets stressed cooking on the grill. They all sit and eat and talk about their struggles. Luann talks about her past drinking and if she will drink. It is hard being around the girls when they drink.

The next day, the dog groomers show up. Luann thinks one of them is hot. After he massages the dog, Luann talks him into massaging her. He does.

The girls are all home and dressed for dinner. They get drunk fast and act out of control with vibrators and flirting with Ramona’s friend Jeff. Luann is embarrassed for them. Tinsley and Leah strip down to their underwear and jump into the pool.

Inside, the girls talk about John. Dorinda tells them how much she loves him. Ramona says she knows John has taken phone numbers from women. Dorinda doesn’t believe it. Luann thinks Ramona is being rude. Sonya heads outside and gets snaked too. They all start throwing the tiki torches into the woods before getting into the pool.

Luann comes out to see them in the pool. They are all acting crazy. They head into the house. Dorinda helps Leah cover herself up. Dorinda is speechless that Leah has wings on the ready parts.

Romana tells the girls she is leaving for the party. They all get annoyed. Luann thinks she is the worst host.

Sonya is drunk and starts to fight with Leah about being part of the JP Morgan. Leah tells her to let the name go. Who cares. They argue about marrying rich men. Dorinda tells them to all calm down. They don’t listen.

The next morning, Dorinda and Sonya do face masks and lay in bed. Ramona is annoyed. She wakes up to see the kitchen. Its a mess and the yard is destroyed. Leah admits she threw a tiki but cleans the kitchen. Dorinda comes down and she and Ramona fight. Dorinda reminds her she left them and went to a party. They head out and clean. Meanwhile, Tinsley is passed out cold with spaghetti in her bed!