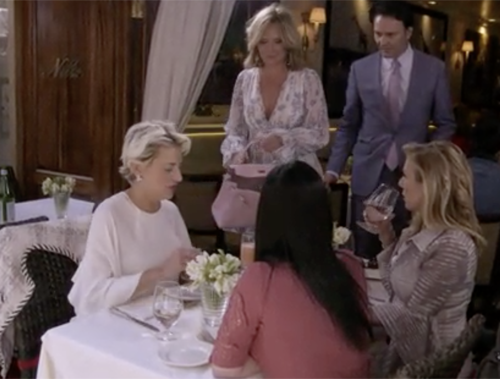 Tonight on Bravo TV The Real Housewives of New York airs with an all-new Thursday, May 7, 2020, episode and we have your RHONY recap below.  On tonight’s Real Housewives of New York season 12 episode 6 “Just The Sip,” as per the Bravo synopsis, “Leah and her mother are still at war; Tinsley shares about her dating life; Sonja’s fashion line is not doing well; Luann organizes a comedy show about anti-bullying.”

Luann arrives at Tavern on the Green to meet her friend Jacques, they have been together for 4 ½ years. They have a healthy relationship, they always keep in contact with each other. He is engaged, and she is happy for him. She tells him that her probation is over, she is taking it day by day. She likes spending time with the girls, but she doesn’t want to start drinking again. Jacques says the key is to have one good glass of wine. She is co-hosting a comedy event and she would love to have Jacques involved.

Dorinda walks by her old townhouse, it was a very special place for her and Richard. She stops by Nello to have lunch with her friends, Elyse, Ramona, and Sonja who is on a liquid fast. It couldn’t be worse for Sonja, the girls are ordering gorgeous food.

Tinsley is out to lunch with her mother, Dale. Her mom always loves to come, but now she has a whole other reason for coming, to see Tinsley’s babies, Strawberry and Shortcake. Dale tells Tinsley that she loves the dogs, but they are a lot of work. Tinsley tells her mother that she broke up with Bruce, and it’s just done, there is no emotion in it. Her mother asks her how she felt walking down that runway after all those years, Tinsley loved it. She mentions that she is a little irritated with the girls, particularly Dorinda, and she is not going to let her walk all over her again. Her mother starts talking about babies and she would love if Tinsley had one.

Sonja is over to meet Laura, the VP of Sonja Morgan Brands. Gaurav, the CEO, is also there and happy to see Sonja, they have been in business for many years together. They just had a fantastic show and she wants him to show her the money. He tells her that they haven’t sold any items beyond the 500 pieces, and it is a very select customer. She says she just needed to see it. He says there are no more sales since the fashion show. She says that she thinks it is going to be good to have a presence at Century 21.

Leah is on the phone with Kier’s dad, she says she will bring her to his place on Saturday. Rob and she were never married. She says they have made it a point to be best friends, even though they are no longer together. She asks him if he is lonely, he says he is busy. She wants to be dating more. She asks if they are going to do this forever, just be best friends. He asks her about her mom, she says her mother is not speaking to her because she drank in the Hamptons.

Luann is at Slate, she sees Marisa, her publicist. Chanel, a podcaster is there as well. They are hosting the comedy event together. Jacques walks in, he is there to practice for the show. She is very happy for Jacques and he has brought his fiancé who gets Luann’s stamp of approval.

Leah is talking to Ramona, she tells her to make up with her mom, no matter what. Leah gets upset and says she is always judged on her failures and not her achievements. Ramona is not like her mom, but she is very comforting right now. Ramona tells her to bring her mother a big bouquet of lilacs and makeup with her. Leah and Roman arrive at the show and are greeted by Luann.

Elyse is concerned that Luann took a drink, Dorinda tells her to mind her own business, she is not judge and jury. Time for the podcast show to start. Luann is called up on stage, she tries to tell a joke, but it falls short.

Jacques comes up on stage, it is his turn. Jacques can be very funny, but nobody understands a word he is saying. Dorinda wishes there was a bouncy ball in front of him translating. Sonja is talking and Jacques calls her out for talking over him. Other comedians come out on stage, but the women are all on their phones texting and browsing more than anything.

Dorinda and Leah start talking and Leah says she is intimidating sometimes, Dorinda doesn’t take it well. They are talking about the lunch that is planned with Tinsley, they all start arguing and they are at an anti-bullying event. Dorinda says she came with good intentions, and she is not staying there, she sees herself getting super mad. Leah tries to calm her down, but Dorinda leaves.