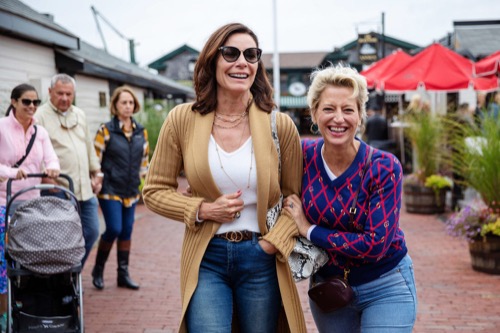 The night begins to spiral once Ramona is distracted by a man at the bar; Dorinda and Luann co-host a tea party in an attempt to help the ladies relax and reset.”

Newport, RI. Leah drank the night before to forget her life, the women talk about it at lunch the next day. Leah’s sister, Sarah, arrives, she introduces her to everyone. Ramona is glad that she arrived, it will keep Leah company. Elyse says she immediately loves her because she has dark hair and bangs.

4:30 pm, the women return back to the house, the women get changed for dinner. Dorinda has been drinking all day, Luann is worried that it is a red flag. Dorinda tells her that she spoke to John. They open up a bottle, and both have a glass. Dorinda says she doesn’t want to be a downer, but it is sad. Not talking to John she can get through it, but when she talks to him, reality sets in. Luann tells her not to beat herself up, this is a time for her to take care of herself, don’t worry, she will land on her feet.

8:00 pm, the women head to a restaurant for dinner. Tinsely is annoyed that some of the women went to the bathroom when their table is ready. Ramona starts flirting with two men at the bar, every time they go out, she gets up and talks to people to prove that she has still had it. Ramona finds out that one of the men are engaged, Tinsley is hoping that Ramona will stop and return to the table. Tinsley is so annoyed that Ramona is at the bar, Leah tries to calm her down. Tinsley goes to bar, Luann, Ramona, and Sonja are there and she says they are cougar-ing out.

Leah tells Sarah and Elyse that they should just forget about them and order dinner. Meanwhile, Dorinda is drunk. Leah goes to the bar, and Sarah, one of the men tell them that the other women are their freaking problem. Dorinda is over the top drunk, poor Elyse is sitting there listening to her. The other women are all shouting and Luann tells them to calm down a bit. Leah is flabbergasted by how women are acting. Dorinda gets up and tells them to stop, then she says she is leaving, she is out. Nobody even notices Dorinda leave. Ramona calls Sarah a demon, Luann gets up and says she is leaving. Leah and Sarah leave too and Leah throws ravioli at her as she is leaving. Leah feels bad at not being accepted, but she is still going to be her. Outside, Leah kisses Tinsley.

he next day, Sarah tells Leah that she is annoyed. Leah says she feels bad that she invited her and it turned to crap. She doesn’t feel happy or proud that she lost her temper and threw her food, and her sister had a horrible time. Sarah tells her that she sucks at dealing with people.

Dorinda is talking to Luann, she says she likes Leah. Luann says she threw a ravioli and once you push that far it is hard to go back. Luann says they need to help to fix this.

Elyse tells Ramona and Sonja that sometimes when she is with all of them, she finds it hard. Sonja says that Leah is a loose cannon. Romana says that if Leah wants to hang around with them, she needs to act a certain way.

Luann meets Ben for dinner, they talk about cabaret. She thinks the show this time around should emerge the audience, and continue with the comedian. She also wants to include Sonja in the show. Ben loves the idea.

Leah is out with her parents, Bryan and Bunny, they go to lunch. Things are not great between Leah and her mom since she started drinking again. She is probably more her father’s daughter. She tells her parents that the trip was a disaster. She says everyone was pounding dirty martinis and her kind of acted crazy in the grass. Her mother tells her that she is on a slippery slope with alcohol. Leah says she was just trying to escape a little.

Dorinda is at the rooftop of Oriana, she is throwing a tea party. The theme is to relax, relate, reset. Dorinda wants to have tea where there is no alcohol is involved. Leah is there first, she tells her to think before she speaks. Leah knows that she needs to take the high road, or there won’t be a reconciliation. Ramona arrives and she completely ignores Leah, even though Leah did say hi. Leah tells Ramona that she owes her an apology. Ramona says she walked away from that weekend upset.

Leah says that she is apologizing for what she did, not for who she is. Ramona gets up and gives Leah a hug to go forward. Ramona has a soft spot for her. Leah is emotional and she doesn’t know why. Tinsley shows up last, Leah tells her that she looks like a Barbie. Dorinda tells everyone to get up and change seats, so they can sit near someone different. Dorinda asks Tinsley to get up so they can have a private talk.