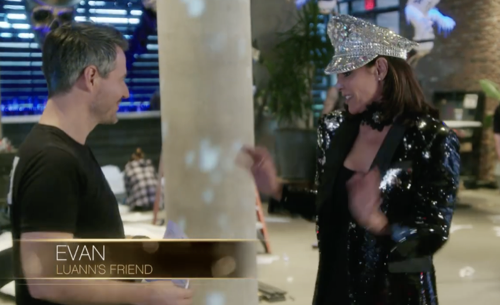 Tonight on Bravo TV The Real Housewives of New York airs with an all-new Thursday, July 2, 2020, episode and we have your RHONY recap below.  On tonight’s Real Housewives of New York season 12 episode 12 “Eat, Drink, and Be Scary,” as per the Bravo synopsis, “Looking for love again, Ramona meets with a matchmaker. Meanwhile, Dorinda and her daughter Hannah discuss Dorinda’s recent life struggles.

And to mark the end of Halloween week, Luann hosts a voo-doo themed dinner party where Ramona becomes the subject of everyone’s witchy ire..”

Leah is in the Halloween store, she calls Rob and tells him that she would love to see him in a priest costume, or Jesus Christ. Luann and Dorinda have arrived. Dorinda talks about Ramona planning her party, three hours of her day, and she suggested that she do a joint birthday with Luann whose birthday is days apart, but Ramona wanted it to be all about her. Luann tells them that she went and had drinks with Tinsley.

Ramona meets with Rori, the matchmaker – they talk about Ramona’s love life and lifestyle. Romona tells her that she wants someone who is financially stable like she is. Rori tells her that she is a great catch, and will find someone.

Sonja meets Elyse at a bar. Elyse complains about Ramona, she says she snubs her now that she doesn’t need her anymore.

Dorinda is out with Hannah, the two stop of lunch. Dorinda shows her a picture of Aiden, Richard’s son. Hannah tells her that as a person, she is a better role model now that she is single. Dorinda is very happy, she feels like her daughter sees her for who she is now.

Leah is out with Rob and her daughter in China town for dinner. This is the norm for her and Rob and he has been a rock in so many ways. Leah tells him about the lunch she had with her parents, they talked about him. They said, Rob is like their son, and she is so glad that they are close.

The theme for Luann’s Halloween party is voodoo. Ramona bought a costume for herself and Sonja online. Ramona arrives at the party with Missy, she sees a severed goats head and believe they put something that disgusting on the table. Ramona’s friend, Ron has arrived as well. Ramona calls Luann, she is next door getting ready and tells Ramona that she is early.

Sonja, Dorinda, and Elyse are in a limo, Sonja is already drunk and talking smack about Ramona. They arrive at the party, Dorinda is impressed with the layout and says she took a page from her book.

Sonja starts causing trouble, she calls out Ramona and tells her that she treats Elyse bad. Dorinda takes Ramona to the side and tells her that having her own birthday party is ridiculous, she should have a joint one with Luann. Leah has arrived at the party, Rob is there with her. Luann like Rob, she thinks he is kind of cute. Luann can’t believe that Sonja showed up at the party drunk.

Ramona is sucking it up, and ignoring Dorinda. Sonja calls Leah a freaking weirdo. Leah goes over to Sonja, Ramona is worried, she doesn’t want them to get into an argument. Ramona brought Missy, and Luann can’t believe it, the girlfriend of her ex-husband. Luann says that Ramona never ceases to disappoint her.

Dorinda stands up, she clinks her glass to get everyone’s attention and asks them if it is right when your girlfriend doesn’t like what you said and asks you if you are drunk. That is what Ramona did to her. Leah says she is drunk and happy about it. Dorinda continues, she tells Ramona that she is not nice and drunk Sonja repeats what she says.

Luann is feeling bad for Ramona, this wasn’t the place or time for Dorinda to do that. Meanwhile, Ramona is calm and doesn’t react. Elyse goes over to see if Ramona is ok. Leah is drunk and she starts acting out, playing with the seafood party. Ramona says someone put a voodoo on this party, she heads out to another party. Rob is on the dance floor with Leah, he tells her that he is going to leave soon.