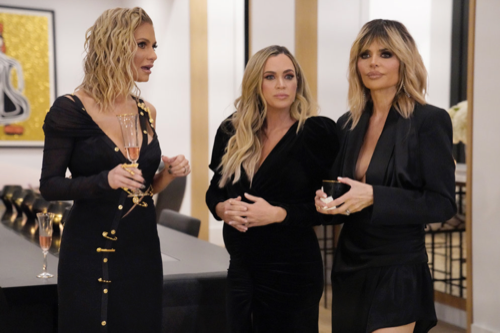 Tonight on Bravo TV The Real Housewives of New York airs with an all-new Thursday, September 10, 2020, episode and we have your RHONY recap below.  On tonight’s Real Housewives of New York season 12 episode 22 “Reunion Part 1,” as per the Bravo synopsis, “Before the cast members relive some of the most outrageous moments from the season, they express their frustrations about the behavior of one of the ladies during quarantine.”

The women all arrive for their first reunion. They are all in the room with Andy Cohen and they are all social distancing. Ramona says that she was in quarantine with her daughter and her ex-husband, and there is no hope for a reunion. Luann is still working on the shows even though they are not on. Leah says she was upset with Ramona because she didn’t take quarantine seriously. Ramona says it is not true, she was just trying to keep positive and live. Ramona tells Leah that she is the one that was nasty talking about her on social media and giving the middle finger.

Andy talks about when Dorinda was upset because Ramona went to a party that Donald Trump Jr. hosted and his girlfriend tested positive for COVID-19 after the party. Ramona maintains that as long as she was being safe she could go to parties. Leah says it is not about being safe at a party, it is about laughing and partying it up during a pandemic. The women get loud and all talk over each other, Andy has to tell them to be quiet.

We take a look back at Leah’s journey on the show and that fact that she didn’t drink for nine years and then started again; her mother wasn’t happy about it. Luann says she thought Leah was a tough woman but vulnerable. Romana says Leah listens to her and doesn’t judge. Dorinda likes that she is a different angle. Tinsley says she loves how Leah was confident, and she connected with her right away.

Leah says she started drinking the spring before the show started, it wasn’t the show that started it. Still, she is happy that her nine months of drinking was with the women. We take a look back at all the women drinking this season, and there were many moments when they were drunk. Fans say that the season was hard to watch with all the drinking. Dorinda says when the season ended they all stopped drinking except for Ramona who is always out. Leah says that everyone drank and it was fun and when she does, she is made to feel bad.

Luann says that she doesn’t want to label herself with alcohol, she is very aware and very careful. A viewer says Dorinda is mean when approached about her drinking. Dorinda says she doesn’t like it when people are accusatory with her and she feels uncomfortable with it. Ramona says that when it seems that she looked drunk, it was the meds she was on it that caused it.

This season Tinsley finally found her fairy tale ending with Scott and left the city. We take a look back at her journey. Leaving NY Tinsley was happy and looking forward to her future with Scott. They are engaged now and she says it feels surreal. Andy asks what was holding them back as a couple, she says it was because she was in NY. One fan says it is ironic that Tinsley is leaving Housewives of NY to be a real housewife in Chicago. She says that very few were supportive, maybe Leah was supportive. Tinsley says she couldn’t even talk about having babies on the show. One viewer asks if Scott gave her an ultimatum, the show or him. She says no.