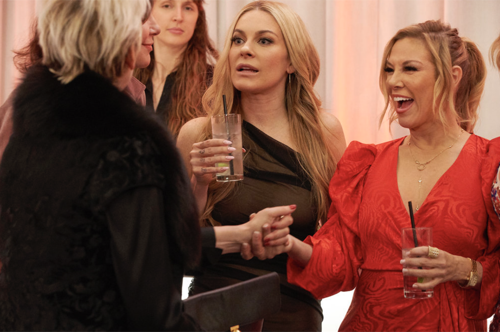 Tonight on Bravo TV The Real Housewives of New York airs with an all-new Thursday, September 17, 2020, episode and we have your RHONY recap below.  On tonight’s Real Housewives of New York season 12 episode 23 “Reunion Part 2,” as per the Bravo synopsis, “The housewives talk about significant moments in their travel to the Hamptons, Newport, and Mexico. Ramona accuses Leah of ruining her birthday party with some provocative moves at the dance floor.”

Dorinda feels that Tinsley has not been transpired in her life. A viewer asks why nobody came to Tinsley’s defense this season. Andy tells Dorinda that she was so mean Tinsley. Dorinda apologizes to Tinsley and tells her she should have handled things differently. Tinsley says too little too late. Leah says she was new, she tried to forge relationships with the two of them. Leah tried to have lunch with Dorinda and Tinsley, and Tinsley didn’t want to. A viewer says that Dorinda is jealous of Tinsley.

Dorinda says she is not jealous and wouldn’t want to be in the relationship that Tinsley is in with Scott. Andy asks Dorinda why she got so mad that Luann was going to toast Tinsley in the finale. Dorinda says she was mad because it wasn’t authentic. Tinsley says she is transparent, what more does she has to do. Dorinda says Tinsley left before the end of the show and they shouldn’t have paid homage to her. Ramona gets up to go to the bathroom, Andy calls her back to get her mask.

We take a look back at some of the trips the women have been on together. Andy asks Tinsley how she made out with her sister as a joke. Tinsley laughs, she says it happened twenty years ago, they were showing how to kiss. Andy says that he was impressed that Leah got Tinsley to strip and swim. Andy says that Ramona got a lot of heat for walking into the Mexican villa and referring to the wait staff as servants. Ramona owns it, she says she was wrong, she doesn’t always know the right thing to say. Tinsley leaves the group.

This year, Luann finished probation and was ready to raise a glass to a bright future. We take a look back at her story. Andy says that last year at the reunion they had had it with Luann, and asks what is the biggest change. Ramona says she is more real, Dorinda says she is more centered. Andy says he was happy to see Luann and Dorinda get back together.

Dorinda says she and Luann have a lot in common and they enjoy each other’s company. A viewer tells Luann to stop saying she was incarcerated. Luann says that is correct, she only spent one night in prison. Luann says her father had a problem with alcohol and she didn’t have the best upbringing, but she loved him and misses him every day. Ramona says that Luann has evolved so much and she is proud of Luann.

They talk about Luann’s show, Sonja says she doesn’t get paid, Luann says she pays her.

Andy says the women hit on every man in their path; he shows some footage from this season. A viewer asks Ramona about her relationship with William, she says they are just friends. Andy asks Dorinda if she is going to go out and date. She says she is in a new relationship, but she is waiting for COVID to be over and see where it goes.

We take a look back at Leah’s behavior and Ramona’s disapproval. Ramona says that Leah has a crazy side and it scares her. Dorinda thinks Ramona is threatened by Leah. Leah says that Ramona is harsh and judgemental with her. Ramona says that she is not used to someone like Leah, and she doesn’t like her when she drinks. Andy brings up the mental health issues with Leah and the fact that Ramona’s friend told her that Leah is bi-polar. Leah says her kid had no idea and she to explain it because Ramona brought it up on the show. Ramona tells her to own it and help America.

Andy switches gears asks Ramona if she had a facelift, she says no.