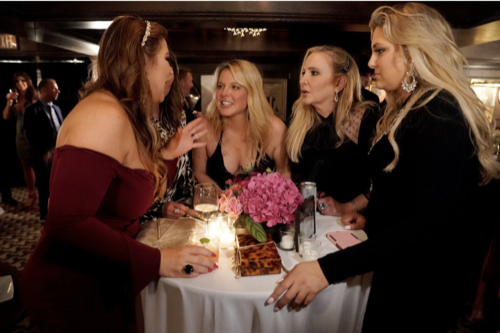 Tonight on Bravo TV the original housewife series, The Real Housewives of Orange County returns with an all-new Wednesday, November 25, 2020, episode and we have your RHOC recap below.  In tonight’s season, 15 episode 7 called, “Renewals and Regrets,” as per the Bravo synopsis, “Shannon and Kelly discuss their competing businesses.

Shannon hopes to repair her friendship with Braunwyn in light of Braunwyn’s vow renewal; Gina resolves to stay sober to support a friend; the women question Elizabeth’s relationship.”

Braunwyn’s vow renewal continues. Braunwyn is happy and she’s celebrating her marriage. She invited the ladies because she thought they would be happy for her. However, they couldn’t let her have this moment. They had to make it about them and how they were choosing to focus on their own petty grievances. Kelly and Shannon were feuding again. They were feuding again because Kelly mistakenly thought Shannon was coming out with a water line when she was not. She wasn’t coming out with a water line. Shannon was about to launch healthy tinctures that come in two-ounce bottles and she would have thought her friend would be happy for her. And yet she wasn’t surprised to find out Kelly had been talking smack behind her back.

Shannon said there are two Kellys. There was the Kelly that could be fun and who was down for anything. Then there was the second Kelly who couldn’t help talking crap about someone. Shannon wasn’t surprised to hear that the second Kelly was back at it because they’ve been down this road before and to be frank Kelly wasn’t the only one she’s feuding with. Shannon and Braunwyn were still on the outs. Braunwyn swears that Shannon referred to Gina’s house as sad and Shannon told her that she would never say that. Only Braunwyn wasn’t backing down on the claim. She was willing to upset Shannon to get to the truth and that’s why Shannon wasn’t afraid to break Braunwyn’s rules for this vow renewal.

Braunwyn asked the ladies not to bring tequila. Tequila was basically Braunwyn’s gateway drug and she didn’t want it around her as she celebrated her vow renewal. She specifically told the ladies not to bring it. She was very clear and still Shannon snuck some in. Shannon started drinking the tequila the moment she was out of Braunwyn’s eyesight and she got drunk fast. Shannon was slurring her words. She was also crying for a bit because Braunwyn’s vow renewal reminded her of her own vow renewal with her ex and how unhappy she was. Shannon is much happier now with her current man. It just didn’t stop her from drinking. Shannon was drunk and she made things worse by talking to people during the reception.

All of them could tell that she was drunk. Shannon even started speaking to the kids at the party and she told them how her marriage ended quickly after her own vow renewal. Like why would you say that out loud? She made people uncomfortable and she wouldn’t let the past go. She drunkenly confronted Kelly about this nonexistent water line. She again wanted to remind the woman that she didn’t have a water line and so Kelly called her out for being drunk. Kelly thought Shannon needed some water. She didn’t think Shannon should have drunk so much that she was wasted at someone else’s party and so Shannon tried to defend herself. She reminded Kelly that it had been Kelly’s idea to sneak tequila in.

Kelly snuck in a bottle. That is true, but she didn’t down the bottle to the point of being drunk and so Kelly chose to laugh at Shannon. She made a joke of her. She also flicked her nose again and she should know after Ireland how much that irritates Shannon. Shannon and Kelly soon forgot about their feud. They began joking with each other and it was like nothing happened earlier. They stopped being a problem at this vow renewal. The new topic of conversation suddenly became about Elizabeth. Elizabeth is getting a divorce. She already has a new man lined up and so she just wants money at this time. She wants the money she was owed from her ex-husband. She had given up on the idea of children for him and so she believes she at least deserves money for that.

Elizabeth was also considering freezing her eggs. She wasn’t sure if she wanted children now that the option was free only she was considering it and she didn’t really want to talk about it with her friends. Elizabeth could be quite secretive. She didn’t want to go into details about how she and Jimmy got together. She told her friends that it happened while she was married and later she tried to backtrack. She was just very secretive. The others noticed and they wanted the deets. They wanted to know what really happened. They were also judging Elizabeth for wanting lots of money from her ex. The other ladies thought Elizabeth got too addicted to the lifestyle and that she shouldn’t be focusing on the money she was getting.

Elizabeth didn’t know her “friends” were talking about this. She thought they were on her side and she didn’t know any differently until much later on. Elizabeth and the other ladies enjoyed the rest of the party. They all had fun and they were glad to see Braunwyn having fun as well. Braunwyn later told them she enjoyed herself more with being sober and so it’s unfortunate that her mother isn’t that supportive. Braunwyn’s mother is a bit too much. Braunwyn asked her mother to go with her to a therapy session and her mother suggested that they do Ecstasy instead. With a mother like that, it’s been hard on Braunwyn to stick to her sobriety and the fact she’s doing so is in spite of her mother and not because of her mother.

Braunwyn still went to an AA meeting the next day. She invited Emily to join her and Emily didn’t have to go. She could have held onto her anger. Braunwyn had made fun of her best friend’s apartment for it is a small condo and she didn’t back down when Emily asked her about it. Braunwyn had been proud to be found out for mocking someone else. Emily hasn’t forgotten that and at the same time, she was choosing to move past it now. She followed Braunwyn to the AA meeting and it seems to have done some good. Later on, they all met up. The all ladies all met by the pool and that’s where they found out that they had their own epidemic to worry about. It turns out that Braunwyn’s children have lice.

The adults have all hugged the kids. They were now worried they might have lice too and so that got them talking about the coronavirus as well. They were some that were worried. They were others like Elizabeth who thought it was all smoke. She believed that big Pharma wanted to push a vaccine and for them to do that they have to pretend the coronavirus was something dangerous. The science backing up the coronavirus was in fact deadly. Only Elizabeth wasn’t going to believe it. Elizabeth also talked to the ladies about a text message she sent her husband in which she told him that she regrets filing for divorce. She also told him that she loved him and he hurt her more than anyone else could.

The other ladies didn’t understand why Elizabeth would regret filing for divorce. Elizabeth has been going through this divorce for a while now and she needs to let it go. The other women have been hearing about if for years. They wondered out loud when this nightmare would end. They also said Elizabeth wasn’t ready to be in a relationship and so Elizabeth called her boyfriend her friend. They lived together and they didn’t have sex. This relationship confuses everyone. It makes sense that Elizabeth would miss her ex-husband. It’s not like she was having sex with anyone else. And so that’s why she’s crazy.