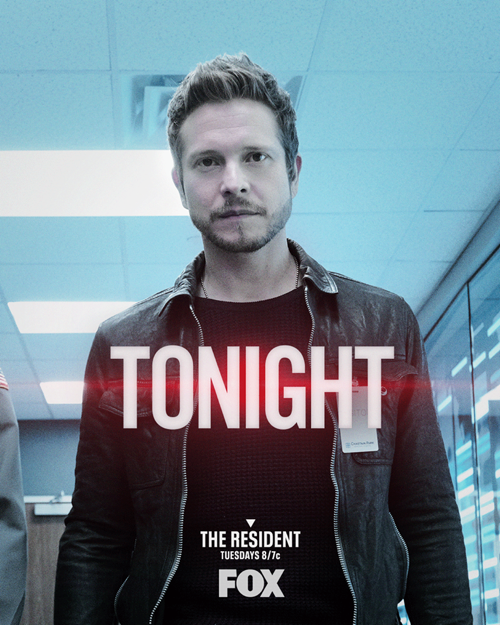 Tonight on FOX their new medical drama The Resident airs with an all-new Tuesday, January 21, 2020, episode and we have your The Resident recap below.  On tonight’s The Resident season 3 episode 13, “How Conrad Gets His Groove Back”  as per the FOX synopsis, “Upon meeting with a high-profile soccer player suffering from mysterious symptoms, Conrad ends up back at Chastain and faces an angry Logan Kim.

When Bell and the Raptor come up empty-handed in regard to a diagnosis, the doctors take note on how talented Conrad truly is. Nic springs into action when she notices Kyle falling into depression and fears he could be suicidal. Meanwhile, Devon butts heads with Irving over patient space and Mina realizes she has become attached to baby Michelle.”

The Resident season 3 episode 13 airs at 8 PM – 9 PM ET on FOX. Make sure to bookmark this spot and come back for our The Resident recap! While you wait for the recap make sure to check out all our television recaps, news, spoilers & more!

Mina is having trouble soothing the baby. Meanwhile, Conrad goes to meet a friend who is a coach. He has a student, named Dax, who had a calf injury that needs a second opinion. Conrad watches the student play for a bit when he suddenly falls to the ground. Conrad goes with Dax to the hospital where Bell and Devon check him out. He needs to be intubated. Conrad steps out of the room.

Nic gets a call from her dad. He was arrested. Nic meets him out in front of the police station. He bailed himself out after what he calls a schoolyard fight. Nic is worried about him. He tells her he is fine.

Mina and AJ visit with her friend who is still in the hospital. She is free of any illnesses, can hold her baby and go home. They are all thrilled.

Devon meets with another doctor from another floor. The doctor is irritated that they have a host of patients who should have been cared for in the ED.

Conrad is confronted outside of Dax’s room by Kim and Dax’s dad, who is very rich. He wants his son to move to St. John’s Hospital. Bell thinks that is a bad idea. Dax’s dad isn’t happy and neither is Kim, who tells Conrad he better not lay a hand on Dax. He can only stay in the hospital as a friend.

Irving brings Devon to meet Riley, a young mom in the ED with nausea and vomiting. Devon blocks the admission. Irving is irritated. He cannot believe he has become one of them, meaning a doctor from the medical-surgical upper floors.

Nic realizes her father has packed his things up at his house. He wasn’t going to tell her he was leaving. He tells her he ruins everything and offers her money from the sale of his car.

Bell, AJ, and Conrad are talking about Dax and how his team doctor missed something with his health. Bell gets a page that he is crashing. They rush there. Conrad helps with chest compressions while Bell and AJ cut into his chest to release pressure and blood. He has a massive hemothorax and needs surgery. Kim sees Conrad and has security escort him out.

Once Dax is stable, AJ and Bell realize they need Conrad for this medical mystery. They need to make a house call. They meet up with him and he thinks Dax has Type B Lactic Acidosis. They run back to the hospital and tell Dax’s dad, who is thrilled. Kim knows that they had help from Conrad.

Devon finds Ryle in the ED alone having a stroke. Meanwhile, Nic calls Conrad and tells him about her dad.

Nic sits and thinks about her dad and his decision to leave. She is pretty sure something isn’t right. Meanwhile, her dad sits in his apartment with a gun alone.

Mina has to show her best friend how to deal with her baby since she has been caring for her. Mina gets a little sad that her godchild is going back with her mother.

Dax is having trouble again. Bell calls Conrad who walks him through what to do. Conrad is sitting with Devon at a coffee shop. Devon tells him about his problem while Conrad talks about his own. They lift each other up with a pep talk.

Nic rushes to her dad’s. He opens the door. She knows what he is up to and she is going to stop him. He tells her he should have died, not her mom or her sister. He destroys everything. He is a failure who is at the end of his life. Nic tells him none of that is true. She pictures him in her future. She needs him.

Bell thinks they need to take out Dax’s spleen. Once in the OR, Bell and AJ notice the spleen looks abnormal. Conrad is watching via video. He knows what is going on and diagnosis Dax. They tell his dad and also let him know that Conrad made the diagnosis.

Conrad receives an offer from Dax’s school, working as the team doctor. He tells Kim about who wants him back at Chastain with some stipulations. Conrad also has his own.

Conrad meets with everyone in the break room, popping champagne now that Conrad is back with them all. He runs home and hugs Nic. Nic is taking her dad to an impatient place to get him some help. They hit the road. Conrad smiles after they leave. He is thankful to have his job back.