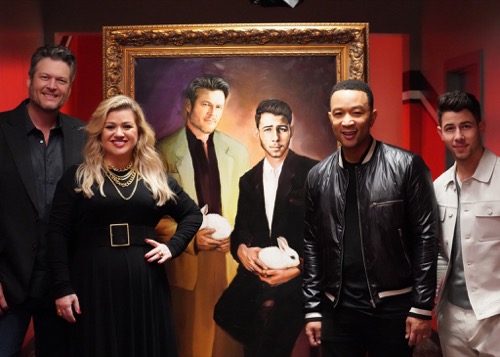 Tonight on NBC’s Emmy Award-winning musical competition The Voice airs with an all-new Monday, February 24, 2020, season 18 episode 1 “The Blind Auditions,” and we have your The Voice recap right below. On tonight’s The Voice season 18 episode 1 “Live Finale, Part 2” as per the NBC synopsis, “In the season 18 premiere, the talent is exceptional and the competition is fierce as Nick Jonas joins returning coaches Kelly Clarkson, John Legend and Blake Shelton as they vie to discover and coach the next singing phenomenon in the “Blind Auditions.” The vocalists compete to be selected by one of the coaches and fight for a chance to be named “The Voice.”

Nick Jonas parachutes his way onto the set with Kelly, Blake, and John looking unimpressed! As the show starts, Blake reminds everyone he has the most wins while John is also determined to win. Meanwhile, Kelly reminds everyone that she won last season and she is ready to win again. New to this season, Nick is also ready to get the show on the road.

The first artist enters the stage to audition. Todd Tilghman sings We’ve Got Tonight, impressing the judges in seconds. They all turn around. Nick stands in awe. After he finishes his song, he explains that he has been married for more than 20 years and has 8 kids, 2 adopted. He needs this! After all of the coaches plead their case, Todd picks Blake.

Nelson from California has been playing him for a long time. He once performed at a bar with Stevie Wonder. As soon as he hits the stage and sings, John turns first followed by the others soon after. They all start fighting for him. All of the coaches make fun of Joe for his proposition to coach Nelson. He chooses John in the end.

Tate has been writing since he was around 11 years old. He is here with his family. He takes the stage. He sings and Ed Sheeran song. His family waits for a while but Nick turns and then Blake. At the end of the song, Nick and Blake fight it out to be Tate’s coach. John and Kelly intervene to plead Nick’s case and how he would be a great coach. Nick gets up and shows Tate a few things. Blake has to one-up him by bringing a puppy on set. If Tate doesn’t pick him, the puppy goes back to the shelter. Nick thinks he should be ashamed. Tate picks Nick.

Knowing that Nick relies on a notebook, Blake runs over on his break and scribbles things in there.

Taylor, who works restoring shoes with her brother, is ready to show The Voice what she has. She has been singing since 14. She takes the stage and has Kelly and Nick turning their chairs fast. They all share what they have to offer. She ends up picking Kelly, who is thrilled.

Ashley is from New Jersey. When she isn’t performing with her partner, she works as a meter reader for an electric company. She is nervous about her blind audition. She is going to perform a bluesy vibe. She takes the stage. She begins her performance and by the end of the song, no one has turned. They all tell her to come back and pick another song.

Darious comes from Chicago. He has been singing with the church since he was younger. He has since been working in the studio and meeting producers. After finding out he was adopted, however, he had a setback. Following all of that he lost both of his adopted parents. Darious takes the stage and after just a few song lyrics, John and Kelly turn. His family goes crazy. After Kelly and John fight for him, he goes with John.

Megan is 17, she is from Georgia and works in a diner with her family. Her mom is one of her biggest role models. She has been working towards this, singing in local restaurants. She takes the stage. After a minute, Kelly turns. The guys turn after the song is over. Kelly has no idea what the hell is wrong with the guys. They all take their turns talking about her talented voice. Nick comments on how young she is and how young he was at the start of his career. He made a lot of mistakes. Before he can go on, John tells him he is depressing them all. Nick finishes up his speech on living life to the fullest when Blake comments that while Nick thinks she will end up in jail, he thinks she will do great with Kelly.

Chrissy, who is 32, is from Brooklyn and she loves Nick. She has been into music since she was young. She was always with her parents until one day her dad just up and moved and started a new family. That was hard for her. She takes the stage. After she sings her song, they turn to tell her she needs some more work, a better song and should definitely come back.

As the blinds continue, Todd takes the stage. He sings Jukebox Hero, getting John and Blake to turn around. Kelly is impressed with his range and that he has brought rock back. Nick is impressed as well as Blake. John gives him his spiel followed by Blake. In the end, Blake wins. John is not happy.

Emily, who is 16 and also a sketch artist, is back to try out for the blinds once again. She sings a Justin Bieber song which she thinks will show her range. She takes the stage and performs. The four of them ask her to come back again, she just needs to polish her craft a little bit more. She gives Nick the sketch she made of him and he gives her a page from his notebook with a stick figure on it to cheer her up.

Joanna is from St. Louis where she lives with her mom and her dog. Her mom is a nurse and so isn’t her grandmother. She always thought she was going into the health field but she wants to make it in music. She takes the stage. She sings “all of my loving” life and gets all four coaches to turn. All of them commend her on her voice and her talents but they’re pretty sure she’s going to pick John. Before she announces her decision Nick interjects and he’s going to fight for her. She goes with Team Nick!