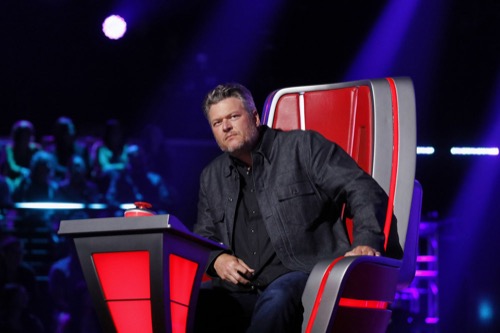 Tonight is the final night of the Blind Auditions. The show opens up tonight with all four judges singing. First up tonight is Micah Iverson, he used to live in Japan but he lives in Atlanta now. Micah is singing, “All I Want.” Everyone turns their chair, except for John.

Judges Comments: Kelly: “You are my favorite kind of male voice singer, all heart and all passion. You have range for days, it sounds so cool. Who influences you? (he says, Kelly).” Nick: “I feel like you and I working together, we could deep dive into emo pop-rock. And that is precisely why you should pick me.” John: “Your voice has this ethereal kind of presence, I regret not turning.” Blake: “I don’t know about emo pop-rock, but I don’t think it matters. I have won this show six times, with rock artists, soul, R&B, county. People will like the weirdness of you and me paired up.” Micah chooses Kelly.

Brittney Allen is 28 from Columbus, Georgia. Music came into her life from her dad, he was the musician in the family. He always says she is living his dreams. Brittney is singing, “Dancing On My Own.” Only John turns his chair.

Judges Comments: Kelly: “I love your head voice, very pretty.” Nick: “If you only you had a coach with more success and more awards to help you along the way. I am down to my last seats and have to be selective.” John: “I love the song you choose and I love the rendition of it. It really allowed us to hear the contours of your voice. It was very exciting for me.”

Tracy Preston is 35, from Preston, Pennsylvania. The neighborhood she grew up in was tough, but she had a lot of brothers that took care of her. She learned to sing in the church choir. She sang backup for R&B singer, Vivian Green. Tracy sings, “Rock Steady.” No chairs are turned.

Judges Comments: Nick: “I am sorry that nobody turned their chairs. There were moments that were really impressive, and others that weren’t quite there for me. I hope you come back.” Kelly: “I am almost full, you were really incredible. I think it is just that you were late in the game, come back and see us.”

Cam Spinks is 29 from Alabaster, Alabama. He is from a small town, works on tractors and does small jobs around the home. His dad instilled in him, hard work. He has written a ton of music. Blake and Kelly turn their chairs.

Judges Comments: Kelly: “The kind of country music that I love and I grew up on, is the vibe you just gave me. It’s a little bit of rock & roll, it’s a little bit of county and storytelling. You have this Travis Tritt thing going on and I love it. You are what is missing in country music.” Blake: “Cam, I hear a lot of elements in your voice that I love. I think you need a coach that can identify what lane you are on. I work with a lot of country singers, I bought a pile of them to the finale and I will be proud to be your coach.” Cam chooses Blake as his coach.

Anders Drerup from Ottawa, Canada has played music professionally on five of seven continents. In the past twenty years, he has worked as a sideman. He will be singing, “Can’t Help Falling In Love,” by Elvis Presley. Anders does a reggae version, Nick turns his chair.

Judges Comments: Nick: “I can hear in your high register that we are going to have a lot of fun flipping thins around.”

Mandi Castillo is 23, from San Antonio, Texas. Her genre is R&B and soul. She is going to sing a Spanish song. It’s a four-chair turn.

Judges Comments: Nick: “Your voice is so phenomenal. When I heard you sing, I thought about how important it is for us to represent. I would love to have a chance to help you grow.” Kelly: “I just got off my Duolingo because I am learning Spanish. I love having bilingual artists on my team. You have a beautiful gift.” Blake: “I love you, I love San Antonio. The only advantage for me not understanding one word you sang is that I was able to concentrate on your vocal ability and it is unbelievable. Incredible sound and I would be honored to be your coach.” John: “I am such a huge fan of your singing. You were suttle but came in with those fireworks and you do it so well.” Mandi chooses John.

Kailey Abel is 19 from Verdigris, Oklahoma. She leads worship at her home church. She is majoring in music therapy. Blake turns his chair.

Judges Comments: Kelly: “A lot of us only have on the seat left, I hope you don’t smoke. That tone of yours is really cool.” Nick: “I only have one seat left but I am very excited for you. You have a great coach in Blake.” John: “I love the tone in the lower points when you growled it was stunning.” Blake: “You have an incredible voice and I would bet the farm on you winning this competition. You have that Bonnie Tyler, Kim Cairns kind of voice.”

Tyrone “Mr. Super Fantastic” Perkins is 68 years old and has been a trainer in a gym for over 20 years. He loves the classics. He wants to prove that there is no age limit, it has to do with experience. Tyrone is singing, “Stormy Monday.”

Judges Comments: John: “It felt catchy and fun, but I wasn’t clear how I could mentor this singer and make you into a winner on the Voice.” Kelly: “You look so sharp, a gentleman. People don’t dress like that anymore. It is all about aligning the stars and timing. I love your talent, thank you so much for being here.”

Gigi Hess is 22 from Lovington, New Mexico. Her musical journey began where her dad used to play his old vinyl for her. She was bullied as a child because of her weight, she had some really dark moments. Her family constantly supports her and she hopes to make them proud. Gigi is singing, “Love Song.” It only takes about 3 seconds and Kelly turns her chair.

Judges Comments: Nick: “Congratulations, you are on team Kelly. I thought it was a great performance, Kelly is a good fit for you.” John: “I would suggest a little less on the runs, that is part of what Kelly will teach you.” Kelly: “I am so happy I didn’t have to fight John for you, welcome to team Kelly.”

Kevin Farris is 33 from Arlington Heights, Illinois. He has been playing music for 15 years, but to the kids, he is just Mr. Kevin. He runs a music enrichment program for pre-schoolers. Kevin is singing, “Home.” John turns his chair, then Nick.

Judges Comments: John: “I felt all of that purity and love you have for music. It was such a powerful thing to here, you are going to be a force to be reckoned with.” Nick: “Your voice has this power, you blew me away. I wish I had a preschool teacher like you, I wouldn’t have failed music in first grade.” Nick gets up to sing with Kevin. Nick says they can do more of that he picks him. John says he sings as well and would love to sing with him. Kevin chooses Nick, tells John that he would love to go for a beer with him.

Allison Grace is 25 from Fort Smith, Arkansas. She is a Marketing Coordinator, but music is her passion. It is difficult juggling it all, her husband fully supports her. She is singing, “Don’t Know Why.” No chairs turn.

Judges Comments: Blake: “I thought it was a great performance, started off a bit shaky, but you brought it together.” John: “Allison you have such a lovely tone of voice, but I didn’t hear enough power.” John: “You can write songs that are perfect for your voice. I would encourage you to go do that.”

Cedrice is 28 from San Diego, California. She has been singing for three and a half years. She has had a challenging journey, she suffers from an autoimmune deficiency. She went through depression in college but met some musicians, and that helped her to find her journey. She will be singing, “Fever.” John turns his chair. The other judges are standing and watching Cedrice sing, they are blown away.

Judges Comments: Judges Comments: Kelly: “You are so sexy, I am so mad. I would have pressed my button. You are freaking fantastic. You are like a goddess, you are so hot.” Nick: “That was amazing, your voice is so electrifying, and powerful when it needs to be. You are a light and a joy to watch.” Blake: “I am so happy for you, John was waiting for his last contestant and it was meant to be that you came out here congratulations.” John: “You are beautiful, you have so much style, nobody else looks like you, sounds like you. I have been waiting to fill my team with someone special, and you are so special.”