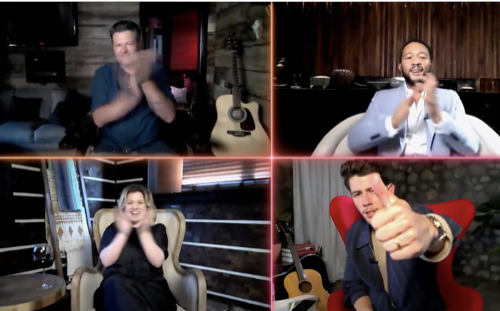 Tonight on NBC’s Emmy Award-winning musical competition The Voice airs with an all-new Monday, May 11, 2020, season 18 episode 14 “Top 9 Performances,” and we have your The Voice recap right below. On tonight’s The Voice season 18 episode 14 “Top 9 Performances” as per the NBC synopsis, “The Voice” Top 9 artists perform in front of coaches Kelly Clarkson, Nick Jonas, John Legend, and Blake Shelton for their chance at a spot in the finale.”

Carson opens the show after a tribute by the contestants and coaches to health care workers. Tonight is the night the finalists will be chosen. It is also Fan Week.

Contestant Joanna talks about the song she chose for her sister and talks about her journey. Blake loves her song choice, Lean On Me. Joanna performs her song from home due to the current pandemic. After her performance, Nick shares his regret of letting her go. The other coaches think she did great.

Micah and Kelly go over his song choice and performance for the week. He is dedicating his performance to Kelly. She claps with happiness. He performs I Will Follow You Into The Dark. Kelly loved his performance. Nick loved the vocals.

Todd Tilman is up next to sing for Team Blake. He performs in front of his children from his home. During rehearsals, Blake shares that he likes his song choice while making jokes that he needs to stop video chatting with those from his church and get to work on making it to the finals.

After his performance, Blake is thrilled for Todd who is crying. All of the coaches think he did great and have what it takes to possibly be a winner.

Carson does a few shout outs to fans. He then introduces Kane Brown back to perform for viewers. Brown sings his song Cool Again. The judges all cheer after.

Zan from Team John is up. Zan and John talk by a video about her upcoming performance. She has dedicated her song to her little brother who loves pop. He gives her a pointer to give her song more edge. Zan performs a song from her hometown. The coaches all love it. John loves her jump from note to note.

Carson reminds viewers that is down to the Top 9 with only able to move forward to the finals.

Nick coaches his singer Thunderstorm, prepping him for tonight. Nick knows he has a strong future in music. A young fan named Katie from NYC introductions Thunderstorm singing a Michale Buble song. The coaches are all very impressed with his rendition of Let Me Go Home.

Kelly and Megan work on her performance from her basement. Megan loves Kelly she has helped her come out of her shell. Kelly thinks she has a strong chance of winning.

Megan performs What Hurts The Most. Kelly thanks her after. She has such a beautiful voice that captures all of the feelings. She is thankful for her voice and reminds her why she sings.

Doja Cat appears to perform. She sings her song Say So.

Back to Team Nick, Allegra is thankful Nick used a save on her. She rehearses with him from her living room. She is dedicating her song to her grandmother who is 92 and has dementia. It is hard because she can’t visit her right now.

Allegra performs her song, introduced by one of her biggest fans from California.

Allegra sings Overjoyed. John believes it was an all-star performance. Nick loved it. She showed all her talents.

James Taylor and his son perform together from their living room.

Blake meets with his singer Toneisha. She sends a huge thank-you to those who have helped her son and her get through leukemia. She sings for Blake, dedicating it to her husband. They just celebrated 24 years.

Blake gives her some tips on her performance. Hope from Orlando introduces Toneisha who will sing Because You Loved Me. Kelly loved it and invites her to sing at one of her shows. Toneisha is ready to cry. Blake shares how special she is and the joy she brings with her talent.

Camm Wess is up next. He plans to sing the song Rainbow, dedicated to his little cousin. John loves his honey butter tone. But he needs to make it his own. After he tries out John’s tips, John is ready to weep.

Camm sings after being introduced by a fan. The coaches love his voice and abilities.

The final 5 will be revealed on the next episode of The Voice.