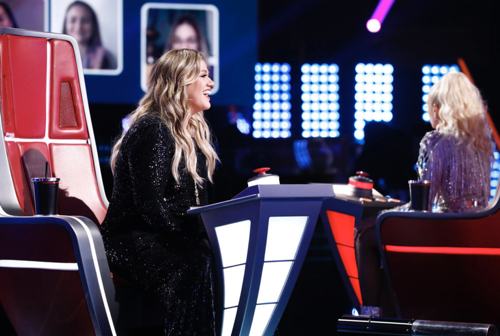 Tonight on NBC’s Emmy Award-winning musical competition The Voice airs with an all-new Monday, November 9, 2020, season 19 episode 6 “The Battles Premiere,” and we have your The Voice recap right below. On tonight’s The Voice season 19 episode 5 “The Blind Auditions, Part 5” as per the NBC synopsis, “The “Battle Rounds” begin as the coaches prepare their artists for a dueling duet. After the vocal face-off, each coach must choose which artist from their team is the strongest to move forward to the “Knockout Rounds.”

The coaches have formed their teams. Now, it’s time to lead them into battle and they were doing so with help from their celebrity friends. Julia Michaels was there to back up Gwen. Miguel was there to back up John. Kane Brown was there to back up Blake. Kelly meanwhile had Leon Bridges. The celebrities were there to act as mentors. They would usually be right there leading the contestant forward and they would also give the contestants a hug but things were different this year. The show even looks a little different this year. There was no live audience and people were greeting each other by touching elbows rather than going in for a hug.

Thankfully, the battles haven’t changed. The team coach would choose two members of his or her team and he would set them up to battle each other. The coach would typically do this with two members that sounded about the same or were in the same field because the Battles help them to trim down their team to just the essential or in this case trimmed down the team to the one person who could win the title this year. Up first was Team Blake. Blake decided his first battle should be with his country’s female stars. He set up the girl group Worth the Wait to battle Taryn Papa and the song was “Little White Church”.

His celebrity pal Kane Brown was especially interested in this battle. He said that right now the top country stars were all men and so he thought the country charts could do with some infusion of girl power. He was hoping one female country star would stand out this year. Only all four women sounded really great with this song. They did Little Big Town credit with their rendition of this song and so it was a tough choice for Blake. It was hard to focus on four women on stage for a battle. He was supposed to be looking for one person to stand out and he couldn’t really do that tonight. The other judges however had all had something to say.

Some sided with Taryn and others sided with Worth the Wait. Blake had a tough making a decision and he ultimately chose to go with Worth the Wait because he realizes he hasn’t seen their full potential just yet. Blake also chose to use his save on Taryn because he really liked her performance tonight. Blake used up his Save to keep Taryn and so he’s firmly putting his faith in his female country artists this year. Next up was Team John. John chose Miguel as a mentor because he knows Miguel knows more about performing a song than just singing it and he wanted Miguel’s help in shaping his team.

John chose for his first battle, Tamara Jade and Olivia Reyes. They were both his powerhouses because they each had very strong voices and so the problem was in the fact that they were both struggling with one thing. Luckily for them, it wasn’t the same thing. Olivia was struggling with projecting emotion in her music. Tamara was struggling with pulling back on her powerhouse voice. Tamara was classically trained. She grew up singing in church and nine out of ten times she’ll reach for that higher note. Miguel and John both believed she needed to pull back some. They mentored both ladies and they believed they got them to where they needed to be.

The true test of this though lies in their performance. The ladies performed the song “Hard Place” and they sounded beautiful together. They also sounded amazing on their own, but there could only be one winner, and that winner tonight was Tamara. John said that her voice had bravado and he also added that Olivia’s voice lacked that. The ladies gave two renditions of the same song because their voices were just that different. John would later say that he might have paired up the wrong two people for his first battle and unfortunately, no one chose this moment to “steal” Olivia. Olivia was eliminated tonight and hopefully, she’ll find her way back on or in a different singing competition.
Kelly’s team was next. Kelly got something in her eye and it developed into an infection. She now has to wear an eye patch. She looks like a supervillain and her depth perception is all messed up. Only Kelly was still enjoying herself. Kelly paired up Madeline Consoer and Eli Zamora. They were both her powerhouses. Eli was a powerhouse in Spanish and Madeline was a Country/R&B powerhouse. They were so different and still Kelly paired them up. Kelly chose a song that was in both English and Spanish. She chose the song “Nobody Wants To Be Lonely”. This song more played into Eli’s strengths and Madeline realized this during practice.
Madeline asked Kelly and Leon what she should do to stand out more. This song wasn’t her genre. It was completely out of the left field for her and so Madeline worked on the song until she sounded like a true singer. Madeline may have been at a disadvantage to start, but she got better and the performance was a unique one. The two vocalists did really well and most of the judges sided with Madeline as the winner of this battle. They found more urgency in her voice. Blake even said that her voice sounded like a cliffhanger because he never knew if she was going to make it or not and each time Madeline always met her notes.
The judges also enjoyed Eli’s voice. They loved the smooth tone of his voice and so it was just the power behind Madeline was what they were looking for and Kelly must have agreed because she chose Madeline as the winner of this battle. Eli was eliminated tonight when no one chose to steal him. Kelly also didn’t use her Save for him and so she was probably holding onto it because she already has someone in mind that she wants to keep on her team. The next team was Team Gwen. Gwen chose for her first battle Lauren Frihauf and Payge Turner. They both had a cool tone to their voices and so it was interesting to pair them against each other.

Gwen saw the uniqueness of each artist. She brought along Julia Michaels because at one point it was Julia that needed to be convinced to take her shot and she credits Gwen for telling her to believe in herself and her voice. Gwen even chose one of Julia’s songs for the contestants to sing. She chose the song “If The World Was Ending”. The song was very apt for nowadays and it actually wasn’t written as a doomsday song. The song was written by Julia’s boyfriend who was basically for his chance. The two got together nine days after this song and they’ve been together ever since and so yeah this song is a romantic song.

It wasn’t a loud or in your face romance song. It has been skillfully sung and that’s why Gwen chose both Lauren and Payge. She believed in both young women. She thought they could do this song justice and they did. They pulled off such a beautiful rendition that the first thing Kelly said about it was that it was intense. Kelly loved both of them and she thinks Payge just pulled ahead a little bit. She also really liked Lauren as well and that’s what Gwen was feeling. Gwen liked both Lauren and Payge. She ultimately picked Payge because she realized there was so much more she wanted to see from her and Lauren wasn’t going home.

Both Blake and John used their Steal on Lauren. They each wanted her to join their teams and so Lauren had her pick. She could choose either one and be happy, but she chose to go with John because she almost joined John’s team last time and he was the only one to pick her in the battle against Payge. Blake had picked Payge. He tried to claim he was strategizing because he really wanted Lauren on his team and no one bought that. Blake lost out and it was his team that went next. Blake had his first Pop/Soul battle. He paired up Jus Jon and Payton Lamar and he gave them the song “Dancing With A Stranger”.

His mentor tonight didn’t really know this field. Kane was a country musician and so he couldn’t mentor as much as expected. It was Blake who took the lead here. Blake has won with many non-country artists and he knew how to get them ready before a battle. He asked Jus Jon to gain control of his runs because he was running out of energy by the second half of the song and so the contestant course-corrected. He changed up how he performed the song. He gave Payton a run for her money and she also upped her game. The two of them had great energy together. They pulled off an amazing performance.

It was once again another tough choice for Blake. Blake wasn’t sure who he should pick and the other judges weren’t much help here. They all said something favorable about both contestants. Blake chose Jus Jon because he really came into his own during the song. Payton was eliminated tonight when no one else chose to Steal her and hopefully her future continues to be bright. Next up was Team John. John paired up Bailey Rae and Sid Kingsley. They both have a soulful tone to their voices and Bailey also had some country in her voice as well. John chose the song “Tennessee Whiskey” for them.

The song has a little country, a little blues, and a lot of soul. It was a great fit for both Bailey and Sid. They each brought something new and exciting to the song. Their duet tonight was one of the best ones so far and it was hard to pick between Sid and Bailey. Gwen chose Bailey. She liked how timidly beautiful her voice was and Kelly chose Sid. She said Sid just edged out Bailey. Blake also agreed with Kelly because it was Sid their eyes were drawn to and so John had a hard time choosing. John could have chosen either of them and he chose Bailey because to him it was her voice that sounded the best.

And Sid was stolen by Kelly who didn’t have anyone on her team that sounded like him.