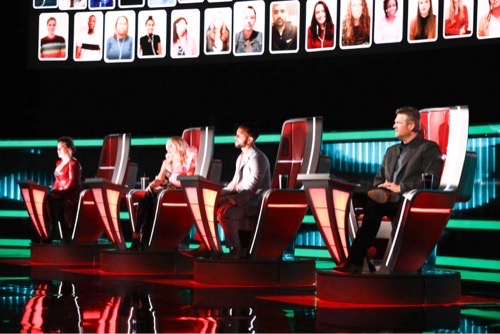 Each coach selects one more artist to move forward; the artist with the next highest votes from each team will compete in the wildcard instant save for the top 9’s last spot.”

Tonight, the Top Nine will be revealed! This the result show. There were seventeen performances in all last night. The seventeen will get knocked down to the best performance from each team and afterward the coaches were given one opportunity to save one other person from their team. The ninth position however went to whoever America voted for. America voted for the artist they loved the most and it had to be done through the app. The app is very important. It’s going to keep coming up throughout the season and so people should download that now while they have the chance.

The first set of results came up. There was for Team Kelly. Kelly has a great team this year and she was very proud of them and so it sucked she had to lose people. The best performance from her team went to Desz. Desz performed “What’s Love Got to Do with It” and it had been a hit with pretty much everyone. She had been amazing. America thought she had been amazing and so she was the first person they saved tonight. The one other member of Kelly’s team that was safe tonight had been Kelly’s decision. Kelly had a hard time choosing and she ultimately went with Cami Clune because she felt Cami was a better contender for the crown. And so Kelly was pragmatic when she made her decision.

Team Gwen went next. America voted to save Carter Rubin. He was fifteen and adorable. He also could sing for his life. He performed “Hero” the other night. He won over some fans with that rendition and so he was the second person America saved meanwhile the first person that Gwen chose to save was Ben Allen. Gwen like Kelly based her decision on who she thought would make it till the end. Gwen was playing to win and Ben’s performance of “There Goes My Life” must have convinced her that he was a strong contender. Gwen had hated having to lose people. She wishes one of them will be saved later on through the Wild Card slot. And until then, she’s just going to have to live with her decision.

Next up was Team Blake. Blake had the most contestants on stage because there was Worth the Wait which was a three-woman group and he also had five slots rather than four like everyone else. America voted to save Ian Flanigan from Team Blake tonight. Blake himself chose to save Jim Ranger because Ranger was one of his personal favorites and he wanted to continue to work with him. He also thought Ranger could potentially win. Ranger has been impressing the audience with his song selections and his latest performance of “Rumor” was another favorite of Blake’s as well as America’s. Blake like everyone else was hoping that America will use the Wild Card to save another member of his team and like everyone else he won’t found out who was saved until the very end.

Team John went last. John enjoyed last night’s performances more than anyone else there and he had been up dancing along with every member of his team. John believes in his team. He thinks America will love them and so he wasn’t worried like the others. He listened in as America voted to save John Holiday. He also spoke up when it was his turn to save someone and he chose to save Tamara Jade. He loved the two members of his team that was saved. He also wasn’t worried about the Wild Card. The Wild Card slot will be decided based on the performance of the remaining members of the teams. Team Kelly had Tanner Gomes in the running, Team Gwen had Payge Turner in the running, Team Blake had Worth the Wait in the running, and Team John had Bailey Rae in the running.

Up first was Worth the Wait. The female country group chose the song “I’m Gonna Love You Through It” by Martina McBride and Blake had enjoyed their performance. He later told them that America will love them as well. However, the others hadn’t performed just yet. Next up was Team Gwen’s, Payge Turner. Turner chose the song “Diamonds” which was perfect for her voice and her rendition was very much hers. There was no one else in the competition that sounded like her. Turner reminded the audience of that fact with her Rihanna song and it was going to be hard to best. Tanner Gomes went next with the song “Pickin Wildflowers” by Keith Anderson. He sounded great and if there hadn’t been another country musician in the running then maybe he would have stood out more.

The same could be said for Bailey Rae. She was a female country artist and she wasn’t alone. She wasn’t even alone in the Wild Card category. There was the Worth the Wait, remember. The country category was well represented. There was a bunch of them and it wasn’t long before they heard back the results.

America voted to save Bailey Rae and so John had been right to not worry.