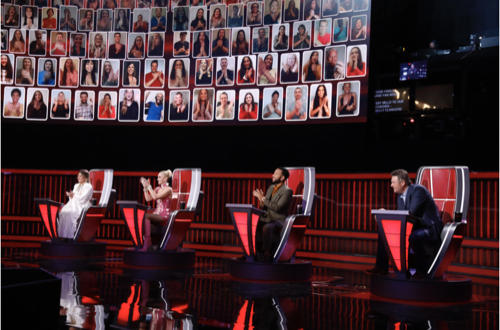 Tonight on NBC’s Emmy Award-winning musical competition The Voice airs with an all-new Monday, December 8, 2020, season 19 episode 16 “Live Top 9 Results,” and we have your The Voice recap right below. On tonight’s The Voice season 19 episode 16 “Live Top 9 Results” as per the NBC synopsis, “On the live semi-finals results show, four artists will be revealed as safe and advance to the finale.”

After incredible performances from your top 9 last night, the top 5 will be revealed tonight. Kelly Clarkson collaborates with Brett Eldridge for, “Under The Mistletoe.”

Time for some lives results, Team Kelly is up first with Cami Clune and Desz. Cami thanks her mom for all her support. Desz thanks her her fans for their support and tells them to walk in their truth and not let anyone say they can’t. Team Kelly’s finalist is Desz. It is not over for Cami yet, she is going to perform later.

Team John is on stage; Bailey Rae, John Holiday and Tamara Jade. Bailey says that John’s belief in her has made her a better performer, to stay true to herself. John says that his grandmother taught him how to love himself when he didn’t know how and this night is for her. Tamara says her fans, “lucky charms,” have always supported her and let her be herself. Team Legend’s finalist is John Holiday.

Team Blake is next; Jim Ranger and Ian Flanigan. Ian says he is a song writer and Is just living his life trying to write the next best song. Jim says that last night was one of the most amazing nights of his life. Team Blake’s finalist is Jim Ranger.

Team Gwen is on stage; Carter Rubin and Ben Allen. Ben says that Gwen’s confidence in him will carry with him for the rest of his life. Carter says that if we all took a second to look at the world through his brother’s eyes, who has autism, they would see the world in a better way. Team Gwen’s finalist is Carter Rubin.

Team Gwen, Ben Allan performs, “When I Pray For You,” by Dan & Shay.

Coaches Comments: Gwen: “That was beautiful, I love that song. I just think that it is interesting that last time I was scared for you doing the up-tempo thing. You are so classic, but yet so current.”

Team Kelly, Cami Clune performs, “When The Party Is Over,” by Bille Eilish.

Coaches Comments: Kelly: “This is the thing, your voice is exactly what you are capable of. We have seen you wale on notes, nail with precision and intention, such tasteful and dramatic kind of notes with your performance, also with where you go vocally, it is incredible hard to sing how you just sang. It was perfect and would not be shocked if you move forward tonight.”

Coaches Comments: john: “You know you have so shown us so much and that rendition was so much fun and I just loved how charming you were throughout the performance. Your voice sounded splendid, it was so exciting to watch you perform. I have had so much fun working with you.”
Team Legend, Tamera Jade performs “Feeling Good,” by Michael Buble.

Coaches Comments: John: “This week, that was incredible. So much power and so much soul coming from you. And, so much personality, I love how it shines through. Your light shines through everything, you are a great human being and performer.”

Coaches Comments: Blake: “There is part of me that is surprised to see you in this position, I feel strongly that America loves you and is going to pull you out of this. This is a one time voice, you are never going to hear this again.”

The instant save starts now. One of the five artists who performed is saved tonight, your fifth finalist from Team Blake is Ian Flanigan.