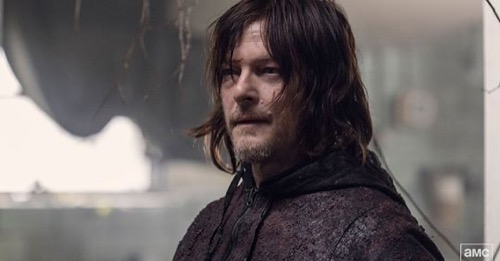 Tonight on AMC our favorite show The Walking Dead airs on an all-new Sunday, October 4, 2020, episode and we have your The Walking Dead recap below. On tonight’s The Walking Dead Season 10 Episode 16 called, “A Certain Doom,” as per the AMC synopsis, “Beta engages the final battle of the Whisperer War.”

Gabriel tries to assure Judith and RJ that everything is going to be ok. Meanwhile, the horde is on the way led by Beta. Others are out trying to help in their own way. We see Maggie, she finds a note that explains who Alpha and the whisperers are. Meanwhile, Beta is still going around with half of Alpha’s face on and he has truly lost it. Ezekiel, Yumiko, and Eugene are still with Princess. Eugene has a cut on his head and doesn’t look too good while Ezekiel and Princess try to fix the bicycle. Eugene is upset because he won’t make his rendezvous with Stephanie. Eugene says it is time to go back home. Ezekiel tells him they are not going back, they set out to do this and he is not letting Eugene quit his journey, and he will carry Eugene if he has to.

Gabriel goes over the plan with the group, they are separating into four groups; everyone is willing to help, but Oceanside is worried that Alpha’s daughter is there and they don’t want to work with her. Carol is stocking up on weapons, Lydia is there and she tells her that she does ‘t hate her for what she did, she was never really her mother, not in the way that matters. Lydia thanks Carol, and tells her that she would like if they could still talk sometimes about whatever. Carol tells her that she needs to protect herself and find her own way. Lydia says she is not looking for another mom.

Daryl helps everyone get prepared, masks on, and blood on their clothes. Negan shows up, he looks clean and tells Daryl that he is not going because he will draw too much attention. Daryl tells him it is crap, he has to put his life on the line like everyone else. Gabriel tells everyone that it is time, Daryl and a group head out first, Judith stands in front of the glass door and watches him go. Jerry opens the door and the horde comes inside, the group is able to get out without being noticed; it’s very creepy. The horde is massive, Carol is amongst the group headed out, many of them look terrified as the walkers come extremely close to their faces. Maneuvering through the horde is not easy. Gabriel is watching, when they see any whisperers they shoot them with arrows and they fall prey to the walkers. Beta is closer to the front and he commands to have the hoard turned. Judith alerts Gabriel that walkers are coming up the stairs.

Gabriel gives the orders, they barricade the door. Negan tells Lydia that she can leave and dance her way through the dead, nobody is going to trust either of them. She tells him he can leave too, he tells her that he is.

Daryl and some of the group are out safely from the horde, Carol and a few other are still inside; two of the women are taken by walkers, Carol can’t help them for fear that she will be taken as well, she just has to keep walking.

Daryl and his group are leading the horde away with loud music, “burning down the house.” All of a sudden, whisperers are there, they shield themselves with a walker in front of them. Daryl, Carol, and the group start to attack them, but they lose the wagon and make a run for it. Daryl says they should go back in there, hunt the skins and take them out. Lydia offers to help.

Gabriel tells everyone that they need to leave. Gabriel is the only one to stay, he attacks when they get through the door, Maggie is behind them and she manages to save Gabriel.

All of a sudden, we see Negan go after Beta, when Negan almost loses control, Daryl comes in to help, he stabs Beta in the eyes, the walkers take over.

Carol is at the front of the horde, at a cliff, she was about to go over when Lydia grabs her hand and saves her. The horde falls to their death, over the cliff. Carol and Lydia get up, Carol thanks her.

Judith sees Maggie and gives her a big hug. Carol and Lydia join the others. Lydia sees Negan and gives him a hug. Carol asks Daryl if he is good, he says yes, it’s over. He asks if she still loves him, she says yes, then he hugs her. Carol tells him that they still have things to do there.

Ezekiel, Yumiko, Eugene, and Princess are still out looking for Stephanie. All of a sudden, big lights come on and what looks storm troopers from Star Wars, come out loaded with weapons and tells the group of four to drop their weapons. We see Eugene shaking like a leaf.