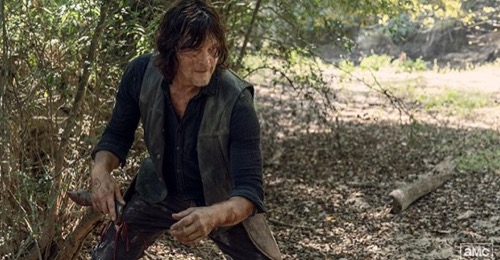 Tonight on AMC our favorite show The Walking Dead airs on an all-new Sunday, March 1, 2020, episode and we have your The Walking Dead recap below. On tonight’s The Walking Dead Season 10 Episode 10 called, “Stalker,” as per the AMC synopsis, “Our group must defend Alexandria from a threatening, outside force.”

Beta is on a mission to find Gamma, he heads to a trailer, drops down in a trapdoor to the underground.

Rosita gets out of bed to check on the baby, she goes to make her a bottle, she hears a noise and sees a walker over the baby with a knife about to stab it, then she wakes up, it was just a nightmare.

Gamma shows up at a camp, Gabriel is there and tells her that they know who she is. She says she is the one that knows Erin, and the people they sent out, they are in trouble, trapped in a cave where Alpha trapped her horde. Gamma says she moved the horde, and she is just trying to help. The baby that they left at Hilltop, it is her nephew, and she would do anything to see him again. Gabriel asks where the baby’s mother is, Gamma says she is dead. Gabriel wants her to show them where the cave is, she says yes. Gamma walks up to Rosita, who calls her a liar and hits her in the face.

Daryl is walking around, some bush area trying not to be seen when he sees two whisperers. Now there is a third, Daryl has a knife, but he is being cautious.

Gamma wakes up, she is in a prison cell. Rosita tells her the last whisperer was in there, Gabriel says he killed him. Rosita tells her that it was the whisperer that they sent to spy on them and he killed her baby’s father two days ago. Gamma says she knows nothing about that. Gabriel says it is amazing how much she says she doesn’t know. He then says she needs to get something straight, she needs to convince them that she is different, or she is going to die. Gamma says she is telling nothing but the truth. Gabriel says is a god-fearing man and he knows that she is holding back, he spoke to him, and he told him to hang her. Gamma says she killed her sister, for Alpha. She then says, do you believe me now father? Gabriel nods yes. Gamma says they need to give her map to lead them to the cave.

A group of whisperers is gathered and one gets a knife thrown at him, then several more get stabbed. It is Daryl, he is trying to take them on. Daryl has blood in his eyes, his vision is impaired, and he gets stabbed in the leg.

Daryl still has the knife stuck in his leg, he needs to get it out and bandaged. He doesn’t look in good shape.

Rosita and Gabriel are getting ready to go out, he tells her that maybe she should stay back.

Rosita tells Gabriel that she can feel that Coco is wondering where he is, and she doesn’t want that for her. Then she tells him that she will see him out there.
Judith is outside the prison, she peeks in the window and asks Gamma what her name is, she says Mary. She says she doesn’t remember much of her life, Alpha has a way of making you forget, now there are just echoes. And, when it all went down, she and her sister made bad decisions, then they met Alpha. Judith says if she met her mom and dad first, she wouldn’t be in that cell, she doesn’t look like a monster to her. Rosita interrupts and tells Judith to go, they are about to go in lockdown.

Where Daryl is holding up, a whisperer is there and she keeps banging on a pole with a pipe to attract walkers to come in and kill him. Daryl manages to pull the knife out of leg in time to kill the walkers. Daryl is exhausted and has very little energy.

Outside, Gabriel gives the orders, he tells Rosita to man the gate while the rest go to the cave. He kisses her before he leaves and says see you soon.

We see a grave, a hand comes out, it is Beta. He has two knives and looks like he is hunting, he is actually in the camp and looking for Alpha. He goes into one of the houses and starts to kill the men there. Gabriel reports to Rosita, tells her there is no sign of a horde of walkers. Rosita starts searching around their camp. Gabriel finally gets it, he thinks that Beta is there, held a knife to Gamma’s throat to set them up. Rosita takes charge, meanwhile, Beta has found the jail cell. Gamma tells Beta that Alpha lied to them about these people. Beta says she was dead the moment she came to them. He tells her to step towards him. Gamma says she is not afraid of him, he says yes she is. Someone comes in to help her, Gamma runs off but Beta is not far behind. He enters the house, and is surprised when Judith shoots him, Gamma is with her and when she tries to pass him, he gets up, he had a vest on. Rosita comes in, he has a knife, so does she. She takes a couple of stabs at him, but he manages to overtake her. Just then Gamma comes in with a knife to her throat, she tells him that Alpha wants her alive. Beta and Gamma leaves the house and start walking back. Gabriel and the rest come upon them, Beta gets away, Gamma tells Gabriel that she is not with him.

The whisperer holding up in the same place with Daryl is Alpha. She asks him if he can see beyond the darkness into the light, he says no. She thanks him for making her strong. Alpha is not in good shape either, but she manages to get up and crawl her way to closer where Daryl is on the floor. Her vision is blurry, she sees someone coming towards her. She sees her daughter, she says I am you and you are me. Alpha takes the knife to her stomach and asks her daughter to help her.

The next morning, Alpha is still alive, but in a lot of pain. She manages to get up, she drags herself to where she sees her knife stuck in a panel of wood, and etched in it, it reads, “your way is not the only way.” Alpha starts laughing.

Aaron returns and tells Gabriel that he got separated from the others.

Rosita, Mary, and Judith are headed to Hilltop.

Daryl is in the woods, Alpha’s daughter has found him, she tells him that he has been sleeping most of the day. He asks if she killed her, she asks if it was his father, could he have.

Alpha is back with her people, she is still clutching her knife. She chants, “We fear nothing, we are free, we are the end of the world.”