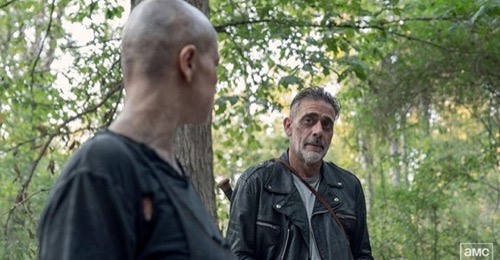 Tonight on AMC our favorite show The Walking Dead airs on an all-new Sunday, March 8, 2020, episode and we have your The Walking Dead recap below. On tonight’s The Walking Dead Season 10 Episode 1¡ called, “Morning Star,” as per the AMC synopsis, “The Whisperers are coming for Hilltop.

After Daryl and Lydia’s encounter with Alpha, the communities must decide whether to run or fight. Meanwhile, Eugene’s communication with Stephanie gets complicated.”

Negan and Alpha are out sitting on rocks, she gives him a stick and tells her to whip it across her arm causing welts. He does it, then she says, now him.

Beta and other whisperers are walking amongst walkers eerily chanting.

We see Eugene, he is talking to someone named Stephanie over the radio. He says he wants to meet her face to face. She says ok, she will talk to her people.

Aaron finally arrives at his destination, he tells Earl hat he has Mary with him, her nephew is Adam, she wants to see him. He says no, she is an enemy and she is not going to see his son.

Ezekiel finds Carol, he says he knows this is Daryl’s place and he thought she needed company. He says the other made it to Hilltop and knows what happened at the cave. He was worried about her, he asks her to come back. Or, he will just sit there with her and they will get eaten by mosquitos together.

Rosita walks into Eugene’s area, she hears someone on the radio and asks him who it is. He shouts at her to leave, his conversations are private and he doesn’t want to say something that he is going to regret. She leaves, Eugene says over the radio that that was a mistake and he is sorry.

Negan gives Alpha some advice, he enjoys a well-deserved massacre and he gets why she wants to take out Hilltop and Alexandria because it would feel good. But his feel good would be to have them surrender, join them.

Alpha’s daughter warns Daryl and the rest that her mother is coming. Daryl says to get the kids out first, they are going to Oceanside. Judith tells Daryl she wants to fight, he says of course she does. Just then, Ezekiel walks in with Carol. They head out on the road and it’s not long before they find a barrier, a pile of wood to block them and a walker hanging from a tree. He tells them it is Negan, he is with Alpha now.

Everyone at Hilltop is upset, Earl tells them to do what they have to do to get their heads on straight, this is going to be the fight of their lives.

Ezekiel is in his bedroom, Carol goes to see him. She sees he has a wound on his neck, he says it is nothing. She kisses him, they end up in bed together.

Mary sneaks into the house to see her nephew.

Ezekiel says she lost her sense of humour. He asks her if this would have happened if it was any other night.

Rosita is outside with Eugene, she says he really likes this girl. She asks him if he wants to kiss her. He looks at her, she says to hurry up before she changes her damn mind. He can’t do it.

Carol goes to see Alpha’s daughter, she sits down beside her, take out a cigarette and tells her that she should hate her, she is going to kill her, meaning Alpha. She tells Carol that she is sorry her kid died and she hates the world, she is sorry her mother is a monster. Carol says she had a whole life. Carol gets up and walks away.

All of a sudden they see rats, thousands of rates, the horde is coming. Everyone is getting ready, giving their last hugs to everyone. Getting geared up with protection and weapons. Daryl wraps the wound on his leg. Eugene sings a song, hoping to gain the attention of his friend, she is back and he is so happy. He apologies about Rosita earlier, and says he hopes she can meet her one day, she is his bff. He says he doesn’t know when they can talk again, she gives him an address, and asks him to meet her there in one week. Rosita comes up the stairs, he tells her to lets to this, he has a date.

Daryl is outside, Carol goes out there and tells him to please not hate her. He turns around to look at her and says that he is never going to hate her.

Daryl walks towards to gate, everyone is geared up and ready. And then, they start coming. The first round of walkers get killed by an electrical fence, but that doesn’t last long to help them. Next is a bobwire fence. Arrows and knives are flying from everywhere. The whisperers have these slingshots and launch these balls filled with gasoline towards them. Negan is with Alpha, he tells her that he thought she wanted them to join her, she says they will, when she is ready. He calls her a badass. Next, it is arrows on fire, the walkers are getting closer. the fence goes on fire, they can retreat to the house where the children are.