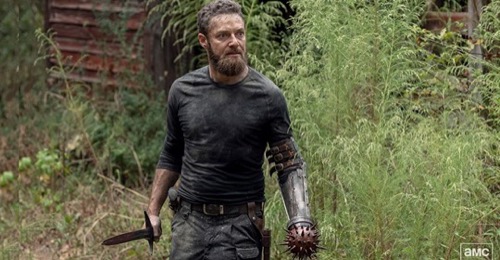 Tonight on AMC our favorite show The Walking Dead airs on an all-new Sunday, March 15, 2020, episode and we have your The Walking Dead recap below. On tonight’s The Walking Dead Season 10 Episode 12 called, “Walk With Us,” as per the AMC synopsis, “Alpha and the Whisperers attack Hilltop, with Negan’s help.”

TWD episode tonight opens with Hilltop found itself under siege from the Whisperers. A huge fire is burning, the fight is still going on. The pile of dead walkers is getting bigger as the flames blazes on. Ezekiel goes to find the children and notices that Judith is not there, she is busy fighting and fights with herself when she is about to kill a Whisperer. Eugene notices that the room where is ham radio is located, is on fire, he takes off to try to save it. The fire continues to burn and Yumiko draws back her bow to fire an arrow and stops. It appears that Magna is now part of the horde. Carol is looking on in disbelief, she looks so very defeated.

The next day, Neegan and Alpha are walking around the dead. She tells him that it is not a victory, she didn’t get everything that she wanted. Beta is there, he tells Alpha that he will not stop until he brings her daughter home. Neegan continues to walk around and bash walkers in the head to kill them. Just then, he sees someone limping away, and it doesn’t appear to be a walker. Neegan runs through the woods and bumps into Aaron who is shocked to see him. Neegan sees the look on his face and tells him to calm down. Walkers start coming towards Aaron, it is Neegan’s chance to run off. Neegan then finds Lydia and tells that this shit is done.

Elsewhere, Alden and Kelly are making their way through the woods with Mary and a crying Adam in Alden’s arms. The baby won’t stop crying, Mary offers to take him and when she does, the baby stops crying and smiles at her. They sit down to have a break, Mary says that if she could do it all over again, her sister would be there and not her. Mary heads walkers, lots of them from all directions. The baby starts to cry again. They find an abandoned vehicle and all get inside.

Mary stays outside, screams for the walkers to follow her. She kills them and laughs when she is pleased with herself for killing all of them. She turns around, Beta is there, he takes a knife and stabs her in the stomach. She tries to fight, but he pushes the knife deeper inside her and kills her. He drags her body towards a tree. When Mary fought Beta, he tore a large piece of his mask off. Another whisperer arrives and recognizes Beta, he kills him too. Mary turns into a walker, Alden is in the distance, and he kills her with an arrow.

Carol is walking around, she sees Eugene having a breakdown with the broken and charred pieces of his ham radio. Yumiko is sitting with Magna, who says she was with Connie, but they got separated. Carol tells Yumiko that she is leaving, she wants to get to the rendezvous point before dark. Yumiko slaps Carol in the face. Magna tells Yumiko that she shouldn’t have done that. Magna says she can’t do this anymore.

Carol goes to sit down and a walker tries to come out of the ground and bite her. Carol slaps it away, then kills it. Eugene tells her that he didn’t mean to intrude, but he wanted to make sure that she is ok. He sits down with her and tells her about his meeting with Stephanie, and now he won’t be able to make it. Carol tells him that if it is important, he should just go to her. Carol gets up and notices Lydia’s weapon laying on the ground.

Daryl and Rosita are leading a group of survivors to the rendezvous point. They reach a shack and it is abandoned. Meanwhile, the children are hiding in a basement with Earl. He goes into another room and hammers a spike through a table. We can see that Earl is about to turn, he has a huge wound on his arm. Judith walks and tells him that he lied to them. He says he did it to protect them. She tells him that he can’t do this, he says he has to, she says she will stay there so he won’t be alone when it happens. He tells her that she is so strong and so brave, and he needs her to keep those kids strong for him. Judith goes back to the other room to be with the children.
Daryl and Jerry find Ezekiel. He tells them that Earl has the kids. We then see Earl hit his head, aiming for the spike. Judith hears the noise and goes back in to see Earl. He misses the spike, she goes near him and he wakes up as a walker and grabs for her.

Daryl finds the children, they all run out. He then goes into the building to find Judith, he finds Judith sitting near Earl’s dead body.

Negan tells Alpha that he found Lydia. Then we see Lydia, she is tied to a chair and trying to get loose.

Negan and Alpha walk towards to where Lydia is, he tells her about when he lost his wife. He says it didn’t matter how frail she got, when she lost her hair to cancer, she was still beautiful. And, when she was gone, he didn’t feel anymore. He tells her that she is just pretending when she says emotions are not real. And now she claims she has to kill her own daughter, her flesh and blood. She says it is her daughter’s destiny.

We see Lydia finally getting loose of the ties around her hands. Lydia is free, she opens the door and she is nowhere near Neegan and Alpha.

Alpha and Neegan are standing outside of a shack, he asks her if she still loves her. She says she has to do this because she loves her, she will always be her baby girl. Neegan and Alpha kiss, Alpha walks towards the door with a purpose, Neegan is behind her. She opens the door and doesn’t see Lydia inside. Neegan cuts her throat and watches her die. He then cuts off her head, puts it in a bag and brings it to Carol. He throws the head on the ground and Carol says, took you long enough.