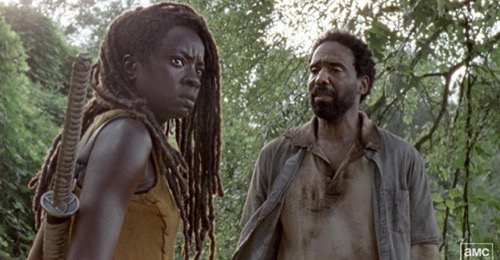 Tonight on AMC our favorite show The Walking Dead airs on an all-new Sunday, March 22, 2020, episode and we have your The Walking Dead recap below. On tonight’s The Walking Dead Season 10 Episode 13 called, “What We Become,” as per the AMC synopsis, “Michonne takes Virgil back to his mysterious island to reunite with his family. In exchange, Virgil promises weapons that could change the tide of the Whisperer War.”

On tonight’s episode of The Walking Dead (TWD) the episode opens with Michonne, she is traveling with two walkers in chains with their arms cut off. She hears a gun go off, and walkers in the distance. She heads a woman screaming, it is Andrea, (Fear The Walking Dead) and Michonne doesn’t help, she just continues to walk.

Next, we see Michonne release Virgil, he is in handcuffs on a small boat with her. They arrive on the island. They both walk until they reach a part of the island that has buildings and a garden. He tells Michonne that the buildings are an old lab, wild animals get in there so it is best to stay away. They continue to walk, arrive at a part that has chairs outside a building with books. Michonne draws her sword and tells him to stop the bullshit. He kneels down and puts flowers on three graves. Michonne asks her why it took him this long to tell her about this. Then she asks him about weapons, he tells her the island is not clear, the others came, they brought sickness and violence. Virgil says his wife and babies are still out there, that is why he asked her to come, needed her to come.

Virgil and Michonne head over to one of the buildings, Michonne goes inside and kills the first walker that she sees. They continue through the building with Michonne leading, She sees more walkers and takes care of them one by one. Virgil bumps into something and makes a lot of noise, it attracts lots of walkers. Michonne goes into full battle mode, tells Virgil to hide behind something because she knows he is of no use to her. They keep searching around and in one room, they find many walks hanging from the ceiling. Virgil notices it is his family hanging. Michonne tells him that she knows this is hard, he thanks her, she tells him that she just wants to get what she came here for, she needs him to hold his end of the bargain. Virgil wants to wait for the morning, she says ok, but they do it first thing.

It is dark, Michonne is outside patrolling and decides to go into a building on her own. Inside, she finds weapons and animal skeletons, it looks like this was an animal shelter of some sort. All of a sudden she sees Virgil, he locks her inside and tells her that she ruined things, she just couldn’t wait to the morning as she promised. Michonne tries to get out, but it’s impossible, she is trapped in a room with a leaky faucet. All of a sudden, she hears other people’s voices, they are also trapped in a room. They say they were researchers with Virgil, they were friends with him.

They tell her that Virgil snapped when his wife and kids died. Michonne says she is not going to be there long. Virgil drops by to see Michonne outside the door, he tells her that he doesn; ’t want to fight, he wants her to understand. Michonne’s hands are on the floor and she hallucinates that someone is in there with her.

Virgil is gone and all Michonne hears is the leaky tap. Then she imagines Virgil in the room with her, he says he sees that she is in pain like him. It appears that Virgil drugged Michonne, she tells him that he needs to think about her daughter and her son, he says nobody thought about his. Michonne then sees Siddiq, he tells her that she was supposed to protect them and she let him die, and Rick and Carl. Michonne screams Siddiq is gone. Then Michonne sees a woman with chains, Virgil tells her to stop fighting it, she is waiting.

Next, we go back to when Michonne left Andrea. Michonne them finds herself on street egging for help, she sees Daryl but he drives off. Then we see Negan, Michonne takes a swing at him but does no harm. Negan gives her back her sword. The hallucinations continue, Michonne sees Rick in many different scenarios, but her vision is distorted to where she is now the villain, wielding Lucille. In the end, Daryl shoots a bow in her chest, kicks her down and Rick shoots her.

Michonne is coming out of the hallucination, she is throwing up in a bucket. Virgil is there with a glass of water, Michonne attacks him and gets outside. The people in the other room also get out, they see the only boat to get off the island, it is on fire. Virgil is running in the woods, Michonne, and the others catch up to him. He says he is sorry. Everyone wants to kill Virgil. It takes everything in Michonne not to do it. One of the women behind her tells her to do it or move. Michonne tells her that taking his life, they will lose more in themselves, it doesn’t settle it, but their mercy, that gives them peace. One of the women steps forward and knocks Virgil out with a weapon.

Virgil is in a cell, Michonne goes to see him and tells him that he is a liar, there are no weapons there. Michonne says she is not going to go back empty-handed. He says to take whatever she wants, clear his debt with Oceanside.

Michonne and Virgil start to look around, this time inside a large boat, she grabs what supplies she can. All of a sudden, she sees cowboy boots, and starts to get emotional, she turns around quickly and shoves Virgil into a wall and asks him where the hell he got them. Virgil says he has no idea where they came from. Michonne starts to look around more, she finds Rick’s cell phone with a photo of her and Carl etched in the glass. She turns around to Virgil and says he knew. Virgil claims he doesn’t know anything. Virgil continues to claim he doesn’t know what she is talking about. He says he has no idea what she thinks he has or who he knows.

Michonne and Virgil are back on land with the others. She tells Virgil there is only one boat left and they are leaving, and they are allowing him to leave with them, a way off this island. Virgil says he promised his wife and children flowers every day. Michonne leaves with the others, Virgil stays on the island.

Michonne is on the boat in a room alone and crying while she holds the cell phone. She has a walkie talkie with her and tries to radio someone, anyone. Judith answers Michonne, she tells them that they miss her a lot. Judith tells Michonne that Alpha can’t hurt them anymore. Michonne tells Judith she found something that could be really important to all of them. She found something that belonged to the brave man. Judith tells her to go find him, what if he is trying to come home too but nobody will help. Michonne agrees to go and find the brave man. They are on the coast, Michonne has to go, she tells Judith she will try, she will head north.

Michonne is walking, she happens upon two people, they ask for her help and tells her they left without her. She looks in the other direction and sees a lot of people walking. She puts her hand out to the two people and tells them to come with her.