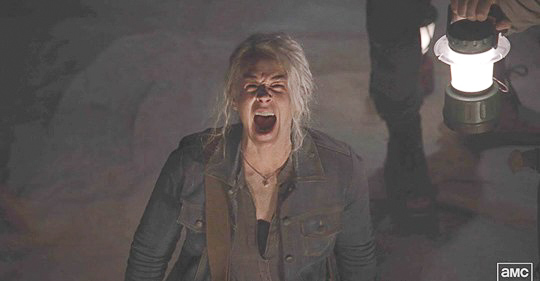 Tonight on AMC our favorite show The Walking Dead airs on an all-new Sunday, February 23, 2020, premiere episode and we have your The Walking Dead recap below. On tonight’s The Walking Dead Season 10 Episode 9 winter premiere called, “Squeeze,” as per the AMC synopsis, “Our group must figure out how to get out of a precarious situation.”

Daryl, Aaron, Carol, and the others work to get out of a walker’s pit. They are forced to jump fro rock to high rock one by one with walkers grabbing their ankles. They make their way through caves by firelight. Carol is having a hard time, she is claustrophobic. Daryl takes a look around while the others rest. They start to argue but Daryl points out that they need to get out of this.

Beta and Alpha meet up at their camp. She knows Daryl and the others have crossed the border. They know about their secret. Negan listens in as he sits at a nearby tree eating.

Daryl and the others rest in the cave. Daryl and Carol talk. He is worried about her and how she has been acting. He wants to help her but she doesn’t tell him anything. Carol shares that she can’t stop thinking about it. She doesn’t want to just kill Alpha, she wants to make her suffer. Daryl tells her she needs to stop, people she cares about are getting hurt. He tells her to stop bullsh#tting him. They need to be on the same team. They need to fight for their future and not for revenge. She promises.

Meanwhile, Magna is walking around the caves when she is grabbed. The others hear and intervene, fighting off others in the dark. They need to get out of the caves. After taking out several others, they start to look for another way out.

Negan approaches Alpha. He hears they are looking for a spy and he thinks that spy is in the camp. He knows its not Beta but the little one who knows where the hoards are. Alpha threatens his manhood. She doesn’t need him creating paranoia.

Daryl and the others push their way through some tight spots and walls in the cave. Carol is having a hard time. Daryl leads the pack as they have to crawl on their hands and knees.

In the cave, Carol begins to really panic and breathe heavy. She freezes up. Daryl has to coax her through. Some of the others are behind her when they realize walkers are in the tunnel too. Jerry is the last in the line when walkers bite his shoes. He is stuck. The others help him fight his way through. He takes off his gear and finally makes it through. They check his feet and it doesn’t appear the walkers made it through his shoes.

The gang moves forward and almost drops hundreds of feet off a cliff. Below is what looks like thousands of walkers. They turn back and make their way through several openings.

Alpha finds Beta to share that there may be a spy among them. She wants him to find Gamma and she will kill her.

Daryl and the others find dynamite and more. Magna just wants to get out of here. She didn’t leave things good with Yumika.

Alpha tracks down Negan and forces him into the woods. He walks ahead of her. She makes him keep his eyes forward and not to talk. They stop. She demands he take off his clothes. When he turns around, she is naked too. She thinks he deserves a reward.

Daryl and the others finally see a way outside. Carol is on the inside still, making her way through several dangerous places where she almost falls. A hand reaches out to her. Its Daryl. He tells her she needs to leave with him. Meanwhile, Aaron and Kelly have made it out to see several Whisperers. They fight.

Inside, the caves, several of them get out. Suddenly, a blast goes off from the dynamite. Magna and Connie are still inside. Daryl is angry while Carol admits in tears this is all her fault. He doesn’t want her to comfort him. He is going to find another way back in.