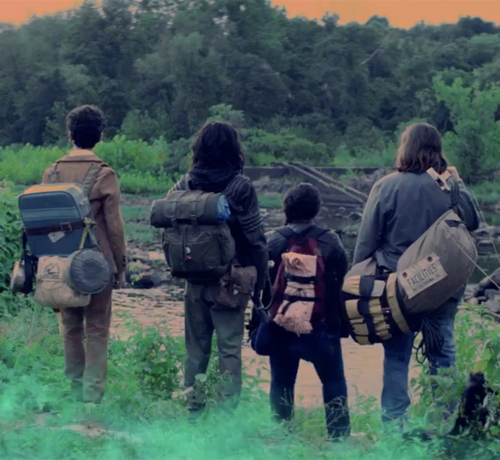 Iris invites Silas to a party that her sister is having, she tells him that he is new and should get out. Iris and other children get on a bus and leave their town. Hope snuck in the luggage part of the bus, with daisies in her hand. They stop at a massive graveyard, Hope gets out and goes to pay her respects at Karl Bennett’s grave. All of a sudden, there are helicopters overhead, Huck says darn and goodbye to her mother.

The helicopter lands, Elizabeth Kublek from the Civic Republic military gets out and is welcomed by Felix Carlucci, Senior Security Force officer, campus colony of Omaha, and Huck. She says she is honored to be there, and we see Hope by the bus, she gives her the finger. Iris and the rest of the group of kids are there to welcome them as well. They all head back to the campus, Hope sneaks back out but Silas sees her, she tells him just to pretend that he didn’t.

Hope is home, Iris made her dinner. They talk about the fact that their dad is with the Civic Republic, sharing his knowledge. Iris asks her to sign Felix’s birthday card. Hope reminds her about the party.

Iris has to write a speech, about Monument Day to commemorate that they made it. Iris lives for her mom who died ten years ago with others, so she could live today and for her father, who is doing important work that will benefit them all. They are ten years in now, she was a little kid and can barely remember the night the sky fell. They still live behind walls and the dead are still in their world. Some people think that it can happen again, that life the way it is now won’t last. Iris is certain of their home and what lies ahead.

It is Feast Day, they celebrate the day, tomorrow, on Monument Day, they remember who they lost. Iris is in class and she gets a note, “pigs raided Hope’s hootch lab, she’s busted for realz.”

Felix has Hope behind bars, he asks her why she does what she does. All of a sudden, Iris shows up and tells Felix that she doesn’t have to be there. Felix has guardianship over the two of them while dad is gone, he lets her out. They head outside and Elizabeth sees the two of them and walks up to say hello. She thanks the two of them for their sacrifice, being away from their father. Elizabeth tries to speak to Hope, and she says she doesn’t have to listen to her crap and walks away. Iris follows Hope who tells her that Elizabeth is the reason why they won’t see their dad again. All of a sudden we see the paper come out of a printer, and it is written safety not assure.

Iris is in therapy, she recalls what happened the night the sky fell in. She is encouraged to talk to her sister and to go all of what she has been holding on to for her.

Huck and Hope are sitting the stands of the arena while a martial arts class is going on. Hope says she wants to go see the city before the world ends. She says people are crap, they turn; it’s the odds. Huck says the world is what they make of it. Huck leaves, Hope is thinking back to that fateful night ten years ago.

Iris gets back to the office and sees the note on the printer. Elton and Silas walk in and say that Elton made a cake with an easy bake oven. Hope walks in and she sees the message from their dad. The guys promise that they won’t tell anyone that the girls are getting messages from their dad. Hope is convinced their dad is in trouble, she tells Hope that there is only one person that can help them.

Huck is with Felix, they are walking together, she tells him happy birthday. The girls show the message to Felix, he says their father is breaking many agreements by sending that message. Felix reminds them that he has to keep them safe, they can’t tell anyone about the messages.

Hope is upset, she leaves the building, Iris follows. Hope tells her that they are bad people and they have their dad. Elizabeth is outside and she overhears, she asks them how they are bad. Iris tells her that they won’t let anyone in or out, and they won’t let them communicate with their dad. She tells them that she has a daughter, she is in the army and she doesn’t see her that much. Elizabeth says she is going to tell them something that is going to make them trust her. Their father is teaching in a Civic Republic research facility in NY state. She hands Iris a coded map. Elizabeth says they are both like their dad, brave.

The next day, Iris wakes up, they slept in their dad’s office. There is another message, “it’s gone bad, keeping my head down. I’ll find help, don’t tell the council, don’ tell Felix, I love you girls.” Iris asks what should they do, Hope says nothing, they hope and they wait. Iris goes to see her doctor, she opens the door when she doesn’t answer and is almost strangled by her, the doctor has turned into one of the dead.

Elizabeth is giving a speech on Monument Day, she tells them that they have done a great thing by giving them, Leo Bennett. Iris goes up to speak, she forgets the speech that she wrote. She tells them that she has had these dreams about being dead, and the person who was helping her is now dead. The night the sky fell, she was just a little kid. Now start with the truth, and the truth is, she doesn’t trust Elizabeth, she doesn’t know who she is or what she is doing. She says someone once told her that she is brave, and she has to be.

Later, Iris tells Hope that they need to go help their father, they know where he is. Iris says she is scared, but she can’t look away anymore. Seeing their mother die, she tells Hope that she shouldn’t have had to do that on her own. We get a flashback to that night, Hope is with her mother, they see a truck and plan to take it to escape. A woman comes near the truck, she has a gun and she says she is taking the truck. She ends up shooting their mother, then Hope picks up the gun that falls out of the woman’s hands and shoots her, she was pregnant.

Iris and Hope discuss with Silas and Elvis what they want to do. Elvis and Silas want to go with them, the girls need help. Elvis knows how to get out, he is the one to lead them away from the campus. Yes she wants to.

Felix finds out that they are gone, Huck tells him that she was training Hope to fight the dead. Felix says he knows where they have gone, and they will never make it, they are going to die.

Its night time, the four are still on foot, Silas and Elvis are talking. Elvis says that his mother was pregnant the night when things went bad, he never saw her again.

Felix and Huck head out of the campus after the group of four who are just about to encounter their first dead walking towards them. Iris offers to do it, she says she wants to it.

All of a sudden, we see the campus, the wall is broken, the dead have gotten inside and we see the dead and some of the children from the campus, on the ground – Elizabeth is there with the Civic Republic military. One of her men tells her that they have searched the campus and the grounds, they can’t find her.