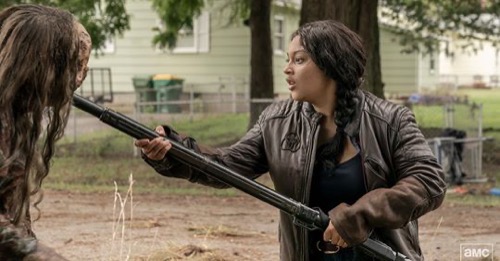 Iris is trying to kill one of the empties she tries to use all the skills she has been taught. Iris falls into a pit over the empties who is still breathing. Hope goes down to help her and tells her that she could have died. Elvis takes pictures of the empties and Iris goes to put it out of its misery, but instead vomits on it. They continue walking and find a lot of rubble and buildings destroyed. Meanwhile, Felix and Huck are still out looking for the four kids. Felix starts thinking back to when his father found out he was gay and told him to get out of his house and don’t return, he doesn’t know him anymore.

Silas is sitting with Iris, he tells her that he didn’t know she could fight like that. Elvis is still taking pictures of the empties.

Felix and Huck come across the empties that Iris attacked, they are on the right trail.

The four are still traveling by foot, Elvis has a spray paint can in his hand. They happen upon an empty, who opens up his mouth and bees start coming out of it. Elvis falls down and spray paints in the face, Silas helps him up and they all run away. Elvis sees a treehouse, he tells the group that could be their shelter for the evening. They all head inside, Hope found a bowling ball, they play a game with it. All of a sudden, they hear an empty, it is the same one that Elvis spray painted. Hope drops her bowling ball on it, hoping to kill it, but it doesn’t work. Silas finds a Monopoly game, the kids all sit down and play together.

The kids are sleeping, except for Hope, she is thinking about when she shot Elvis’ mother. She finds a doll, she lights it on fire and throws it to the ground. The empty goes after it, Hope goes down onto the grass, she has a spear in her hand and she tells the empty to come after her. She lures him to a ledge, he falls over it, but she almost goes over with him. Hope is back laying down with the rest, Silas asked if she got rid of it, she says she didn’t do anything. She tells him to keep this their little secret. He puts on his headset and listens to his music.

Felix and Huck are walking through the neighborhood where he used to live when he finds a can that Hope left on the ground; he knows they are on the right track. The four are on the road again, they happen upon a school bus lot that is filled with a lot of empties. Iris says that they can there is a clear path to go through near an airfield. Elvis says it is all about evasion, the key is not to kill them, it is to avoid them. Hope says they happened upon two empties and they couldn’t kill them.

Silas is worried that they will get caught and have to go back. They decide to leave at dawn. Meanwhile, Huck tries to encourage Felix to rest, he hasn’t slept in 48 hours. They find a place to hold up for the night, but Felix doesn’t sleep. Huck lies down on a couch and gets comfortable. Felix starts to think about home, he returned and his father told him to go away, he wouldn’t open the door to him.

It is almost dawn, Elvis and Hope are awake, she asks him if it bothers him that they are going to end up like the dinosaurs, he says no. He says they are the last of his species, they are special and need to make their lives count. Hope asks if he still has his spray paint, he says yes, she leaves a message that says they were there.

Huck is asleep, Felix gets his things together, he and Huck leave.

The four have also set out, they are right down where the school busses are and their goal is to avoid the empties. Iris tries to go back to her training again, but all the smoke in the blazes of glory is reducing their visibility. Iris tells the group to keep moving, Hope looks terrified. They seem surrounded. They are looking for the fence, but are unable to see it because of the smoke. All of a sudden, Hope sees it and they take off. They have to fight their way through empties. They make it to the fence and on the other side. They stop for a few minutes to catch their breath. All of a sudden, they see more empties and Hope tells them they didn’t do it, they are not even close.

Huck and Felix find the note that Hope left for them, Felix tells Huck that one of them want to be found. Felix finds his house, he looks inside and sees that there are empties inside. Memories come flooding back to when he begged his parents to let him inside. Huck asks him where he went the night before, he says to kill his parents.

The four are right in the middle of the blazes of glory; which is piles of burning tires. Iris blames herself for their predicament, she tells Hope she just wanted to be brave like her, this is why she led them there. Hope tells her they should get some rest, they can do better in the light of day. They lay on the ground to sleep, Hope sits there and cries. She thinks back to a time when she was happy, blowing bubbles. She gets up, puts something over her face covering her nose and mouth, and heads out alone through the blaze of glory.