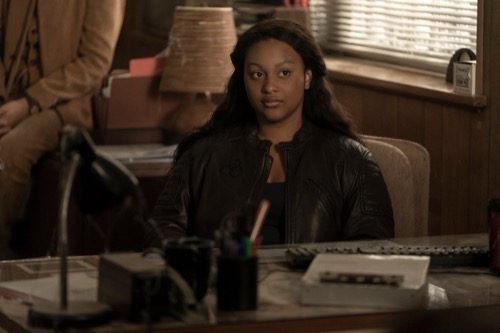 Hope left on her own, she radios Iris and tells her to come through with Elton and Silas.

We go back to Silas’ life, his uncle sponsored him and Felix is explaining everything to him. Silas wants to work with his uncle rather than going to school.

Hope tells Iris that she is in an office in front of a factory, right by the entrance and they should make it a run for it to the entrance. Elton looks with binoculars and tells Iris it is a straight route right to the office like Hope said. The trio picks up their belongings and gets ready. Elton asks Silas if he thinks he can kill any if he has to, Silas offers to take all the bags, he says they can go faster that way.

They head through the Blaze of Glory and Silas loses his way. All of a sudden there is an empty near him and he is frightened, Iris finds him and saves the day and they all arrive at the office safely. Iris tells them they should check out the place until Hope returns, for any food or weapons.

Hope is in another building and has some visitors, some empties coming towards her. Back to the trio, they find some food and supplies. Elton calls Silas over to help him open a door and when he does, Felix and Huck come out. Felix asks which one of them left the bread crumbs, the sign, the can of peaches. It wasn’t the three of them. They want to know where Hope is, but Iris won’t tell, she says this is Hope’s plan and they will just have to wait until she returns.

We see Silas cleaning up Iris’ dad’s office when she comes in and finds him holding a family photo on his desk. She tells him that her father left, she misses him and her sister is mad at him for leaving. But, everyone’s family has something.

Hope is trying to figure out how she is going avoid becoming food for the two empties in the building with her when they break through the makeshift door, Hope makes a run for it outside.

Felix asks why Hope left like that on her own, Silas says he thinks she is trying to atone for something she did. Hope says she has no idea why Hope is doing this, she doesn’t care about her mistakes or anyone else’s, she just wants her to be safe. Silas tells Iris that he is afraid of him.

Hope radios Iris, she tells her that she found the siren, but the bad news is that the crank is broken. Felix comes on the radio, he says he is there with Huck. Hope won’t tell them where she is, she says the moment she sounds the siren they can run to the exit and she will meet them there. Iris encourages Hope, tells her she is not mad, just get to the exit. Hope asks her to promise to come back for her if she doesn’t make it. Iris tells her that they are all going to make it, and if she doesn’t, she will kill herself.

Silas tells Elton he doesn’t think he can do this, Elton and Iris tell him that he can. Meanwhile, Hope tries to fix the siren, and it goes off. The group, now of five with Huck and Felix, head out. Silas is having a hard time keeping up. Meanwhile, Hopes stops the siren, she needs to get out of there. Silas is thinking back again, this time it is of a poem about a tiger that he picked up on the floor of Iris’ dad’s office. Hope lights a lighter and throws it into some black oil that sets ablaze.

All of a sudden, Hope is taken on by two empties, she kicks them off but in the process, she falls to the ground and bangs her head. Iris is there, she tries to help but is overtaken by an empty. Hope gathers her bearings and kills the empty before he kills Iris. Silas is just standing around when a fenced wall starts to come down, he holds it until everyone gets past, then lets it drop which blocks the empties and saves the group.

The group has arrived a lake, they washed their clothes and Elton is fishing. Huck tells Hope that she should have come to her. Then she tells her to think about what she wants, everyone is counting on her. Felix tells them that they should pack up and get walking. Iris and Silas tell him that they are not going back, and neither is Elton or Hope. Felix tells them that they are going to get themselves killed. Hope says it would be good if the two would go with them, but with or without, they are going to go and find their dad.

Hope is alone with Iris, she tells her that she is scared and the night that their mother died, it was her. The pregnant lady they saw that night, she came back and had a gun, she freaked and Hope went at her, she shot their mother. Hope blames herself for scaring the woman. She says she then picked up the gun and shot the woman. She never told her because she didn’t want to change the way she thought about her. Iris says she had a feeling she wasn’t telling her everything, but they were just kids, the sky was falling and they weren’t prepared for it.

Hope is crying, she tells Iris that she is sorry. Iris hugs her and tells her that they are going to get through this, they have to. Felix walks up to them and says they should go to Omaha where it is safe, this is a mistake. Felix says he is going with them until he can convince them to turn back. Hope says she is sorry that she dragged him into this, but she is happy that he is there.

It’s late in the evening and Elizabeth has a visitor, it is Sargent Major Parker. He tells her that he has been walking the city and found himself there. He can’t get what they did out of his head, she tells him to stand at attention. She tells him that he knows exactly what they did. He says they neutralized the threat. Then he says, with respect, they didn’t seem like a threat. She turns on the gas stove, the fan, the radio, and the TV. She says they have energy, water, medicine and transport, the schools, manufactures, etc., they are the last light of the world, the last hope, and they enable this population of two hundred souls to live. She says they didn’t seem like a threat, but they were going to be.

He says he doesn’t know if he believes that. She tells him to sit down and make him some soup. There is a knock at the door, she tells him to answer it. He gets up, it is security, she tells him that he will be remanded to CRM health and welfare complex until he is ready to serve again. He tells her that he doesn’t think he will ever be able to serve again. Then he asks her if she ever thinks about how many people died. He screams that it is a lie and she knows what they did as they drag him out of her apartment. She sits there and turns back on the television, the gas stove, and the radio, and looks like she is about to cry.