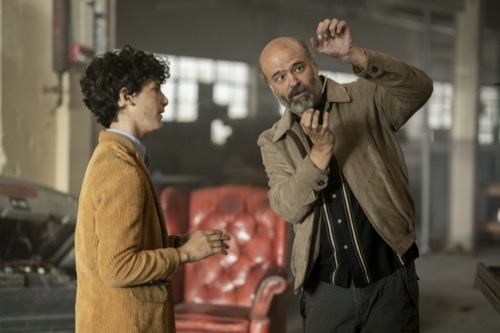 Huck is dreaming, she wakes up and goes forward with her day. She is still on a scouting mission and walks towards the road when the others show up in a truck to pick her up. Huck sits down with Felix and shares a Mountain Dew that she found with him. She tells him that as long as they keep to the side streets they should be found. It seems that the group has now accepted Percy and Uncle Tony as part of their team.

They have a map, Tony says they are hidden CRM fuel. Tony asks Felix where he is dropping him off, he says he doesn’t know yet. They are trying to find the girl’s father who is in a facility in New York.

Huck flashbacks to her past and her military career. There is a news report, a fifth hospital has gone into lockdown and refused patients.

Back in the present day, Iris and Percy are looking through the map she got before she left the university, it pinpoints them to where their father is.

Tony tells Felix that he is happy that Percy is spending time with kids his own age. Huck tells Felix that she is tired, killed an empty and it brought back memories. Tony pulls out a flask and the two start drinking.

Percy pours some alcohol for the teenagers, Silas doesn’t want any. They sit on some couches and take a little time to just be kids, they play truth or dare. Hope gets the truth and Percy asks her what is the worst thing that she has ever done. She lies and tells them she laced the teacher’s coffee with laxatives once. Percy tells her that is not the worse, she is hiding something. Hope says there is something else, the worse thing she has ever done is play this stupid game. Hope leaves the game, Elton goes after her but she tells him that she needs to be alone.

Huck is looking back again, she and her team are being sent into the city and if they have any problems whatsoever, even with the living, they are to kill them. Her marine comrade tells her they should just start shooting everyone, even though they don’t know which are empties and which are alive. The received orders from central command, the marines are told to kill all targets in their target, civilian or hostile, living or dead. Huck is in shock about the order. Her captain tells her that any marine who fails to follow the orders will be brought up on charges.

Hope finds Huck on the roof, she confesses that she killed Elton’s mother and she shot Hope’s mother. Huck tells her that she was a kid and she killed her mom in front of her. She says Iris knows, but not that it was Elton’s mom. Huck says you can’t change what was done, but the light will come, she promises her.

The next day, the group goes out to find oil in the CRM. Silas and Elton stay back at the truck. Hope wonders away from Huck, she finds her, and a man named Walter, he has a knife to Hope’s neck, he has been bitten. Huck tells him that they are just scavaging. He says he woke up and his brother turned, Huck, tells him he is not going to last much longer with that leg. Huck tries her best to calm him down, tells him that she is just a kid and he should focus on her. Felix and Tony are together, they are also looking around, they hit the jackpot and find the fuel.

Huck manages to get the gun from Walter, she shoots him. Felix, Percy, and Tony coming running into the room, they say they found the fuel.

Tony talks to the group, he says that Percy and he want to stick around and help them find they are down. Everyone goes to get some sleep, they are heading out at first light. Percy is flirting with Iris, Silas looks on and he doesn’t like it. Elton tells Hope that he is sorry about what happened to her, he is happy that she is alive and still with them.

Hope agrees to meet Percy outside, he has made a romantic spot for the two to spend time together. While waiting for Percy, she falls asleep. He doesn’t show up, she goes back inside to find him. But what she finds instead is Tony, he has had his head bashed in, Silas’ coat is nearby and they see another body, Felix goes to investigate, it is Silas, he has blood all over him and he looks drunk.