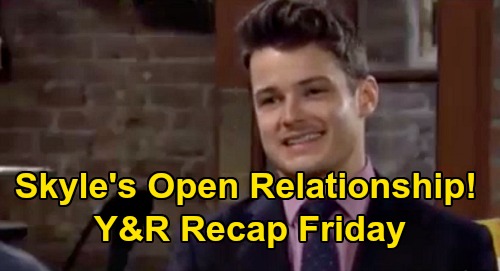 The Young and the Restless spoilers recap for Friday, August 21, tease that Abby Newman (Melissa Ordway) will find herself intrigued when she spies Phyllis Summers (Michelle Stafford) on the phone talking about something that seems big. Abby will go sniffing around for information, needling Phyllis and wondering if Phyllis might be in financial trouble.

Phyllis will balk, telling Abby that she’ll find out her big news when everyone else does. Later, Phyllis and Abby will continue their bickering, and they’ll trade insults in typical fashion.

That will make Kyle sweat a bit, then Nick will reveal that he was just putting Kyle on. Kyle will get back at Nick by pretending that he and Summer now have an “open” relationship. Nick will be ready to strike when Kyle reveals that he’s just kidding.

Afterwards, the conversation will turn serious, and Kyle will tell Nick that he will do everything in his power to protect Summer, and that he doesn’t ever want to hurt anyone the way he hurt Lola Rosales (Sasha Calle).

Kyle will tell Nick that the time is right for his relationship with Summer, and that the two of them waited a long time to be together. Nick will ask if things are really over with Lola, and Kyle will assure him that Summer is the only woman in his heart.

Over at Society, Theo Vanderway (Tyler Johnson) will be distracted as he waits to hear about whether he got the position at Chancellor Communications. Theo will talk with Lola, saying that the best part about this gig would be that he did it on his own.

Lola will talk about her career as well, saying that she wants to make a name for herself in Genoa City, and she’ll encourage Theo, saying that she’s sure he’ll get the Chancellor Communications job.

At Chancellor Communications, Amanda Sinclair (Mishael Morgan) and Billy Abbott (Jason Thompson) will compare notes on the Theo hire – it will turn out that Lily Winters (Christel Khalil) agreed to the hire, but Billy will still be having reservations.

Amanda will think that Billy should take the risk and hire Theo. Talk will turn to Ripley Turner’s (Christian Keyes) upcoming trial, and Billy and Amanda will rehash what happened with Victoria Newman’s (Amelia Heinle) stabbing and their past friendship.

Back at Society, Kyle will see Theo, noting that he hopes the Chancellor Communications job works out. Kyle will leave to go talk with Lola, and Theo will get an incoming call from Billy.

At the bar, Lola will learn from Kyle that their divorce will be final soon. Kyle will wish Lola the best, and after Kyle goes, Lola will learn that Theo got the Chancellor Communications job. A celebration will be in order, and Theo and Lola will agree to a date.

Finally, back at Chancellor Communications, Billy will head out for the night to spend some time with his kids after telling Amanda thanks for the talk and for the advice earlier. And over at the Grand Phoenix, Nick will regroup with Phyllis, who will tell him that she’s got an assignment for him.

Friday’s episode of Y&R sounds great, so stay tuned! We’ll give you updates as Y&R news comes in. Stick with the CBS soap and remember to keep CDL bookmarked so you don’t miss any of the latest Young and the Restless spoilers, updates, or news.